Check this excerpt from Part One of an excellent three-part series on the political greenwashing of the tar sands in Canada, written by Jeff Gailus at Desmog Canada:

When I hatched the idea to write a book about the use of spin and propaganda in the battle over the tar sands, a close friend of mine suggested I avoid the term “tar sands.” His logic was simple: using this term, which has become a pejorative, would turn some people off, people who might benefit, he said, from reading my book. 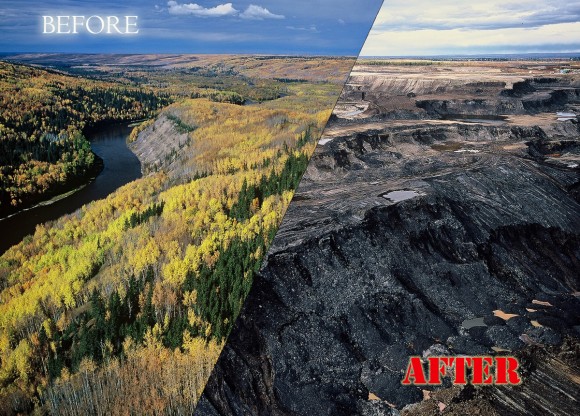 His recommendation was meant to be helpful, but it speaks to the power of manipulating language to make people believe something appears to be something that it is not. “Greenwashing” refers to the strategy of intentionally exaggerating a product’s environmental credentials in order to sell it, and nowhere has greenwashing been more generously used than in the promotion of the tar sands and the new and bigger pipelines that proponents hope will carry it around the world.

Greenwashing is fairly recent phenomenon—it was only added to the Oxford English Dictionary in 1999—but it has become commonplace as public concern has grown over the spate of environmental problems we now face, and as consumers demand “greener” products as a means of solving them. The most recent analysis by TerraChoice Environmental Marketing found that although the number of green products is growing, the marketing of more than 95 per cent of them still commits one the seven sins of greenwashing.

The most egregious of these greenwashing efforts include such misleading efforts to market coal as “clean,” which is simply an Orwellian way of referring to the dirtiest of all hydrocarbon energy sources; greenhouse-gas intensive shale oil as faux-green “EcoShale”; and, yes, the characterization of the pollution-laden and climate-warming tar sands as a responsible, sustainable, even “green” source of energy.