When it came time to watch television last night, I already knew Michael Phelps had defeated Ryan Lochte, Gabby Douglas was an all-around champion and the U.S. women had won the gold in rowing. But that didn't stop Kim and me from watching the Olympics for four hours. And we were not alone. It seems the tape-delay strategy is paying off (in a whole bunch of moola) for NBC. Read on.

• A few months ago, NBC considered these Olympics to be a loss leader. Lose money now but make it back thanks to increased awareness of the network's new fall prime time shows. But something weird began to happen this week. The ratings were higher than NBC expected. And higher ratings mean more money (I could go into the reasons for that, but it's complicated and time-consuming so just trust me on this one) for the network. Despite all the criticism for waiting until prime time to show the key events in an era of instant knowledge, NBC was still kicking butt. How was this possible? Yesterday, the folks at the network released the results of a survey that not only surprised us, it seemed to surprise them as well. It turns out, people who know the results prior to the prime time show still want to watch it. And those who watch the web feed live during the day watch even longer than others at night. So despite the criticism of NBC's policy (I'm one of the critics), it seems to be working well – so well the network expects to break even financially from the Games. But why is this happening? I have a theory. Call it the Frontrunner Theorem. It's simple. Americans are winning (the most recent medal count has the U.S. on top with 38, with 18 of those gold). The American public likes winners. So the American public is tuning in to watch Americans win. If the U.S. team was bombing, then so would the ratings. A simple cause-and-effect result. So the next time you catch the NBA announcer seemingly rooting for the American athlete or team, understand it is for the most basic of American reasons: It helps their paycheck. And in this economy, that's a reason we can all get behind. 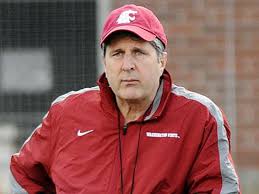 • Washington State: The Cougars opened the training camp portion of their season yesterday and of course Christian Caple was there – and here. He put up a blog post yesterday (wait, make that two because he also posted this video interview with one of my favorites, Wade Jacobson) then followed up with his usual morning post today. Plus he has this story in this morning's newspaper. ... Christian's morning blog post also covers items from around the Pac-12, though we like to find a few more links for you. Included in that is this story from Myrtle Beach, S.C., about a WSU transfer, a guy we liked to call "Big Joe" the past couple years. Joe Kaleta, one of the biggest players on the WSU squad, is now at Coastal Carolina. The story includes this line from the offensive line coach: "Big guy, obviously, but not a big heavy-footed guy or anything like that. We think he can move around pretty good ..." Now Joe was 6-foot-8 and more than 300 pounds, so the big part is unarguable. However, Kaleta, while quite possible the nicest guy you can meet on a football field, was also one of the slowest moving individuals I've ever had the pleasure to cover. In one-on-one blocking drills, Kaleta made contact about as often as a street sign. So if the Coastal Carolina offensive line coach thinks he "can move around pretty good," maybe it's time for the coach to look into a new profession (and to learn when to use "well" instead of "good"). ... Christian mentioned this, but I can't skip the first coaches' poll of the preseason. LSU is No. 1 and Alabama No. 2. No one will ever accuse college football coaches of having imagination. ... A couple quick basketball notes. The WSU team is en route to Australia for a tour while former Cougar Klay Thompson is part of a Golden State team that is hoping to improve its defense. ... Just when you think the NCAA can't get any more intrusive, the organization decides to give itself more power.

• Gonzaga: The Oregonian has more on St. Mary's most recent basketball commit.

• Idaho: The Vandals have new helmets and a new attitude as they open practice. Josh Wright has the information in this blog post and story.

• Indians: Not a lot of pitching (or defense) for the Hawks last night in Boise as the Indians posted a 15-1 victory. 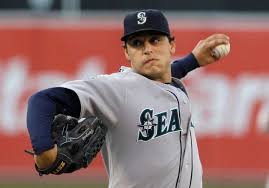 • Mariners: As the M's traveled from Seattle to New York, they had a day off yesterday. Their recent win streak, and the reasons behind it, is still very much on everyone's mind as are the newest members of the team. Will all this add up to a run for a wild-card spot? ... If the M's are going to compete for the postseason, the bullpen will have to stay strong and Jason Vargas (right), the American League's best pitcher in July, will have to keep the same form. ... The A's, who the M's are chasing for the wild card, decided to roll the dice and call up their top pitching prospect.

• Seahawks: Social media can do anything, even lead to an NFL career. ... Cortez Kennedy didn't need Facebook to get acquainted with quarterbacks. He was more adept at offering them a faceplant.

• Sounders: While Kim and I were watching the Olympics upstairs, the offspring and friends were watching the CONCACAF Champions League match with Caledonia AIA downstairs. But that doesn't mean we didn't know the score. All we have to do is count the explosions of noise to know how many goals the Sounders have. Last night, there were three and Seattle went on to a 3-1 win, powered by midfielder Andy Rose's two assists and one goal.

• Olympics: Those also serve who only stand and wait. It's the final line from an old Milton poem (I was an English major remember) and also appropriate for Rich Landers' story on Jamie Redman.

• I left clues where I was playing golf yesterday in this space and southhill24 figured them out. Yes, I played Qualchan, though through a combination of good luck and just enough skill, I didn't drown as many golf balls as I expected. I'll have to try harder next time. Until later ...