It's Sunday, the one day of the week when you are supposed to take time to reflect. So we will. Come along if you like. Read on. 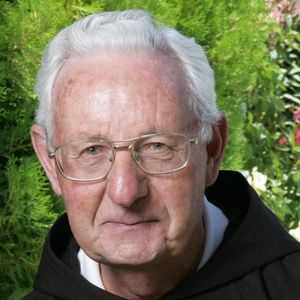 • Sunday is also the day for church for many of you, so the story I'm about to tell is a two-fer. It's reflective and it's about a man of God. The story is rooted in the past but it's here today because of an email I received this week from my oldest friend, Kent. It spoke of the death of a priest from our high school. And it spoke of my friend's admiration of Fr. Fintan Whelan (pictured), who passed away in August (which just goes to show, even in these fast-paced technologically robust times, news about one man can move slowly). As I read the email, it made me realize I never had a chance to thank Fr. Fintan for one kind act that saved my life. Not literally, like pulling me from the path of an onrushing train, but figuratively, allowing me to stay on a track that led to this moment. See, I never would have been a writer if it weren't for my physics teacher. You might be wondering how those dots can connect, so I'll tell you. ... I really was kind of floating after my junior year at St. Francis High, knowing I wanted to go to college but willing to settle for whatever school would take me. Then Kent decided he wanted to attend UC Irvine. That made up my mind. I wanted to attend UC Irvine as well. But there was one problem. I was one math or science credit short of qualifying for a UC. As you probably know from reading this blog, math and I aren't real tight. In fact, we're sort of like Peter Griffin and that big chicken he's always battling with. But I needed one more class, so I tried Algebra II over the summer at Pasadena High. I failed miserably, dropping the class before I flunked it. That left a science credit for my senior year. Chemistry was out of the question with my schedule, so I opted for physics, taught by one Fr. Fintan. Though I loved the class, loved the idea of the Doppler Effect and all those laws Newton discovered, I struggled. There was only one way I got through the tests: charity. Or payback if you will. See, I helped Kent in English (Shakespeare and Kent were as close as Peter and the chicken) and he helped me with physics. And by helped I mean Kent made it easy for me to see his solutions to the physics problems in class. OK, call it what you will. But I'm just calling it "help" and not going any further. (It might be considered ironic but at the same time I was earning an "A" in the senior-mandated ethics class taught by Fr. Edna; yep the Lord moves in mysterious ways.)

• Anyhow, as our senior year wound down, I was accepted at UCI on a conditional basis, predicated on passing physics. And this is where Fr. Fintan changed my life. I'm sure if I hadn't gotten into Irvine I would have ended up at Chico State, where I would have received a fine education. But I would not have met Kim, who not only straightened me out, but is probably the only reason I didn't embrace a lifetime of crime. Which brings us to the physics final my senior year and to another aside. If you are anywhere near my age, you know 1974 was the dawn of the calculator era. Texas Instruments was revolutionizing the world one cosine at a time. And Fr. Fintan, a good, liberal Irishman, embraced the change, allowing calculators in the classroom. I had one problem. We, the Grippis, didn't own one. My dad – a Depression kid – wasn't about to waste money on something so, well, wasteful. But he understood my need, so he asked around and found a calculator he could borrow from a friend. There was one problem. It had a little printer attached. And made a boatload of noise. But being a beggar, I chose to say yes and off I trundled to the final. Fr. Fintan passed out the test. I knew I needed a score in the 70s to pass the class but that wasn't going to be a problem. Kent was on his way to another 98 or higher, so all I had to do was make a few glances, figure out the work and viola, I would be headed to Irvine in the fall. The test started. I waited a minute, glanced over to Kent's paper and saw the answer to the first problem. I wrote it down and started to figure out the calculations. I plugged a couple of numbers into the TI and hit a button. Like a perverse game of "Whack A Mole," everyone's head popped up. Man was that calculator loud. Jim Fiedler raised his hand and complained. He always complained. Fr. Fintan trundled down the aisle to where I was sitting, took one look at the beast on my desk and stopped. Finally he brightened. He had a solution. "Grippi," he said with that slow Dublin brogue, "sit in the back of the room. It will be quiet enough back there." Fiedler smiled. I almost cried. Alone in the back of the room, there was no way I was going to pass this test. UC Irvine was out. My life was ruined. A career holding a highway sign awaited. I was doomed. Then Fr. Fintan saved my life. He leaned over and whispered to Kent, "Hollenbeck, go sit back next to Grippi. I don't want him to flunk."

• I've thought about that day a lot over the years. Why did he do it? He knew what I was doing. He knew it was inappropriate. It went against every ethical standard the Capuchin Friars had taught us, every cannon each knot on his rope belt stood for. It was situational ethics at its worst, the ends justifying the means. But he also knew I tried my best in class. Studied hard. Worked at it. Failed. He wanted me to succeed, liked me a little I think. He knew I was never going to end up a physics genius, an Albert Einstein or Sheldon Cooper. I was just trying to get by, to find my path. And he helped me stay on it. One small act helped make me who I am today, the guy who is supposed to write about sports but instead bores you with a story from his childhood. I don't care. I never had the chance to thank Fr. Fintan – OK, truth time, never took the chance – and I wanted to do it. Publically. Openly. I know in my mind he'll never hear it but in my heart I believe he will.

• Washington State: The Cougars return to the court today to take on Fresno State and Christian Caple will be there for you. He was also there for you yesterday with this blog post about the chance linebackers coach Jeff Choate is headed to UTEP and this morning with a story on DaVonté Lacy's comeback against GU. He also has his usual morning post. ... The Heisman was handed out last night and, for the first time, a freshman earned college football's top prize.

• Gonzaga: Last night was not the best defensive effort the Zags have put together in the Kennel, dropping an 85-74 decision to Illinois. Jim Meehan was there and has this game story and blog post. And before you start going all ballistic about the loss, read this piece from Gary Parrish. Illinois is pretty good this season. ... BYU won the battle of the Beehive State, topping rival Utah in an entertaining game. ... USD got a big piece of its puzzle back and a big win. ... Portland was boatraced in Kentucky. ... The Gonzaga women host Cal State Fullerton in a non-conference game today.

• EWU: It's on to the FCS national semifinals for the second time in three years for the Eagles after they outscored Illinois State 51-35 in Cheney. Jim Allen was there – was there anything stranger than the kickoff-return touchdown that wasn't? – and has this game story. John Blanchette also has a column on the Eagles quarterback, a Texas import. ... Weber State is tough to beat at home.

• Idaho: The Vandals traveled to El Paso and couldn't hang with the Miners. Josh Wright has a blog post. ... San Jose State won its third consecutive game. ... Utah State welcomed home a player whose life was in the balance last week, then went out and won handily.

• Chiefs: OK, so the Chiefs aren't perfect two time zones east of here. They finished their eastern swing 5-1 after a tough loss Saturday night. ... Portland had no trouble getting past Seattle.

• Preps: Usually wrestlers try to cut weight. U-Hi has one this year who put on 50 pounds. But he's still winning. Mike Vlahovich has the coverage of the Inland Empire Wrestling Tournament. ... Kim and I drove about an hour last night to take in a high school game featuring some kids we know, spending the time on the road catching up after a long work week. The games we saw are part of our boys and girls roundups.

• Seahawks: Interesting scheduling by the NFL, which had the Hawks playing their divisional rivals on the road early in the season. Now those teams head to Seattle, starting today with Arizona. How much have the Hawks – and rookie quarterback Russell Wilson – grown since the early season? I guess we'll find out.

• Mariners: The Jason Bay signing is now official. Here's hoping the former NIC and Gonzaga star rediscovers his stroke in the Northwest.

• That's it for today. I hope I didn't ruin your day straying so far from the sporting life today. It was important to me. So I thank you for your patience. By the way, I guess it goes without saying I passed the test. Until later ...