Sometimes the days just fly by. Not the ones in late winter when baseball season is just around the corner and the snow stands as high as Barry Bonds' head. No, those drag along. But around this time of year, when so much has to be done by certain dates, the days seem to disappear as quickly as Marshawn Lynch against the Buffalo defense. Read on.

• It's hard to believe it's less than a week until Christmas. That's not something to celebrate in our house, though the big Christmas shopping is done and only the stocking stuffers remain (and if you are reading this to those in your household that still believe in Santa Claus, I apologize; not for ruining the Christmas mystery but for having readers that would force this onto unsuspecting children). No, we enjoy the Christmas spirit. Enjoy how people are nicer to you. How there are more smiles. And how the nights are filled with basketball games. Last night, after a stint on the radio, Kim and I sat down for a nice dinner in the bar of one of our favorite local restaurants. We have a couple of favorite seats. They are our favorites because they allow us to watch both TV sets. On one was the Stanford/North Carolina State game. On the other was the Baylor/Tennessee women's game. Kim faced the latter, I had a view of the former. We had a great dinner – if you must know, we split a exotic salad (by that I mean it had such things as peppers and cashews in it) and a small pizza – and interspersed talk about our days with glances at the games. It was a perfect way to spend the evening. There is just something so relaxing about watching basketball – when you don't have a team involved. I know how stressful a fan can get when their Zags or Eagles or Cougars or Pirates or Vandals or whatever are battling for a win. Every miscue, every clanged free throw, every missed call – especially every missed call – can cause the bile to rise and the stomach to roil. But that's the price you pay for rooting. People think the tickets, parking and concessions are expensive, but no one has ever calculated the cost of heartburn and headaches caused by fan addiction. That's why last night was so enjoyable. A nice meal without a side order of cheering-itis. And when we left, three people wished us a Merry Christmas or Happy Holidays. I love this time of year.

• One other note. Washington State quarterback Jeff Tuel announced yesterday he's giving up his fight for a fifth year of eligibility and will put his name into the NFL draft pool. I can remember Tuel's first day on campus, not when he was a tall, thin freshman, but even before. When he came up for his visit the spring prior to his freshman year. He had already signed his letter of intent – offensive coordinator Todd Sturdy was so pleased, believing he had found the perfect guy to lead his offense – and was in Pullman with his mom and dad to see his future home. It was the first of many times I would speak with Jeff's mom and dad. If you are wondering how Jeff was able to battle through injuries, to deal with a coaching change, to face all the adversity he did at WSU, and do it without blinking, you don't have to look any further than his parents. Solid people. And that was reflected in their son. He may never have reached the statistical heights Sturdy thought he could at WSU, derailed by a series of injuries that shouldn't be forced on any player, but he gained even more. That wide-eyed innocent that walked around the practice field grew into a world-wise adult who leaves Pullman knowing there is nothing life can throw at him that he hasn't overcome before. After all, when you suffer through more than 100 sacks in college (the exact number is 119), driven to the turf by guys who outweigh you by more than 100 pounds at times, dealing with a mortgage or a pointy-haired boss should be a breeze. For more on Tuel's announcement, I recommend Brian Floyd's goodbye and Bud Wither's piece.

• Washington State: The Cougars play basketball again in a couple of days – in Seattle – and Ken Bone sat down yesterday to talk about it. Christian Caple has a blog post on the press conference along with a blog post and a story on Tuel's decision. He also has his usual morning post and will hold a live chat today. ... The WSU women were blown out last night in Louisville.

• Gonzaga: The Zags will play their final game before the Christmas break tonight when they host the Fighting Camels of Campbell College. Jim Meehan has a short advance. ... BYU took a breather by routing Eastern New Mexico last night. ... USF lost at home to Holy Cross and was called out by the head coach.

• EWU: The Eagles are reaching into their successful pass for a volleyball coach, bringing Wade Benson (pictured) back from Florida to take over the program again. Jim Meehan has the story.

• Idaho: The Vandals football coach staff is almost complete, with UI reportedly hiring its offensive coordinator yesterday. ... Though the Vandals and Utah State won't be in the same football conference next season, we still must mention the Aggies are losing one of the best coaches in their history, as Gary Andersen is headed to Wisconsin.

• Whitworth: The Pirates' Southern California swing continued Tuesday night with another win, though Chapman made it close. Full disclosure: I once served a short stint as Chapman's sports information director.

• CCS: Chris Derrick's women's notebook leads this week with a look at a player with basketball in her blood.

• Chiefs: Spokane's last game before the break had to be against the WHL's best team. And the Chiefs fell to the Portland Winterhawks, though it was much closer than their last meeting. Chris Derrick has the story and a blog post. ... Tri-City had little trouble with Seattle.

• Preps: Greg Lee was in the Lake City to cover the Timberwolves win over archrival Coeur d'Alene. ... Mike Vlahovich was at G-Prep's one-point victory over Ferris in GSL action. ... We also have boys and girls roundups from around the area. 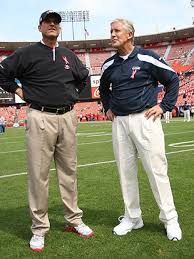 • Seahawks: The disdain the 49ers' Jim Harbaugh and Pete Carroll have for each other seems to be waning a bit, though not in the media. Why give up on such a good story? It will stay white-hot here. ... Since the Hawks have allowed Russell Wilson more freedom in the offense, the rookie has taken off. His recent performances may earn him a big award, though probably not. ... A win Sunday night clinches at least a wild-card spot for the Hawks, a spot that might be just the ticket during the playoffs. ... There is some roster housekeeping most every week.

• Mariners: The Mariners have a bunch of prospects. It's too bad this offseason, prospects aren't valued as much as they were a few years ago. Ya, just the M's luck.

• Sounders: The Sounders will open the MLS season at home once again, facing Montreal on March 2. ... Osvaldo Alonso is in England training in the world's best league.

• That's it for this morning. I only have a few more days to wish you a Merry Christmas, so I'll take the opportunity now. Until later ...