Kind of fun, wasn't it? A Sunday night game that live up to its hype – if you are a Seahawks fan. I am assuming most of you are, so I'm also assuming you had a great time yelling at the TV last night. Read on.

• My guess is a lot of you got up this morning and thought, "so that's what rooting for a winner feels like." Football can be a fun game to watch when your team rams the ball down the other team's throat on its first possession, does it again, blocks a short field goal and returns it for another score (pictured), and then continues to grind the opponent into the rain-soaked turf. Even a terrible flag (more on that in a bit) can't ruin it, especially when it is followed by the aforementioned field-goal block. The Hawks' 42-13 beatdown of the 49ers had most Seattle fans hoping for a final touchdown and a two-point conversion, just for another 50-point total and a "what's your deal" meeting at midfield after the game. That didn't happen, but every other hope was realized Sunday night. The Hawks won, keeping their hopes for an NFC West title alive, though they depend on the Arizona Cardinals winning in San Francisco next week (ya, right). Seattle clinched a playoff berth. The offense showed its as good as there is in the NFL right now and the defense was once again more than solid. If the momentum continues for the next month, the Hawks may not win the brass ring but someone is going to have to play a great game to knock them from the playoffs, no matter where the game is. ... A quick aside about the incorrect personal foul called on Kam Chancellor when he leveled tight end Vernon Davis (pictured). Though replays showed Chancellor led with his shoulder, did not use his head as a weapon and hit Davis in the sternum, not the head, he was still called for a foul. If you didn't feel the call was warranted, you should follow Fox referee guru Mike Pereira on Twitter. He agreed with you. It was a bad call. But he also explained why the officials had to call it, even quoting the rulebook. Basically, when in doubt about a play concerning safety, NFL officials are instructed to throw the flag. Anything that looks even a little like a violent foul will draw a flag. Chancellor's hit seemed, in real time, like it could have been helmet-on-helmet or some other form of illegal contact. That's enough in today's NFL to earn a penalty. 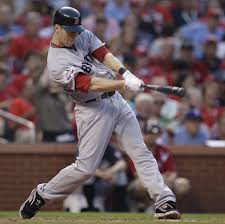 • One other thing. I guess I wasn't clear enough yesterday in my criticism of the Mariners. My bad. There was a comment concerning my support last offseason of the M's signing Johnny Damon, basically saying I have to be consistent. I couldn't support signing one over-the-hill guy and not another. I think I have been consistent. I still think signing Damon last year would have been a good move, bringing a veteran presence into a clubhouse devoid of them. Instead the M's signed Kevin Millwood and, though not a hitter (something they needed badly), he did fill a role on and off the field. Fine. And I thought signing Jason Bay (pictured) this season was a fine idea as well, and said so here. He's cheap, he understands what it takes to be successful at the major league level and he may just recapture his former abilities – or, at the least, some semblance of them. One of those guys is fine. But other than the trade for Kendrys Morales – where I must remind you the M's gave up their second-best starting pitcher for the Angels' fourth- or fifth-best hitter – that's all the M's have done this offseason, sign guys whose best attribute right now is hope. Besides Bay, they have inked Jeremy Bonderman (a guy who hasn't pitched in the bigs for a couple years) and now Raul Ibanez, who just happens to be older than some major league coaches. The big splashes have been provided by project guys or players on the far side of their careers. That's not enough. They aren't willing to spend any real money (see this Geoff Baker piece on the Josh Hamilton discussions), despite saying they are. Really, all that's left out there in the free agent market is Michael Bourn, who wants way too much money for his abilities. My guess is the M's will try to make a trade, moving one of their younger designated hitter/first basemen types for a bottom-of-the-rotation pitcher or another prospect. And that will be it for this hot stove league. Would that be enough for you?

• Washington State: There's not a lot of activity in Pullman, unless you count the destruction of a pedestrian bridge on campus (Nevada Street over Stadium Way, the demolition of which is pictured at right). But Christian Caple does have a morning post with links.

• Gonzaga: The Zags aren't in action, but Portland, St. Mary's and USF played yesterday. The Pilots won in Las Vegas, the Gaels lost a game at Northern Iowa that was postponed a day and USF lost in Hawaii.

• Seahawks: Not a lot of you voted for a Seahawk rout in our poll yesterday, but those of you who did deserve some applause. Getting something right is a rare thing on this blog. One thing we do get right (if I can pat myself on the back) is give you links to coverage of big games like this. We read through everything we could find in Seattle, including a couple of columns and even a blog post or two. Then we found a few stories from the Bay Area that cover the same game from a different angle. Read them all and you'll be able to talk intelligently about what happened. Or, like me, at least be able to fake it.

• Mariners: The M's have told Ibanez he could play a bunch of spots next season. Notice how many guys in the accompanying graphic play the same spots.

• Sounders: Yes, there are still MLS awards to hand out. And the Sounders have a couple of nominees.

• Not too long now until the jolly fat man comes down the chimney. I hope I don't get stuck this year. Way too many candy canes the past week. Until later ...