You know what is just around the corner? The Olympics, that's what. And the British Open. And, if you peak just a bit farther down the street, you can see the start of college football. But right now, on this block, there is a little less to excite the imagination. A few things but nothing like the Olympics, or a golf major or college football. Read on. 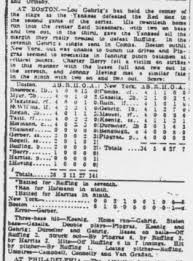 • The summer sports section has its own rhythm, a rhythm different than any other time of year. It's slower than other times, with a sameness that mirrors the weather. But just as the days are consistently warm during the season, the summer sports section has one unifying element: the major league box scores. You don't have to be a rotisserie player or a math major to enjoy the beauty of a box score (I was one of those things once and I'm pretty sure you can easily figure out which one), an element of the timeless game that's been updated and modified since I was young but is still remarkably similar to days of yore. I thought it might be fun this morning to take a look at the M's box score from yesterday's 4-0 loss to Texas. ... The first thing that stands out to me are the Rangers' batting averages. They had eight guys in Sunday's lineup that finished the day hitting better than .262, with three guys over .300. Quickly glancing down to the M's lineup, I see they had one player in their order hitting better than .262 (Casper Wells at .264). In fact, the Mariners had four hitters under .200, including the leadoff hitter (Brendan Ryan on this day, not Dustin Ackley), a middle of the order guy (Justin Smoak) and two fellows at the bottom (Miguel Olivo and Chone Figgins). Doesn't seem quite fair, does it? ... The next aspect of the box that seems out of whack is the number of hits and runs. Texas had eight hits (including an Ian Kinsler solo home run and three Adrian Beltre singles) it parlayed into four runs. Seattle had five hits that resulted in no runs. The Rangers strung together three of those hits in the third, with Beltre (pictured in Mariners section below) coming through with a two-RBI single, proving once again it's not just the number of hits that count, but the timing. ... The rest of the box is typical, with the pitching lines of the Rangers' Matt Harrison (nine innings, four walks, three strikeouts, zero runs) and the M's relievers (four innings, no walks, five strikeouts, zero runs) impressive. But there are two little notes at the bottom that exemplifies the enigma that is Miguel Olivio behind the plate. The Rangers tried to steal just once, and Olivio gunned down Craig Gentry. Good. But just below that note is the news Olivio had another passed ball. Though the box score doesn't relay the news (it should), it was his seventh in just 46 games. Way too many, but about what we've come to expect from the Mariners' catchers since Dan Wilson retired. Just another position the organization has been unable to fill adequately since the heydays of the early 2000s. That opinion isn't contained in the box score, of course, but it is easy to infer from reading those little nuggets of information every day.

• Washington State: Athlon Sports wants to know the answer to one question: Can Mike Leach take WSU to a bowl this year? ... The Pac-12 football media day is next week in Los Angeles and Ted Miller at ESPN.com is getting a jump on the festivities. He has a primer. ... BYU will have a 23-year-old defensive lineman waiting for WSU, a guy three years removed from his last college football game. ... Utah has one goal in football: to compete in the Pac-12. Everything else is secondary. ... Bud Withers has an idea to use Joe Paterno's statue as a learning tool. ... Former UCLA player Reeves Nelson is trying to realize his NBA dream.

• Indians: Spokane's losing streak reached historic proportions Sunday night when the Indians lost their 10th consecutive game. And Jess Brown tells us it could get worse before it gets better. ... The loss, 8-2 to Eugene, was also the Emeralds' sixth consecutive win.

• Mariners: There is a sameness to this season, as Ryan Divish captures in his game story from the Mariners' 4-0 loss to Texas on Sunday. There is the usual lack of offense, the ever-present praise of the opponents starting pitcher, the typical decent M's pitching, the easy-to-predict postgame comments from Eric Wedge and the standard notes of frustration from the players. ... Jack Zduriencik made some comments about Ichiro that could have been interpreted as saying the rightfielder will return next season. He explained those comments to Larry Stone.

• Sounders: Ties are better than defeats, of course, and the Sounders picked up the one point Sunday with a 2-2 road tie with the New York Red Bulls. But a win once in a while might be really nice, at least to coach Sigi Schmid. ... A couple of deserving Sounders are added to the MLS all-star team. ... Chelsea comes to Seattle this week for a friendly.

• Golf: The Rosauers Open had its usual great finish Sunday and Jim Meehan caught all the action. David Phay (right, sizing up the winning putt) birdied the 18th hole at Indian Canyon to hold of Corey Prugh and win the $11,000 first prize.

• That's it for this morning. We'll be back with more tomorrow, like usual. Until then ...