It looks like a good day to stay indoors. Cold, wind, rain. The type of day sitting down in front of your computer or smart phone and reading a bunch of sports stories is just the ticket. We'll do our best to supply the content, you just have to supply the time. Read on.

• So what do you want to read about? College football? Sorry, that's not one of our subjects today. The Seahawks? Can't help you there. The local prep scene? Not a bunch of items to pass along in that regard. If your next question is some variation of "what good are you," we have an answer to that. We can offer you pretty much a full day's worth of Mariners coverage and a bunch of Pac-12 information, from money figures to baseball advances. But if those subjects don't interest you, my suggestion is to go outside and let the rain cascade over you. Your head needs a good soaking. 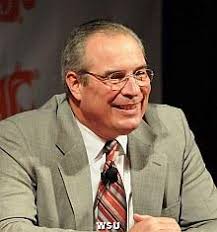 • Washington State: When Bill Moos (left) retires as WSU's athletic director, he's not going to look at the Martin Stadium expansion or a new football facility or a revamped soccer stadium as his most enduring legacy. At least he shouldn't. His most enduring legacy will be the Pac-12 sharing its media money equally. That was Moos' No. 1 priority when he returned to his alma mater as AD, it was the element he fought hardest to make a reality and it's what he should be most proud of. Without equal revenue sharing, none of the buildings going up on campus would have been remotely possible. Want proof? Read Jon Wilner's most recent blog post on the San Jose Mercury News site. He details the financial outlay each school received from the conference last year. Guess what? WSU, in the final year of the old contract, received less than anyone else, about half of what Stanford earned from the conference. If that had continued, the Cougars would never have survived in the new Pac-12. ... What will be Washington State's strongest position group in 2012? If you said anything but receiver, you probably haven't been paying a lot of attention. That's also the consensus of ESPN.com's Pac-12 blog. ... The Cougars will send eight athletes to the NCAA track and field championships. ... Three of the four Pac-12 schools that hosted – and won – regionals last weekend will host Super Regionals this weekend. Oregon will welcome in Kent State, Arizona will face St. John's and second-ranked UCLA will have TCU come to town. All three should be considered heavy favorites to make it to Omaha. Only Stanford will travel, going across the country to Florida State for the best-of-three Super Regional. ... Speaking of the Cardinal, pitcher Mark Appel was expected to be the first starting pitcher taken in Monday's major league baseball draft. Instead, he fell to seventh (taken by the Pirates) and turned out to not even be the first Bay Area starting pitcher selected. That honor went to USF's Kyle Zimmer, taken fifth by the Kansas City Royals.

• Preps: There is one bylined story in today's S-R written by a staffer and it is this one from Greg Lee. Greg covered the annual Jack Blair all-star girls basketball game last night at University High, one by the Metro team 80-79. The final margin was supplied by a Brooke Gallaway (left) free throw.

• Mariners: What was bigger yesterday? The Mariners going into Anaheim and defeating the Angels 8-6 behind another Cy Young stepping-stone performance from Jason Vargas or the selection of Florida catcher Mike Zunino in the first round of the draft? In the present, the former, with Munenori Kawasaki supplying the offensive boost (yes, I wrote Munenori Kawasaki) and Vargas pitching well enough to turn the game over to Tom Wilhelmsen and the bullpen. But for the future, Zunino's selection may have ramifications throughout the organization if he turns out to be the catcher the M's believe he can be. Heck, the selection already has had an effect on Jesus Montero. ... Justin Smoak was named the American League's player of the week. ... Kyle Seager's brother Corey was drafted by the Dodgers. ... Felix Hernandez's next start will be delayed due to his back issues. Instead, Hector Noesi will start Wednesday on short rest.

• Sounders: As we said yesterday, coach Sigi Schmid's comments about the U.S. Open Cup draw should draw some sort of reaction and they did. ... The Sounders' opponent tonight, Cal FC, isn't your typical amateur football club (or as Schmid said, they aren't a pub team) and features a well-known coach.

• I hope that's enough to get you through the rainy day here in the Inland Northwest. If it's sunny and warm where you are, I have two words for you: Enjoy it. (I wanted to write something else, as I'm extremely jealous, but also wanted to keep my paychecks coming.)Until later ...