First the Miami Heat roared back in the second half and defeated the Boston Celtics, sending the two teams everyone expected – Miami and Oklahoma City – into the NBA finals. Then later in the evening in Las Vegas, Timothy Bradley won a controversial split decision over the current star of boxing, Manny Pacquiao. And the Twitterverse exploded. Fix. Crooked. Conspiracy. Read on.

• We had a conversation the other day on the radio about conspiracies in sports and whether you believe they exist. Sometimes I am certain of it, other times I'm not so sure. The certain part of me comes from being a fan. The biggest example of that was the Super Bowl with the Seahawks. All week leading up to the game the national pundits kept dwelling on Jerome Bettis' upcoming retirement, how much he meant to the NFL and how great it would be if he went out with a victory. Then the officials made it happen. Now it very well could have been incompetence. Sure. Heck, the ref even admitted about 100 weeks later he missed a call or two. OK. But he wasn't the guy who called the early PI in the end zone, giving the Stealers all the momentum, was he? So, as a fan, I still believe that game was hinky. But the not-so-sure part comes from being a reporter for all these years. People love to talk, even when they shouldn't. And a successful conspiracy takes a lot of people. It's hard for me to believe any big conspiracy could stay hidden forever. Some day someone would talk. So last night when Miami punched its ticket to the finals, I didn't buy into the conspiracy blather on the Internet. Even though it has been proven in the past some NBA games have been manipulated by an official – Tim Donaghy – and that same official alleged he was not the only one using his whistle to affect an outcome. And when Bradley's name was called as the winner in Vegas, I didn't jump on the conspiracy bandwagon even though the upset means there will be a rematch – lots of money there – and boxing has been notoriously crooked in the past – thanks to the money to be made. No one would try to fix a fight, would they? Then it hit me. Of course it could happen. Did it? Who knows. But I'm sure of one thing. There are people out there that believed the Heat and Thunder were preordained and that Pacquiao's dominating win last night was stolen. The only thing I have to say for those people is, get over it. It's not important. Not like losing a Super Bowl.

• Earlier this week we wrote a little about our childhood love of the Dodgers in the run up to LA coming to Seattle to play the Mariners. Well, Seattle Times baseball reporter Larry Stone – known around the world as the guy who misses no-hitters – went a bit deeper into his childhood fascination with all things Dodger blue in today's paper. One thing Stone did was list his five favorite Dodgers from his childhood. His list and my list vary markedly, probably as much as his hometown, Whittier, varies from mine, Sierra Madre. His top five: Sandy Koufax (my No. 1 as well), Willie Davis (not on my list but the favorite all-time player of local Spokane freelance reporter), Wes Parker (my mother-in-law's all-time favorite), Don Drysdale (on my list) and Manny Mota (fifth on my top five too). A good list, but mine varies a bit. Here it is: 1. Koufax. No one else belongs on the top as far as I'm concerned. 2. Billy Russell. A light-hitting middle infielder who did whatever it took to get on base and win games. Sort of my resume as a youth before my (lack of) speed forced a move to catcher. 3. Joe Moeller. A little-used spot starter? The reason is simple. One season Union Oil (if my memory serves) gave away packs of Dodger pictures with a fill up. My dad brought home about 10 packs and Joe Moeller's picture was in each one. No one wanted to trade anyone for Joe Moeller (pictured above), so I kept them all. And started rooting for him. After all, if Joe Moeller hit it big, I could trade the photos. 4. Drysdale. One reason and one reason only: He actually liked to pitch inside and occasionally one "got away." Ask Frank Robinson. He taught me the outside six inches of the plate has to belong to the pitcher, so a hitter that stands to close is fair game. 5. Mota. There was one year in the early 1970s that every time Mota pinch-hit he got one. Not really, of course, but it seemed like it.

• Washington State: Two Pac-12 teams have already earned their trip to Omaha, with Arizona getting past St. John's for the second consecutive day and UCLA shutting down TCU again. Oregon opened Super Regional play by kicking the ball around and losing to Kent State. The rain kept Stanford's dream alive by postponing the Cardinal's second game with Florida State. Stanford trails 1-0.

• Gonzaga: The S-R's weekly achievements column leads with a note about a minor change in the athletic administration.

• Shock: The first half was a nightmare of stupid penalties and blown plays for Spokane. The second half was near-perfect football. The result was a 70-46 victory over the Kansas City Command. Former WSU receiver Jeffrey Solomon caught two touchdown passes in his first game with the Shock. Jess Brown has the story. ... Next week's opponent, Utah, destroyed Chicago, 68-28 in Salt Lake City.

• Mariners: The Dodgers were no-hit on Friday by half the Mariners' pitching staff. On Saturday, against Jason Vargas (the eventual American League Cy Young winner, I tell you) and four M's relievers, they pound out 14 hits in an 8-3 win. ... Felix Hernandez wants a no-hitter. ... Kevin Millwood seems OK. ... Besides his Dodger memories, Larry Stone offers his power rankings, his awards and some news on Jamie Moyer. 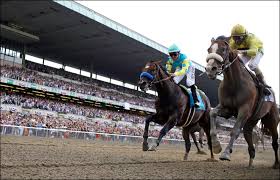 • Horse racing: Without I'll Have Another trying for the Triple Crown, the Belmont lost a lot of its luster. But no excitement. Trainer Bob Baffert performed his version of Alydar, with another of his horses finishing second to Union Rags.

• NBA: The venom being spewed in the Northwest toward Oklahoma City seems a bit misplaced, according to John Blanchette's column this morning in the S-R. However, the venom spewed by Oklahoma's residents toward Mr. Blanchette early in the century when he skewered their state prior to the Rose Bowl might have been appropriate.

• We're sorry this is so late today. It was a combination of sleeping in a bit, having to do a lot of Internet research to make sure my memories weren't flawed too badly and a couple of other things. But the post is up now, so enjoy. Until later ...