Sometimes the only difference between a dream and a nightmare is the inability to catch a routine fly ball. Read on.

• That was the case last evening, when the Oregon Ducks' dream of a college World Series trip was derailed in the bottom of the ninth inning by a nightmarish popup to left field. With the Ducks and Kent State tied at 2, Golden Flash shortstop Jimmy Rider (those last five words have such a Chip Hilton feel to them) was fooled on a pitch, popped it toward left and threw his bat down in disgust. With Derek Toadvine on second and just one out, Rider, the Mid-American Conference's all-time hits leader, was disgusted he didn't get the job done. But he had. Left-fielder Brett Thomas couldn't find the ball in the gloaming and shortstop J.J. Altobelli couldn't make it all the way to left field quick enough, missing the popup despite a full-on dive. When the ball hit the grass just inside the line and bounced onto Altobelli's back, Toadvine was almost to third and the Golden Flashes were on their way to Omaha for the first time. The ensuing celebration  (above) in the infield illustrated once again why college sports are so much fun to play – and watch. The emotional level of 18-to-24-year-old athletes and the corresponding attachment of any-age fans are hard to duplicate.

• Washington State: Believe it or not, it's a good day for news out of the Pac-12, Oregon's heartbreaking loss be darned. ... We start off with this piece from ESPN.com on Michigan looking for a Pac-12 school for its football schedule even though the Big Ten/Pac-12 football challenge isn't scheduled to start for five years. Even though WSU has Wisconsin scheduled for 2014 and 2015, don't be surprised if the Cougars somehow work out a deal to be on the Wolverines schedule in 2015 and 2016. ... Speaking of schedules, Ted Miller is finished with his vacation and examines the misses on the conference football schedules this fall. ... Miller also has a look at the returning starters, the leading tacklers and how the conference is faring in the ongoing playoff negotiations. ... WSU's first opponent in the fall, BYU, is happy with its offseason conditioning. Though it's hard to believe any coach would blast his team's work ethic in print this time of year.

• Gonzaga: Was playing golf yesterday with Jim Meehan – "How did it go," you might ask? "Don’t ask," I might answer – when he found out about Gerard Coleman (right) transferring to Gonzaga. Coleman, an athletic wing who played his first two years at Providence, will sit out the 2012-13 season and be eligible the year after. Jim has a story in today's S-R and had a blog post last night. There is also more from CBSSports.com, ESPN. com and the Boston Herald (link has been fixed).

• Indians: The Texas Rangers have announced the 29 ballplayers who will start the season in Spokane this weekend.

• Preps: It's basically summer, so we have Greg Lee's weekly youth notebook to pass along.

• Mariners: The M's had a day off Monday (the slackers) so there are no game stories to pass along. However, there is the on-going conversation about the starting pitching, the bullpen change, Dustin Ackley's batting average and the first pick in the recent draft. In other words, enough words to keep you occupied today.

• Seahawks: Seattle is taking a flyer on a veteran wide receiver who hasn't been on the field in a couple years.

• Sounders: After four days off, Seattle returned to the practice field Monday and had some visitors. 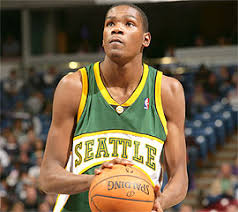 • NBA: The finals begin this evening with the loved-to-hate Miami Heat playing the loved-everywhere-but-the-Northwest Oklahoma City Thunder. My money is on the Heat though my heart is with the Sonics. If Kevin Durant (right) and company bring home the title, I would be tempted to sneak into Key Arena and hang a homemade championship banner. ... Seattle mayor Mike McGinn made a haj to New York yesterday and, to mix religious metaphors, kissed David Stern's ring.

• NHL: One quick note about the end of hockey season. The Los Angeles Kings have won the Stanley Cup. Never in my wildest dreams or even my mildest nightmares did I believe I would ever type that sentence.

• We're headed into the radio studios this afternoon, back willing and the river don't rise, for a couple of hours with Keith Osso and Rick Lukens. You can listen here if you like. Until then ...