It's Father's Day. So, like any good father, it's time to hand out a chore. See, I want to know your favorite sports-related memory of your father. Whether it was taking you to a game or hitting you fungos or walking Bloomsday, I would love to share in them. To get you started, I'll tell you mine. When you're done with the post, pass along your favorite sports moment with your dad in the comments section. We'll all enjoy them. Read on. 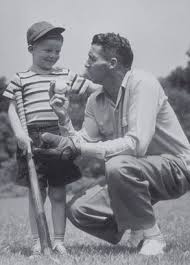 • When I tried to figure out which of the many sports memories I have of my father, so many came to mind it seemed impossible to pick just one. Was it the time we went fishing in the mountains around Lone Pine? Fishing was a passion of his, but not one I shared. We ended up with him tramping up and down the creek and me sitting on the bank, my pole stuck in the mud next to me, the baited hook unattended while I read a book. Fun times. Or was it the day when I was 13 and he and I got into a shouting match in the dugout during a Babe Ruth game, the first time I can remember ever standing up to him? Or was it the time he took me to Anaheim Stadium in 1968 to watch Denny McLain win his 29th game of the year for the Tigers, all the while my dad telling me McLain would win 30 games that year (he did) and no one would ever do it again (they haven't). But as I quickly perused a catalogue of memories covering so many decades, I finally found what I had been looking for from the start. It occurred during my Little League days when I wasn't all that good of a baseball player. Loved the game but not the result. Too small, too slow, too weak. All my friends seemed so much better than me and, as kids like to do, they made sure I knew it. One especially awful day we were driving home from a game. I can't remember much of what happened earlier but I do know I had played poorly, so poorly in fact I wanted to cry (and I just might have been doing that in the car, though I think I've repressed that part of the memory). What I do remember is what my dad did. He pulled the car over on our street a couple houses down from us, put it in park and turned off the engine. My dad was one of those WWII Navy vets, a Depression kid, Italian to the core. Crying, or even sniffling, wasn't what a boy did and wasn't tolerated. When we pulled over, I was sure I was about to be given something to cry about. I was, but it took about 45 years before I did. See, my dad asked me a question. "Do I know baseball," he asked, looking at me. "Yes," I answered, wondering if it was a loaded question. It wasn't. "OK, so believe me when I tell you this," he continued. "Rex, Ted, Darryl, all those guys, you are going to be better than all of them. They are stars now, but you're the one who's going to grow and by the time you get to high school you'll be better than them. And no one will remember how good they were in Little League." He went on to say I had the best hands of any kid he had ever coached, I was smart and a couple of other things. But by then what he was saying wasn't all that important (and like a lot of times when my dad talked, I was lost in my own train of thought). What was important was my dad, the guy who yelled at me just about every time I did something on the baseball field, believed in me. He thought, no, he knew, I was going to be good. I was going to play the game I loved for a long time. That's what mattered. If he thought so, it was going to happen. When he was done talking and my eyes had dried, he started the engine and turned to me one more time. "If you ever tell anyone what I said," he said, "I'm going to whack you." And that is my favorite sports-related memory of my dad.

• Washington State: Not a lot out of Pullman but our achievements column leads with a hire this week in the baseball program. ... UCLA and Arizona will face off today in the college World Series. There is a good chance one of the two will end up in the championship series. ... The Pac-12 Network is almost good to go. ... As the 40-year anniversary nears, Title IX has changed the landscape of college sports. The Seattle Times looks at how it affected Washington State and Washington while the Oregonian also looks back. ... Like WSU and other places, Utah is actively recruiting Polynesia.

• Shock: An 11-point lead with 40 seconds to go. In the bag, right? Not in the Arena Football League, not with the officiating the league puts on the field. The Shock blew the aforementioned lead and coach Andy Olson blasted the officiating afterward, basically saying to calls – or non-calls – cost his team the game – and more than likely a playoff berth. Jim Meehan has the story and a blog post. ... You can also listen to Olson's post-game comments here. ... And the Blaze side of the story of their 58-55 victory in the Salt Lake Tribune.

• Indians: Two games into the Northwest League season, the Spokane Indians are 0-2. At least Saturday they scored a few runs. Jess Brown has the story.

• Mariners: The big story Saturday night in Seattle was the return of prodigal son Tim Lincecum. The two-time Cy Young-winning right-hander, who once threw for UW, has struggled this season though nothing illustrated his problems than giving up five runs in five-plus innings to the offensive challenged Mariners during Seattle's 7-4 win. ... The M's recalled veteran left-hander Oliver Perez from Tacoma before the game. ... It's Sunday, so Larry Stone has his usual column, team ratings, awards and the like.

• Seahawks: The Hawks are disputing a report defensive end Chris Clemons has cut off negotiations.

• Sounders: Now that was ugly, as in a 4-1 defeat ugly. Not only were the Sounders routed by the expansion Montreal Impact, which is bad enough, but they played the last part of the game down a man thanks to a pretty feeble red card given to Jhon Kennedy Hurtado. The Sounders are 0-3-2 in their last five MLS games.

• Golf: After getting a few things done around the house early yesterday (including a lunch-time barbecue), it was time to settle down and watch golf. The 17-year-old Beau Hossler made the day enjoyable, as did Jim Furyk's solid play. But I took no joy in Tiger Wood's sliding down the leaderboard, though I did predict a 76 from him (he shot a 75). There is no doubt Tiger could shoot a 67 and win today, but it's kind of sad watching a player who once put fear in the heart of his opponents now only eliciting pity from them.