Change is coming to college football. Big change – in more ways than one. There is the change to the postseason, approved for a 2014 start by university presidents. And there is the change due to schools when the television rights to a four-team playoff are worked out. Though calling billions and billions of dollars change is probably a mistake. Read on.

• But is change always a good thing? Is this change a good thing? I think I would be hard-pressed to find anyone out there to say it isn't, even if there are a few folks who see the four-school model as just a steppingstone to what's really needed, a full-blown eight- or 16-team playoff. Still, it's a beginning. (As an aside, how often has Washington State's football coach been quoted in the Associated Press' national story on something this momentous? Just another example of Mike Leach's pull on the national psyche.) But even before the four-team system begins, there are a lot of questions to work out. One that comes immediately to mind for me is simple. With a still-to-be-defined committee using a still-to-be-refined formula picking the four "best" teams to play in the semifinals, how does that differ from the old BCS? Oh ya, there are two more teams. There are other questions to be determined as well, with the place of the non-BCS conference schools in this – will a 12-0 Mountain West school have any chance at all or will it be aced out of title consideration, just like in the BCS? – and the money distribution system seemingly atop the list. Yet the death of the BCS was greeted with high fives and hallelujahs, and not just from the presidents. Most of the media felt the same way, from Yahoo's Dan Wetzel, who wrote a book calling for the BCS' demise, to the LA Times' Chris Dufresne. But all those details also led to Jon Wilner wondering about how the new world will affect the previously announced Big Ten/Pac-12 scheduling alliance and Ted Miller assessing the Pac-12's feelings about the matter. On the surface, the change seems to be a step in the right direction. But just a step.

• Washington State: Other than the football playoffs, which, if it had been in place in the past, would not have affected the Cougars much, there is only a smattering of news. ... Miller looks at the running back situation around the Pac-12 over on ESPN.com. ... The Martin Stadium renovation is moving along, and has been since the last century as WSU's photos show. ... Arizona celebrated its baseball national title in Tucson on Tuesday. ... Finally, no reason to get all worked up over this, because their salaries are not paid by the taxpayers, but once again coaches are the best-paid employees for the state of Washington. Though an argument can be made our priorities are all out of kilter. Discuss among yourselves.

• Indians: The Indians, who started the season 1-8, now have a three-game winning streak after Patrick Cantwell's two-run double helped them to a 3-1 win over Boise. Jess Brown has the coverage.

• Shock (UPDATE): Missed Jim Meehan's weekly Shock notebook when I went through the S-R stories earlier today. Sorry about that. Speaking of playoffs, Spokane is still in that mode, but it won't be easy to make them.

• Mariners: Once again the M's and Oakland combined for just a handful of runs. But this time, thanks to the unlikeliest of heroes, the M's came out on top 3-2. Yep, Chone Fig ... wait, not him. It was Brendan Ryan who drove in Casper Wells (right) with what proved to be the winning run with an eighth-inning single. ... Jesus Montero has been catching for longer than you might think. ... The M's need to have a strong second half to validate management's plans, according to Larry Stone. ... Puget Sound baseball fans may have to make a choice Thursday night.

• Seahawks:  The Times' Danny O'Neil sees an odd set of circumstances coming together, leading to a premature headline. 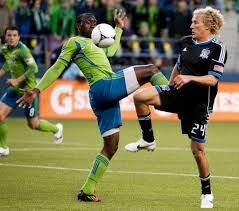 • Sounders: The big news came during the game as the Sounders scored an early goal and held on for a 1-0 victory over host San Jose in a U.S. Open Cup quarterfinal last night. But the really big news may have came afterward, when there was a melee of sorts between the teams and punches may have been thrown.

• NBA: The NBA draft is a really big deal for the young men involved in it. But there is more to life than basketball, as one visitor to Spokane spoke about with Jim Allen yesterday. Check out Jim's story, part of the lead-in to Hoopfest. ... The Seattle arena project has attracted some heavyweight names.

• Another week, another hump day. Yep, it's Wednesday. Remember, after today it is all downhill until Hoopfest this weekend. Until later ...