A lot has changed since Washington State began basketball practice last October. Personally, I was a member of the working class back then, drawing a gigantic paycheck and disdaining such trivial pursuits as buying Mega Millions tickets. Most, if not all, WSU basketball fans had tempered expectations after the early departures of Klay Thompson and DeAngelo Casto, though with Faisal Aden's scoring ability on the outside, the typical Cougar fan was at least looking forward to being able to watch one exciting player. But the postseason? Nah, that wasn't going to happen. So here it is, March 31, and this semi-retired sports writer is still writing about Washington State basketball (and lamenting the lack of a Mega Millions win last night). And yes, WSU did have at least one exciting player this season, though it wasn't Aden and though that exciting player didn't play in the CBI championship series with Pittsburgh. Read on.

• One thing that hasn't changed since Washington State began basketball practice in October? We're still writing about Ryan Leaf, though not in a way he or any Cougar fan would like. We'll pass along the Great Falls Tribune story about Leaf's arrest yesterday and leave the rest of it to Christian Caple's morning blog post. ... But back to basketball because, after all, it was the lead-in to today's post. Is there anyone reading this that doesn't think WSU is better than Pittsburgh, despite the outcome of the three-game CBI championship series? (If you didn't know, the Panthers won 71-65 last night to clinch the title.) By that, I mean the Washington State team that features Brock Motum in the post. That Cougar team is much, much better than the one that competed in the CBI final series without Motum, sidelined with an ankle sprain suffered in its semifinal win at Oregon State. Motum was the revelation this season, the biggest change from the Cougar team that was expected and the one that actually showed up. The junior from Australia led the Pac-12 in scoring and was named not only to the conference's first team, was the Pac-12's most improved player as well. If only he could have been on the court the past week to help the Cougars prove the Pac-12's eighth-best team was better than the Big East's 13th. But his injury, along with some old-fashioned home cooking the last two games in Pittsburgh, did in WSU. (As an aside, after another of a series of, well let's just call them "odd" calls by the officiating crew, the S-R's John Blanchette sent out this tweet: "To help determine the 101st best college team in America, the CBI apparently found the 101st best officiating crew." John is always way too positive. Watching that effort last night, 201st or 202nd would be a better rating for the crew.) Still, despite the flat finish, the CBI run was a nice way for Washington State to end a basketball season that started with less anticipation than usual way back in October.

• If you were wondering, I think Kentucky and Kansas will win today, setting up a NCAA title game that reaks of history. I'm actually rooting for Kansas in its matchup with Ohio State (family reasons), but don't like either Kentucky or Louisville, mainly due to the sleazy nature of the two head coaches (Mr. Vacation vs. Mr. 15 Seconds). Maybe the Wildcats can win at the buzzer today and the NCAA could vacate the victory tomorrow. It would save time down the road, wouldn't it? 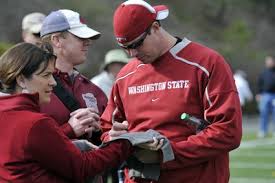 • Washington State: Besides the Leaf news, Christian has links to a lot of Cougar items in his morning post, but more importantly has original content as well, including a video interview with Rahmel Dockery and a post-game blog report. ... Besides the coverage in the S-R this morning, we found a few basketball stories to pass along, including two from Pittsburgh and the Associated Press piece. ... As for Leaf, there is plenty of coverage, with the main piece being this report in the Great Falls Tribune along with the S-R story and this AP piece in the Seattle Times. CougCenter's Brian Floyd also has some thoughts. ... In happier Coug-alum news, former player and coach Malik Roberson was named defensive coordinator at Central Washington. ... And it's Saturday, so we can link Ted Miller's Friday mailbag from ESPN.com. Yahoo. ... And for my favorite piece of the day, because it shows the lack of thought put into think pieces at times, I pass along this Forbes Magazine article on search firms changing college athletics. Mike Leach's hiring by WSU is the lead. One problem. Bill Moos did not use a search firm to hire Leach. He did it himself. Oops.

• Shock: It wasn't pretty in the Arena last night as the Shock suffered their worst defeat ever, losing 69-35 to San Jose before 8,830 and a national television audience – most of whom probably unaware of the final score after leaving or tuning out early. But Jim adds a ray of hope in his game story, passing along the news former quarterback Kyle Rowley may be headed back to Spokane. ... The game was pretty fun for the SaberCats.

• Chiefs: The crucial game five went the Chiefs way last night, as Spokane won 5-1 behind Eric Williams in net. Williams' third consecutive victory, this the first one on the road, gives the Chiefs a 3-2 series edge heading into Sunday's game in Spokane. We have this story and we found this coverage in Vancouver. ... Tri-Cities has lost a big player for the rest of the season. ... The Portland/Kamloops series is set.

• Mariners: There was a lot of back-slapping going on after Ichiro and the Mariners met Oakland in a season-opening series in Japan, but we found someone who wasn't a fan. ... The television broadcast was an exercise. ... Jamie Moyer is going to pitch until he's 60, I'm sure.

• Sounders: Seattle, nursing a few injuries and one player coming off a league-imposed fine for flopping (yep, really), hosts San Jose in an MLS match this evening.

• PGA: No reason to pass this along other than I found this Associated Press story really interesting. Here's hoping the brouhaha will translate into another two years of Masters coverage without commercials.

• By the way, if you listened to our radio show yesterday, you discovered I have a problem. Wait, that didn't come out right. I meant I have a problem with the baggy uniforms Major League baseball players wear. Yep, I have officially become a curmudgeon – and my old man. ... That's our report today. Until later ...