As most of you know, I'm a big Felix Hernandez booster. The guy can pitch, it's as simple as that. But yesterday evening, I found myself quietly rooting for Hernandez to fail. Don't judge me. Read on.

• When I'm on the radio, as I was yesterday, I enjoy playing the contrarian role. It's not only good radio, but it fits my personality (and, after years and years of being one of the few conservatives in a newspaper newsroom, it sort of grows on you). So when we played our "Buy or Sell" game yesterday, I took a less-traveled path. Dennis Patchin's question was easy: Would Felix give up two or fewer runs to the Yankees. Rick Lukens came armed with a bullpen full of stats showing how Felix owned the Yankees, from ERA to won/loss record, so buying that seemed to be the right way to go. But I had a gut feeling. And when your gut is the size of mine, you listen to it. So I sold, taking the over. Out of seven people, I was the only one to bet against the King. As the game progressed, I quietly hoped the Yankees would score three runs. The game wore on. The Yankees scored. Cool. New York had a guy thrown out at home. Dang. Jesus Montero put the Mariners up 2-1. Good for him. The clock ticked. The end of the show was coming on fast. Finally, it was nearly six, the Yanks were threatening and Raul Ibanez was at the plate. My time was up. We signed off and Ibanez launched one. A three-run dong. Yankees 4, M's 2. But karma had bitten me in the butt. No chance to gloat – to anyone but Dennis and Rick of course and I would never do that. And the M's would lose, teaching me a lesson. What it was, I have no idea.

• It was a busy day in the Inland Northwest yesterday, about as busy as it gets this season. The prep playoffs were in full swing, the Shock were at home – pulling out a crucial win against New Orleans – and there was even a night college baseball game at Gonzaga. All in all, not a bad day for local coverage. And we have links to all of it, so let's get to them.

• Washington State: Christian Caple yesterday passed along the news, first reported by Cougfan, that Paul Wulff had been hired by the San Francisco 49ers, something I can confirm after receiving a text late last night from Wulff. Christian also has more news today in his morning post.

• Gonzaga: As we said, the Zags hosted Arizona State in the opener of a key-to-their-NCAA-chances three-game series last night. Unfortunately for GU, the Sun Devils picked up the 4-2 win.

• Eastern Washington: Not a good day in Cheney yesterday, with defensive back Chandler Gayton getting tossed from the team after a confrontation with police. Jim Allen and Meghann Cuniff combined on this story.

• Chiefs: Tonight's game six of the WHL Finals just might be the most important hockey game in recent Portland history. Well, this year at least.

• Shock: Talk about a weird way to win. First the Shock fail on what would have been the game-winning extra point. Then they get the second Terrance Sanders' interception – he also had two kick returns for touchdowns – to propel them to a 68-62 win in overtime. Jim Meehan has the story. ... Though there was no game coverage in the New Orleans paper, we did find this feature from a couple days ago that proved to be prophetic.

• Preps: We are just going to list almost all the spring sports, then link the coverage of them. We start with track, where Greg Lee has this story on the 4A and 3A districts along with a roundup of other action. In softball, Steve Christilaw covered the 4A and 3A district battles. Steve also has this story on the tennis playoffs. Jim Allen chimes in with coverage of the soccer postseason. We also have this baseball roundup. 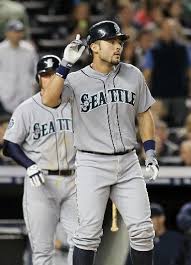 • Mariners: As is often the case in New York, the game itself – a 6-2 Yankee victory – is peripheral to the other story lines. The main one, of course, was the return of Jesus Montero and his importance as a symbol of the Yanks getting fleeced by the Mariners in the off-season trade. Poor Montero did his best to avoid the horde that is the New York media. But there are minor story lines as well, the best of which was former Mariner Ibanez, who is New York's DH because Montero is in Seattle, hitting the game-deciding home run off Hernandez. ... The M's have juggled their starting rotation. ... This just might be the best tweet ever. Brewer closer John Axford left this note in his locker after he blew a streak of 49 consecutive saves in Milwaukee's 8-7, 13-inning win over the Cubs. He had to hightail it to the hospital to help wife Nicole with the birth of their second child. Call Axford the anti-Josh-Beckett and leave it at that.

• Seahawks: The rookies had their first workout under the eyes of the Hawks' coaching staff. Should I say Pete Carroll was excited? Ah, there's no need.

• Sounders: Quite possibly the two best teams in the MLS meet tonight in Seattle.

• Golf: It's Saturday, so Jim Meehan has a golf column.

• Big day in the Grippi household today. After more than 10 days in California visiting her mom (a Mother's Day present for both I presume), Kim returns to Spokane this evening. I'm not saying I slacked off while she was gone, but there are pieces of furniture I can't find due to the mess. I guess I better start cleaning. I might be done by tonight. Until later ...