For quite possibly the first time in my life, today I would rather live in Cleveland. At least there the major league baseball team battles through adversity and has an ownership that will spend a bit of money to help its team compete. Here in the Pacific Northwest, we have trouble saying such things with a straight face. Read on.

• Remember Johnny Damon? Part of the idiots (their term, not mine) that brought Boston its first World Series title in nearly a century? Well, the Cleveland Indians picked him up early this season, bringing a veteran presence that knows a little something about winning into their clubhouse. That hasn't really worked out all that well on the field – Damon is hitting .170 after going 1-for-3 against the M's on Thursday – but just the act of signing a guy with Damon's pedigree means something to the rest of the players. It means the team is committed to winning. What a concept. Wish that attitude were prevalent around here. If you do too, please read Geoff Baker's blog post from last night and, if you have the time, check out Terry Pluto's column in the Cleveland Plain Dealer. One captures what's going on with the M's right now and one is a cautionary tale of what could happen to the franchise in the future.

• Enough on the M's this morning. There was a change in the basketball office at Washington State over the weekend, leaving the Cougars bench staff looking a bit different. Jeff Hironaka, who was an assistant for Ken Bone at Seattle Pacific and took over in the head-coaching chair when Bone left for UW, will no longer fill the position of assistant coach. After three years with Bone in Pullman, he's been moved into the operations post. Which means Hironaka's (with glasses in picture) role will change. Each Division I head coach is allowed three assistant coaches who can recruit off-campus and work with players on a daily basis. The NCAA specifically prohibits the operations guy (or any other non-coaching position on the staff) from doing hands-on work, like showing a big how to defend the high-ball screen or teaching a guard a better way to use his crossover. The role of an operations guy usually revolves around scheduling, class work, travel, that sort of stuff. Basically, the operations of a basketball program. He can also – and this is new in the past couple years – break down film, prepare a scout, put together a game plan, he just can't present it to the players. The ops guys can often be, and in the case of Jerry Krause, who fills the role of at Gonzaga, or Mike Heideman, who filled the role at WSU when Tony Bennett was coach, is an experienced coach who chimes in with advice for the other coaches, helping them do their job better. It's that role that Hironaka will be filling. ... Who will replace Hironaka on the staff? Bone told Christian Caple he wants to improve recruiting and whomever he hires will have connections beyond those currently on the staff (remember, Bone, Hironaka and Curtis Allen all are deeply embedded in the Puget Sound basketball scene), expanding the reach of the recruiting efforts.

• Washington State: Christian also broke the news yesterday Richard Peters, the big man from a Phoenix prep school who committed just before prep school teammate Demarquise Johnson did, will not be able to get eligible and will attend a junior college next season. Peters will have to get his AA degree to play major college basketball, so there is no chance he'll be in Pullman for at least two years. Johnson, a highly sought-after wing, is also still awaiting word whether he's posted a qualifying test score. Christian had that news in this post, the Hironaka news in this post and both together in this story. He also has his usual morning post. ... What is Colorado's most important football game next season? It just might be the WSU contest. ... As an independent, BYU is finding its football schedule has to be flexible. ... The financial numbers at Oregon are a bit misleading, but still interesting nonetheless.

• Gonzaga: The Bulldogs may be meeting West Virginia once again. This time it won't be an NCAA tournament game.

• Whitworth: The second day of the NCAA Division III baseball regionals didn't go as well for the Pirates as the first.

• Chiefs: The Portland Winterhawks got close to the Memorial Cup, but not close enough for their tastes. 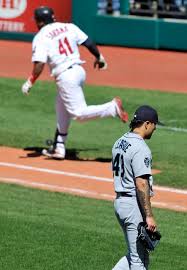 • Shock: Tonight's game with the Philadelphia Soul is crucial to Spokane's future. Jim Meehan has the story.

• Mariners: A 4-0 lead is squandered by the bullpen. So is a 5-4 lead in the 11th. The 6-5 loss to the Indians has everyone connected to the M's a bit on edge. Now it's on to Colorado for interleague play. ... Jesus Montero is more valuable than you might think. ... Miguel Olivo is closer to playing.

• Sounders: The injury-bitten Sounders might have to play a U.S. Open Cup match on the road. But first, there is the MLS game at rival Vancouver tomorrow afternoon.

• Seahawks: The defense is trying to get better, which is a good thing. So are a couple of young players who made a big impression last season.

• It's Friday. The Shock are playing. One plus the other means I'll be on the radio today at 3 p.m. Listen here. You can laugh at me. Until then ...