It is Friday of a holiday weekend. Seven really exciting words, no? With Memorial Day coming up Monday, there is a chance to get out and enjoy all that the Northwest has to offer (if you live outside the area, I'm sorry – in more ways than one). Watch out for the wind today, it may get Mary Poppins bad. If you want to stay inside and read our morning report, we promise not to blow you away. Wait, that didn't come out right. Read on.

• Let's see. Albert Pujols (left) gets off to the worst start of his career. He hits just one home run in his first 111 at-bats. None of those at-bats, however, came against the Seattle Mariners' pitching staff. Now, you could argue that's part of the reason, but I won't. He wasn't hitting and neither were his new Angel teammates. They were so bad, in fact, long-time hitting coach Mickey Hatcher was given the boot a while ago. So thanks major league schedule makers. The Mariners play Oakland seven times, Texas seven times and Detroit six times before they even get to see the Angels – a division rival mind you – for the first time this season? Hey, don't muddy the waters and point out the M's took five of six from the Tigers and five of seven from the A's, I'm on a roll here. I'm in the middle of a how-the-Mariners-always-get-hosed-by-the-schedule-makers rant. Ya, those guys knew the Angels would be awful to start the season, so they made sure they had plenty of time to get the Ray and Dave Davies worked out (that's an obscure 60's rock reference if you didn't know), get all the new players – mainly Pujols and a healthy Kendry Morales – mixed in and get their wings flapping before they met the M's. It's all a conspiracy to keep the Mariners in last place. Dang it.

• Washington State: I thought this would be the first day of the year I didn't have anything WSU-related to link. Nope. Ted Miller comes through on the Pac-12 blog with some thoughts on the conference's most-hated football coach.

• Gonzaga: The University of the Pacific (Pete Carroll's alma mater) will be joining the WCC next season, the last for basketball coach Bob Thomason. Some day I will share a story about the Tigers old arena from back in prehistoric times (pre-1985). It involves a guy juggling bowling balls. Enough said.

• Idaho: San Jose State made it official Thursday. Former Boise State AD Gene Bleymaier will take over in the same role. Not everyone was cheering.

• Whitworth: The Pirates will be opening the NCAA Division III World Series tonight in Appleton, Wisc., playing defending champ Marietta (Ohio). We have an advance, which is cool, and a link (thanks to Whitworth SID Steve Flegel) if you want to watch the game, which us young-at-heart web lovers find even cooler. Start time is somewhere around 5:45 PDT, depending on the schedule from earlier in the day.

• Preps: We had a bit of mistake in yesterday's post (OK, "a bit" is inaccurate as well; we screwed up the start day of the state big school track meets), but we'll make up for it today with a bunch of links if that's all right with you. Of course, we'll start with Greg Lee's coverage of the track meets, leading with Katie Knight's easy win in the girls 3A 3,200 meters (at left). There is also an advance of the smaller school track meets that do start today. ... Jessica Brown has an advance of state tennis.

• Shock: Spokane is in Iowa for a grudge match with the Barnstormers. You might recall it was in the March opener (the date is incorrect in the story we are linking below) when Iowa's John Mohring's vicious late hit knocked quarterback Erik Meyer out of the game – and the season thus far. The Barnstormers went on to win 69-63 in that one. Jim Meehan has an advance of tonight's game and passes along the news with a story and blog post that former coach Rob Keefe has been hired as Utah's defensive coordinator. 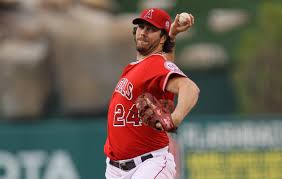 • Mariners: Jason Vargas, who I still contend will win the Cy Young Award, was blasted by Pujols for a two-run dong in the first inning (and a couple other hits), but settled down and threw a solid seven innings. But Dan Haren, helped by the Mariners' young hitters and their inability to make adjustments, was even better in the Angels' 3-0 win. Haren (above) had 14 strikeouts as the M's rarely laid off his slider. ...  With Miguel Olivio back, the M's sent Casper Wells to the minors (I was going to write something about Wells not having a ghost of a chance to stay in the bigs, but refrained). That means Chone Figgins (and his big contract) is still around. But what happens when Franklin Gutierrez returns?

• Seahawks: Carroll is being true to his word. As the Hawks hold their off-season workouts, he's splitting the time between his three quarterbacks, Matt Flynn, Tarvaris Jackson and Russell Wilson. ... They all will like having Kellen Winslow lining up at tight end I reckon.

• Sounders: What's wrong with the Sounders? Part of it could be goaltending as rookie Bryan Meredith is starting to come back to earth in relief of the injured Michael Gspurning. ... Sigi Schmid talks U.S. Open Cup. ... A late report card.

• With the Shock on the road, we have another day of radio play – hopefully we can work in a Kinks reference. The show starts at 3 and ends at 4:30, followed by the Shock pregame. You can listen here. Until later ...