Summer unofficially begins this weekend. Schools not out around here, sure. And it's still cold in the morning at times. But according to lore, Memorial Day Weekend is the kickoff to summer. Fine by me. It's time to get into that summer mode. Shorts every day. Flip-flops instead of shoes. An ice chest ready to be filled – and drained – each day. The barbecue. And baseball on the radio. Read on.

• I enjoy watching baseball on television, sure. High definition has improved that pastime too, making it easier to see how far off the plate Justin Verlander's slider finished before the little box pops up to show you it crossed through the strike zone right on the corner. But when it comes to really enjoying a baseball game, radio is best for me. I like to watch the game in my head while the announcer's voice guides me around the ball park. Maybe it was growing up in Southern California, where you were able to experience the best radio announcer of all time – Vin Scully – and the worst – Jerry Doggett, who we all swore was Walter O'Malley's son in law (that urban legend was not true). Heck, even Jaime Jarrin, the Spanish-language announcer, was fun to listen to, though about the only words I understood were "Garvey" or "Cey." Or maybe radio is in my head because it was really the only option back then, with televised games more of a rarity than an everyday occurrence. Whatever the reason, if the television is not available – last night my wife Kim had commandeered my Laz-E-Boy and was catching up on Survivor, Blue Bloods and whatever else she had fallen behind on – it doesn't bum me out too much. I just head upstairs and "watch" the game on radio. That's where I was last night when Brandon League came in to start the ninth inning. Now I could lie to you and tell you I listened until the end of the game, but that wouldn't be right. Nope, I listened up until Rick Rizzs and Dan Wilson described the Little League bunt play, the one in which League picked up a bad sacrifice bunt and threw it into the left-field corner (the Bob Uecker "Major League" line "Just a bit outside" immediately came to mind). That's Alex Liddi trying to corral League's wayward throw in the picture. Anger isn't the correct word to describe how I felt at that moment. Either would disappointment, frustration or discontent. Maybe if you threw all those words into a blender and came up with a new one that put them all into one neat package, it would fit. I'm sure Vin Scully could articulate it for me, but I can't. Maybe Jaime Jarrin would have said it best: "Soy tan enfadado con los Marineros derecho ahora casi no puedo ver." Let's move on.

• Washington State: Christian Caple is back on the blog this morning with a post. Not to pass along a link to Mike Leach's radio interview yesterday, though that was his stated reason. Nope, he wanted to brag about his hometown, Longview, Wash., a bit. Really, using the SportsLink blog to chat up his youthful memories? That's just unprofessional. ... And if you think I'm being serious, just read the paragraph above. ... Though Washington State's baseball team lost to UW and Oregon State upended conference-leader Oregon, probably the best Pac-12 baseball game of the day was at Stanford's Sunken Diamond (hey, I caught in the bullpen there). The Cal Bears won 5-4 in 18 innings. The game took more than five hours and the winning run was driven in by Tony Renda's base hit. He was 0-for-7 heading into that at-bat. Yep, Chone Figgins' numbers. ... Ted Miller has his Friday staple, his mailbag, on ESPN.com.

• Whitworth: The Pirates first foray into the NCAA Division III World Series in Appleton, Wisc., wasn't a happy one as they lost 13-2 against top-ranked Marietta (Ohio). We watched for a bit on-line, which was fun. Whitworth will face Christopher Newport (Va.) in a loser-out game this morning. You can watch here.

• Preps: The last weekend of prep sports is always chock full and this year is no exception. We start with track, with coverage of the Washington big schools from Greg Lee. Then there is more coverage of the 1A and B meets from Steve Christilaw and Kevin Blocker, respectively. ... From the softball diamond, Jessica Brown has coverage of the 4A tournament in Spokane, while University High is in the semifinals of the 3A tourney in Lacey. West Valley's quest for a 2A title was derailed with a 2-1 loss to Aberdeen. Lakeside and Colville are in the semis of the 1A. ... On the soccer pitch, Cheney got past previously undefeated Archbishop Murphy in a shootout and will play Fife for the 2A title. ... The GSL didn't have a great day at the large school tennis tournament.

• Shock: OK, it's officially a roll now. The Shock have won three consecutive games and five of six after defeating the Iowa Barnstormers, 68-62, on the road last night.

• Mariners: Do you really want me to go over what happened again? OK, I will. Justin Smoak had a big game, driving in four runs as the M's built a 4-0 lead. Blake Beavan was nails, except for one 0-2 pitch to Albert Pujols, who drove it to Kirkland, cutting the lead to 4-3. That's where it stood when Brandon League came in to start the ninth. The M's lost 6-4. I cussed. In English. Did I miss anything? Oh yeah. Dustin Ackley did not play on Dustin Ackley Bobblehead Night. Gaylord Perry was in town – and Walgreens ran out of Vaseline. Weird, huh? 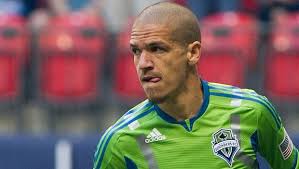 • Sounders: The biggest news from yesterday was Osvaldo Alonso (right) being suspended for two MLS games. ... The Sounders travel to Los Angeles to face Chivas USA needing all their defensive depth, though the road doesn't seem to bother them. ... Want to know what each player earns? Check here.

• Golf: It is summer. Jim Meehan has his weekly golf column and it includes some advice from a few local golf pros.

• MMA: We talked with Michael Chiesa's mom on the radio yesterday – my questions were simple: can she watch he son fight and how many holes are there in her basement walls? – so I was interested in how the Spokane fighter would do in the semifinals of the reality show "The Ultimate Fighter." He won and will fight for the title - and the UFC contract – next week.

• That's it for this Saturday morning. I have some bad news. My favorite doughnut shop is closed for the holiday weekend. Summer does have a downside. Until later ...