Isn't it nice to wake up on a typical Wednesday and be surprised a little? You know what I mean. Maybe you make every light on the way to work. Or you drive through McDonald's and see the Rolo McFlurry is back on the menu (OK, maybe I'm the only one who thinks that's a neat surprise). Or you find a bunch of interesting stories on the web, making your morning pass a bit quicker. We can take care of one of those items for you today, the last one. Read on.

• Our morning started with a surprise from a friend. He emailed a link to a story he thought I might like. And I did. So we're sharing it at the bottom of this column today. But it was also a challenge. On a day in late May, it's hard to find stories outside the realm of baseball. And though any story about yesterday's Mariners' game would contain a bit of a surprise – hey, they scored 10 runs in a game – we needed to roam a bit farther afield if we wanted to meet the challenge. So we did.

• But before we get to the links, we wanted to type a few words about the M's performance last night. There was the typical solid-if-not-spectacular start from future Cy Young-winner Jason Vargas. There was the typical big blow from John Jaso (hey, typical is a relative term). There was the untypical two-run throwing error by Adrian Beltre on Jesus Montero's ground ball, quite possibly the biggest contribution Beltre's made to a Mariners' rally ever. And then there was the top of the eighth, which I missed. When I got out of the car last night, the M's led 4-3 and my figernails were getting worked over. When I got back in a couple hours later, the postgame show was on and they were talking about a 10-3 win. Not what I expected, that's for sure. My expectations were more attuned to a blown save and a 5-4 Rangers' win – based on past occurrences I assure you – that I could use as an excuse to stop at Dairy Queen on the way home. Instead, thanks to a six-run inning, we stopped to celebrate the end of a five-game losing streak. 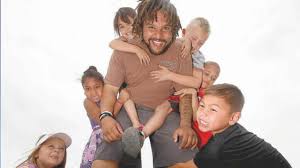 • Washington State: Not all surprises are good ones. Some are downright awful. Former University of Washington – and Spokane Shock – football player Johnie Kirton (left) was found dead in a San Jose hotel room Monday night. Kirton, who played in Spokane in 2009, had just joined the SaberCats. Bob Condotta has a nice obituary in the Times. ... This fall's football schedule is on everyone's radar right now, with CBS.com's Bruce Feldman putting three Pac-12 schools in his top 10 list of toughest schedules and Utah and BYU facing lots of night games this season. ... It's also time to start previewing the fall (really?) with the Arizona Republic's Doug Haller putting together this presentation on the paper's website. ... There are five Pac-12 players on the Rimington Award watch list and though none are Cougars, one of them has a familiar last name. ... Yes, we do have some Washington State news. CBSSports.com talked with Demarquise Johnson's summer coach and he expects Que to be cleared by the NCAA.

• Gonzaga: Marco Gonzales is one of 30 finalists for the Golden Spikes Award. ... The oldest living GU basketball player passed away over the weekend. ... We mentioned the Zags' disappointment with not earning an NCAA at-large berth Monday. Want to know a team that was really surprised? How about 43-12 Utah Valley State?

• Mariners: With a night game in Texas and a five-game losing streak hanging over the team before the first pitch, it's not surprising there was a lot of discussion about Eric Wedge, the Mariners' lineup and roster and the future of the team yesterday. And that was before the 10-3 victory. Afterward, the offensive explosion took center stage and overshadowed another solid performance by Vargas, who might be the M's most consistent performer this season. ... Steve Kelley's column on Wedge and where the blame lies for this season inspired my poll question for the day. ... Will Ichiro remain in the No. 3 spot? Will Brandon League return as the closer soon? ... There was some good-natured fun in the locker room before the game at Dustin Ackley's expense. ... The Rangers may have lost the game, but they also made a winning move yesterday. ... Bruce Jenkins of the San Francisco Chronicle makes a compelling argument (umpires aren't all that good) for more use of instant replay.

• Sounders: The banged-up Sounders open their quest for a fourth consecutive U.S. Open Cup tonight and there might be tickets available. ... Though Seattle doesn't sit atop this power poll, unlike the top-ranked team they are still alive in Cup play.

• NBA: There was a step taken in the Sodo arena process yesterday. Like almost all major projects that involve the government, a panel was put together.

• The story passed along to me this morning by my buddy Kent concerns the future of newspapers, a subject always important to me. I pass it along to you just in case you're interested. Until later ...