There are a lot of coaches in college football who are hard to get along with. Robb Akey was the antithesis to those guys. The larger-than-life Idaho head coach was always upbeat, always positive, always ready with a "Bubba." He was easy to like. But he's also no longer the University of Idaho's head football coach. Read on.

• One of my favorite stories about Akey came from former Washington State defensive coordinator Chris Ball, who was a secondary coach at WSU when Akey was coaching the defensive line. Ball related how then-Cougar defensive coordinator Bill Doba liked to spend the first 10 minutes or so of halftime figuring out new blitzes to throw on the field in the second half. Then, as the team was getting ready to leave the locker room, he would pull Akey aside, tell him what he wanted to do and ask if Akey's d-linemen could pull it off. Akey's answer was always the same. Do whatever you think you have to do. We'll adjust. That was Robb Akey. Throw whatever you wanted at him and he dealt with it. Give him a new blitz, he dealt with it. Give him a bunch of APR problems and hard cases when he took over at Idaho, he dealt with it. Pull the conference out from under him, he dealt with it. But he couldn't deal with it well enough to win consistently and the UI administration decided Sunday not to deal with Akey anymore. They canned one of the good guys in college football. Where the Vandals go from here – literally – is anyone's guess. For now, former WSU quarterback Jason Gesser takes over as head coach, just a couple years removed from his high school gig at Eastside Catholic. But for the long term, it's going to be tough to attract someone with experience to Moscow considering the Vandals' undetermined future. That's why Sunday's decision seems so odd. With the shoals Idaho is trying to navigate by playing as an FBS independent starting next season, putting a new guy at the helm seems counterproductive. It's going to be a rocky journey the next couple years and, from the outside, Sunday's decision won't make it smoother.

• Washington State: Another short practice, another competitive finish for the Cougars. Christian Caple has the skinny on WSU's penalty kick competition that finished practice Sunday in this blog post. He also has a morning post with Pac-12 links. ... The Pac-12 blog at ESPN.com has its weekly power rankings. ... Jon Wilner looks back at the weekend.

• Gonzaga: Jim Meehan takes once last look at the Kraziness in the Kennel. ... The last section of this Oregonian story deals with former Zag Adam Morrison's hopes of making the Blazers' roster.

• EWU: Saturday's opponent, Sacramento State, suffered an even bigger loss Sunday with the death of one of the team's linebackers.

• Idaho: Josh Wright covered the Akey news with this blog post and a story for the S-R this morning, while John Blanchette weighed in with a column.

• Seahawks: At least someone thinks Sidney Rice – other than Sidney Rice, of course – needs to get the ball more. 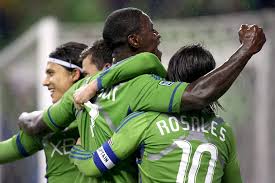 • Sounders: Win one, lose one. The Sounders took care of what they needed to on the field Sunday, topping Dallas at home 3-1 and clinching at least third place in the MLS' Western Conference. But when Vancouver couldn't score against Portland and lost 1-0, the Timbers won the Cascadia Cup, which should keep the Portland team happy while it watches the postseason from the sidelines.

• Mariners: Higher ticket prices must mean a better product on the field, right? Ya, right. ... The A's are doing what they can to get better. Your turn Mariners. ... The darn Giants just won't go away.

• Cycling: OK, we don't go here much, but the UCI stripping Lance Armstrong of his Tour de France titles might just be the final chapter of the Armstrong saga. Though probably not.

• Have a good week. The weather here is starting to feel more and more like late fall, early winter and it's still October. Dang it. Until later ...