Who would have thought? The Seahawks led by three. About five minutes left. The Lions have to go 80 yards to win. A tying field goal from Spokane's Jason Hanson, OK. That could happen. But giving up a touchdown to lose? Against this defense? No way. Well, dang it. Read on.

• Defense is our theme today and we'll start, like the Detroit offense, with the Seahawks. So what's the deal with third down? Twelve times Sunday the Lions converted a third down, five of them needing more than seven yards. So much for "the dominating Seattle defense." Part of the problem was the absence of defensive tackle Jason Jones, who gives the Hawks that push up the middle NFL coordinators prize so much in their nickel package. Without the speed in the middle – Jones was sidelined with an ankle injury – the Hawks put no pressure whatsoever on Matthew Stafford on the final drive. Usually in those situations, Seattle has been able to rush three or four and still get into the quarterback's face. Not Sunday. So of course Pete Carroll's squad made an adjustment and started blitzing? Ah, no. The Hawks spent the final drive playing soft – in both football meanings of that word – and the Lions marched down the field to victory. A victory that left Seattle at 4-4 halfway through the season. Four wins, four losses. Not exactly what most of us had in mind, I think, after the first couple weeks (which is why I put up a quick poll yesterday). Sunday's result plays a part in a thought that's been percolating in my mind for at least the past 12 months. I'm beginning to think maybe pro football isn't exactly Carroll's forte. Talent and emotion wins a lot of college football games. The pro game, in which talent is pretty equal, takes more than emotion to win consistently. It also takes the ability to adjust on the fly, to alter the usually successful scheme just enough to counter the opponents' adjustments. I don't see that consistently from the Hawks. Often Carroll and his team have a befuddled look in key situations. And that doesn't bode well for long-term success. I'm still torn about this, but as time – and losses like Sunday's – goes by, the thought begins to harden.

• Defense is also on our mind when it comes to Washington State. And for the opposite reason. Now no one will confuse the Cougar defense with the Hawks, not by sight and not by statistics. But this WSU defense is getting it done more often than not. And against teams with a lot more talent. When the season began, everyone looked at the players coming back and – rightfully so – expected the Cougar defense to struggle. And it did for a while. But new defensive coordinator Mike Breske and his staff have done a masterful job of overcoming a lack of team speed and size to limit the Pac-12's best recently. Saturday's Stanford game was one of the best examples of that. It was not just the numbers – Stanford had one of its worst offense showings of the season – but the tone as well. Other than a 70-yard touchdown – the result of a blown coverage – and a long second-half scoring drive – helped considerably by a horrendous third-down pass interference call – the Cardinal never seemed to threaten WSU. There were a lot of three-, four- or five-and-out possessions. Such results never seemed in the cards when the season began. And a big part of the credit goes to Breske. Not only does he and his staff get the Cougars to play hard – they did that the past couple years as well – but he has come up with imaginative ways to allow them to succeed. It's not just scheme, though that's part of it. It's not just substitution patterns, though that's part of it. It's a combination of both – and a belief they will be successful. This Cougar defense believes in itself. That last couple years it hoped it could get off the field. This year, it believes. That's a huge difference.

• Washington State: There was no practice last night so no post-practice blog post from Christian Caple. He did, however, have a story for today's paper making it clear another bowl-less season is on the horizon, and that it will be come a certainty as soon as WSU drops another game. He also has a morning post. ... Bud Withers has a look at this crazy Pac-12 season. ... Ted Miller moves WSU up a couple spots on his weekly Pac-12 power rankings, with the Cougars now ahead of two teams that defeated them. Seems about right, considering how well they played last weekend. ... If Oregon keeps winning by 50 points or more, it may drop out of the BCS standings all together. 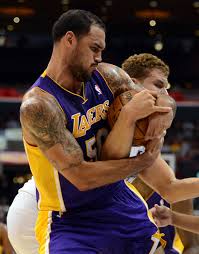 • Gonzaga: Jim Meehan took another look at Saturday's exhibition with this blog post. ... In alum news, it looks as if Robert Sacre (pictured) is going to see some time with the Lakers. We can all see how big Sacre is, but if you ask the GU coaches, they will tell you it's all the little things Sacre does – talking on defense, bringing energy to practice, focusing his teammates each possession – that sets him apart. ... And then there is this on Ronny Turiaf. ... Finally, some photos of Adam Morrison through the years.

• Idaho: The university confirmed Josh Wright's report on the football dismissals and suspension.

• Chiefs: Spokane was off, but a couple of its rivals faced off last night, with Portland winning.

• Seahawks: The majority of the pixels expended today focused on the defense, or lack thereof. Those type of stories probably weren't not what you were expecting to read this morning. But there's another type of story that was just as unlikely. The offense was pretty darn good, with Russell Wilson and the passing game coming through all day. Even though one of the receivers was inactive. ... So let's get this straight. The defense loses a player and can't overcome it. The offense loses a player and does. That's part of the reason the defense isn't elite just yet. ... Almost forgot. The final score was 28-24 Detroit.

• Sounders: Though it might not seem like it, the Sounders had a lot to play for Sunday night and didn't come through. The 1-0 loss means the second game of the two-game Real Salt Lake series will be in Utah, an advantage the Sounders could have grabbed with a tie or win yesterday.

• That's it for this wet Monday morning. We'll be back again tomorrow. Until then ...