As we get closer to Halloween and the cold winds of November, the focus needs to widen a bit. Yep, it's almost college basketball season – heck, the NBA opens tonight – and all that entails. Read on. 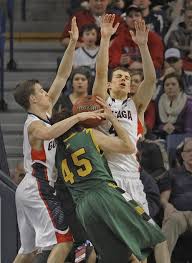 • For some reason, the West Coast Conference held its basketball media day yesterday in Los Angeles, the land where western conferences not known as the Pac-12 go to hide. Of all the West Coast cities in wihch to disappear, none would be better for the conference than LA. At least the Bay Area media covers St. Mary's, USF and Santa Clara a bit. The Los Angeles folks would have trouble getting you to Loyola Marymount, and it's just a couple chest passes from LAX. Of course, they all know where Pepperdine is (aka, the school you drive by on the way to the Kardashian's beach place) but when it comes to college sports, in Los Angeles there is USC, that UC school by the good movie theaters in Westwood and then everyone else. Thank goodness Al Gore invented the Internet or we would never know the WCC exists. And that's despite it being the Pac-12's near-equal in basketball and one of the top five or six best basketball conferences in the nation. Though Gonzaga was a near-unanimous pick to win the conference title this year, St. Mary's, BYU, Loyola and Santa Clara are all going to be tough outs every night this season, making the top echelon on the conference as good as any west of the Mississippi (and that includes the Big 12). And with San Diego and Portland improving, last year's bottom half has gotten better as well. So here's to the WCC, though it would make sense for a conference headquartered in San Bruno (just south of San Francisco) to hold its media day in a better place. ... Lost in all the talk yesterday about Gonzaga and BYU and St. Mary's, the conference announced a new deal with Time Warner Cable's SportsNet, a cable channel in Southern California. The deal should help the conference's profile in the LA area. Hey, that's probably why the media day was in Los Angeles. Mystery solved.

• Washington State: Christian Caple will be on his way to the Pac-12 basketball media day Thursday – held in the Bay Area this year – but until then he concentrates on football, most importantly Saturday's game at Utah. Mike Leach and three players met the media yesterday, with Christian transcribing Leach's comments for this blog post. We also have the videos from Jeff Tuel, Darryl Monroe and Travis Long below, all courtesy of WSU. ... Christian put together this notebook in today's S-R and has his morning post as well. ... The contenders have separated themselves from the pretenders in the conference as we welcome in November. ... A quick look at this weekend's games. ... Farther down the road, Auburn is happy to welcome the Cougars back next August 31 for the 2013 season opener. ... On the basketball front, Ken Bone picked up his third commitment of the 2013 class, another 6-foot-8 forward. The announcement, covered by Christian in this blog post and short story, came via Twitter, which means WSU's football players had no idea.

• Gonzaga: Jim Meehan has this story in the S-R about the WCC media event. ... Around the conference, there was a lot of coverage in the Salt Lake City papers and some from the Bay Area and San Diego. ... The Sports Network has this preview of each of the WCC's teams.

• Idaho: Interim coach Jason Gesser met with the media a couple times Monday and Josh Wright covered both. He summarizes what Gesser had to say in this blog post and adds more in this story. ... This week's opponent, San Jose State, graded out well last week. ... Howie Stalwick called my attention to this piece from San Francisco on former UI guard Mike Iupati, vying to become the best offensive lineman on the 49ers.

• Seahawks: When it comes to what went wrong in Detroit, it's easy to figure out: the third-down defense. But the Hawks problems at the halfway point of the season are deeper than that, including a lack of depth at the wide receiver position. They're all items on Pete Carroll's to-do list. 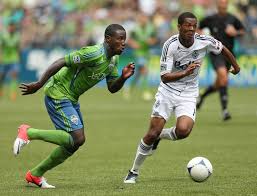 • Sounders: Is Eddie Johnson (pictured) OK? The Sounders should find out today. ... They found out their postseason schedule yesterday.

• Mariners: Now that the World Series is over, the hot stove league (as opposed to the Hot Stone League) can begin. It did in Seattle with the free agency of a handful of players and will continue throughout the winter. ... It's also awards season and a couple of M's are up for defensive honors. ... The Mariners filled a front-office vacancy.

• NBA: The league kicks off tonight with a couple of big games (Boston/Miami, Los Angeles/Dallas) and a hope that it won't be all that long and the NBA will be back in Seattle. David Stern's going-away present, perhaps?

• That's what we have for you today. Hope it's enough. We'll be right here tomorrow. Until then ...