What do all these drug suspensions in baseball really mean? I don't know. And I'm not sure anyone does. Read on.

• Does baseball's actions yesterday, in which it suspended 13 players either for the rest of the season – the non-Alex-Rodriguez dozen – or for the rest of this season and all of next – Rodriguez – mean the sport is now clean? Heck no. That's the only thing I'm sure of. There are still guys out there, stars, average players, guys just trying to get by, who are using some sort of PEDs to get an edge. There is too much money at stake, the consequences too minimal – yesterday's actions included – not to push the envelope. These guys, along with Ryan Braun earlier this season, were only caught because the place where they received their fix was brought down by a disgruntled employee or two. If not for a story in Miami's New Times newspaper – who needs those outdated entities anyway? – the dozen or so guys hit with penalties yesterday very well could still be using and playing. Posting bogus numbers. Earning a ton of money. And costing others, quite possibly guys that aren't cheating, jobs. The problem isn't going away. When a guy like Braun can juice then sign a multi-million dollar contract, then take a less than 10 percent pay cut as penalty, others are going to see PEDs as a road to a lifetime of riches. If Nelson Cruz sits out the rest of the year, goes to arbitration next offseason and gets a raise on his more than $10 million contract this year, the problem will continue to grow. And every game Rodriguez appears in prior to his appeal being heard – it probably won't be decided until the season is well over – just cheapens the process. Let's be clear here. The game will never be clean until the players, as a group, decide it must be clean. Until they band together and allow the penalties for cheating to be so horrendous no one would want to risk it. Lifetime bans. Forfeiture of contract money, including any money earned while using. Only then will the drugs go away. And that is never going to happen. Never. So players will continue to cheat, chemists will continue to develop new ways to help them and the game's records, the connection to the past, will see their significance chipped away over time. Heck, just look at the list of career home run leaders right now. Atop the list is Barry Bonds, a guy we all know – yes, even you Giant fan – used PEDs to help amass a goodly number of his 762 homers. Hank Aaron (755), Babe Ruth (714) and Willie Mays (660) are untainted, but then there is Rodriguez sitting in fifth at 647. Two of the top five, chemistry-enhanced. Four more guys in the top 14 (Sammy Sosa, Mark McGwire, Rafael Palmeiro and Manny Ramirez) also for-sures, with doubts always circling about a couple more in the top 25. It's probably not going to stop, despite what happened yesterday. And I'm sure of one thing. That's sad.

• WSU: Christian Caple is back with a morning blog post which links his report on the Cougars' preseason camp (including a story, video and blog post) along with other Pac-12 links, taking me off the hook. Of course, I've found a couple others. That's what I do. ... My favorite is this Register-Guard story that contrasts the money spent on the new Oregon football building with all the needs throughout the university. Priorities. ... Larry Scott wants changes in the one-and-done rule with the NBA. ... Dennis Erickson is back where he belongs. On the football field.

• EWU: Though the Eagles don’t get going until tomorrow, there is some Big Sky news. ... Montana begins its first season under NCAA probation today with the start of camp. ... Weber State also begins its second year under coach Jody Sears today.

• Idaho: The Vandals hit the field yesterday for the first season under coach Paul Petrino and Josh Wright was there. He has a story on the first day of practice and a blog post with more. ... Former UI coach John L. Smith has a new job.

• Youth: It's Tuesday, so we can pass along the weekly youth sports notebook, a summer staple. 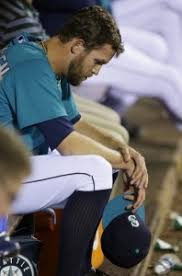 • Mariners: If you were to go back to the beginning of the season and look at the bullpen, you could have predicted the M's would be struggling right now if you had an inkling of the changes ahead. Stephen Pryor is hurt and out for the year. Carter Capps is in the minors trying to regain his command. And now so is the season-opening closer Tom Wilhelmsen (pictured), done in by too many poor performances. (Here's one way to salvage him.) The bullpen, which looked to be on the rise when the season began, has been basically rebuilt. ... One of those relievers, Oliver Perez, has been struggling lately and his inability to get outs cost Hisashi Iwakuma and the M's last night. He and Yoervis Medina, who has been effective recently but wasn't Monday. They combined to give up the lead to the Blue Jays in the eighth and the M's lost 3-1 in front of a pro-Canadian crowd. ... Look who started at second base yesterday? Yep, the former phenom, Dustin Ackley. ... Of course, one of the guys suspended yesterday was Jesus Montero, whose punishment just proves using PEDs alone doesn't make you faster. Or a better hitter. Then again, think of what he might be without them. Oh wait, that's probably what's happened this year. Now I get it. So do the rest of the Mariners and they aren't too happy.

• Sounders:  The Sounders drew a large crowd yesterday for Clint Dempsey's introductory press conference. Is the sporting appetite in Seattle changing? Whatever, Dempsey's introduction was a big deal yesterday. Just as his signing proves Seattle wants to win an MLS title. Now, not next year. ... Want to know how the Sounders came to entice Dempsey to leave England and return to the States? Just read this Sports Illustrated story.

• Seahawks: Walter Thurmond (pictured), finally healthy and ready to compete, is making a pitch for more playing time at defensive back, whether it be at corner or at the nickelback spot. ... The same can be said of Mike Morgan at linebacker and Luke Willson at tight end. ... The first preseason game is Thursday in San Diego and here's another look at the depth chart.

• Another day, another appearance on the radio. We are on today from 3 to 6 p.m. You can listen here. See you back here tomorrow. Until then. ...