It's been a long time. A really long time. But tomorrow morning Washington State University football fans can root for their team in a bowl game. What has the last decade meant? Read on.

• Before we get into the metaphysical aspects of the Cougars' bowl appearance, let's clean up some housework. We wrote yesterday about defensive lineman Toni Pole's academic ineligibility. It lasted all of 24 hours. Pole flew back to Pullman, cleared up whatever it was that needed to be cleared up, and made a quick return trip to Albuquerque. Mike Leach told Jacob Thorpe after practice yesterday Pole would actually start Saturday's New Mexico Bowl, despite not practicing Thursday. So all the hullabaloo about Pole disappeared like a soap bubble at a children's birthday party.

• Let's hope the excitement about WSU's first bowl appearance in a decade doesn't disappear as quickly. Jacob has a story today in which athletic director Bill Moos makes it clear he feels the Cougars are ahead of schedule, at least as it concerns bowl appearances. He didn't expect one until next year. But just the fact it's so high up on his list of things to accomplish tells you how much the athletic department – and the Cougar faithful – lusted after a postseason bid. The last 10 years haven't been a dry spell, it's been an out-and-out livestock-are-dying, crops-are-blowing-away, drought. In my five seasons of covering football in Pullman the most common explanation behind any move made concerning the sport revolved around returning the program to the point where bowls were commonplace. You know, like that three-year stretch at the beginning of the decade. Which, coincidentally, was the only time in the school's history bowl appearances were commonplace. Bill Doba couldn't make it happen. Paul Wulff couldn't make it happen. So Mike Leach (pictured), a guy who went to a bowl every year he was in Lubbock, was brought in to make it happen. In his second year he has. Yes, the Cougars finished the regular season 6-6. And yes, the bowl they are traveling to isn't among the nation's elite. But WSU is playing tomorrow in a postseason football game. That hasn't been the case since 2003. Which does one interesting thing to the program. It checks off a goal. Now goals have to change. A 6-6 record and a New Mexico Bowl bid next year doesn't cut it. Progress has to be made. Expectations have been raised. Just getting a bowl bid will be old hat. The old what-have-you-done-for-me-lately mantra will surface. But that's for next season.

• What about this one with one game left? I do believe Washington State will win. The Cougars' schedule, one of the most challenging in the nation, has prepared them for this game. But Colorado State has one thing that has given WSU fits this season: offensive balance. Teams that can mix the run and the pass effectively have befuddled the Cougar defense a bit (for the most recent example, just rewatch the Apple Cup). However, the WSU offense, if it hasn't lost it's edge with the long break, should be able to gash a CSU defense that has had its problems. With that in mind I'm picking the Cougars to win a 42-35 shootout. An entertaining shootout. Which should make everyone happy.

• WSU: Jacob has more from New Mexico, of course, including a feature on senior linebacker Justin Sagote, who has emerged as a solid player in his two seasons in Pullman. ... Besides his story that we linked above, Jacob had a blog post on Pole's eligibility posted as soon as the news broke. ... As usual, Jacob has a morning post with links as well as a look at the 2001 Sun Bowl and a live chat yesterday. ... Bud Withers has a feature on tackle John Fullington and more on Pole's situation. ...  In the know-your-opponent category, the Rams are impressed by WSU's passing offense and safety Deone Bucannon. That makes sense. So does Leach standing up for his offensive linemen. ... Colorado State's offense improved after the first two games, both losses. A big part of it is the play of Kapri Bibbs. ... UW assistant Tosh Lupoi denied the allegations of recruiting violations contained in a Los Angeles Times report. ... Who will win the Pac-12's bowl games? Here are some predictions.

• Gonzaga: It's been a long time since Angel Nunez (pictured with Adam Morrison) has played a basketball game but the 6-foot-8 transfer from Louisville hopes to help right away. As Jim Meehan's story explains, he's eligible this weekend. ... St. Mary's has tied the best start in school history, 9-0. ... BYU has another tough test this weekend, at Oregon.

• EWU: One of the biggest difference in the Eagle offense right now is the emergence of Quincy Forte (pictured) as a 200-yard-per-game running threat. Jim Allen has more in this feature. ... Jim also has a story on the attendance at last week's playoff game, a live chat from yesterday and an advance of Eastern's two-game East Coast basketball swing. 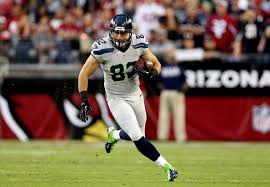 • Seahawks: Thursday is a day when two of Seattle's biggest stars, Russell Wilson and Richard Sherman, meet with the media, so we have their interviews. And it's also another day in which Pete Carroll speaks, so we have that as well, along with defensive coordinator Dan Quinn's comments. ... But there is more, of course, including a feature on rookie tight end Luke Willson (pictured) and the injury report. ... The Hawks are really good at the play-action passing game. ... Brandon Browner is still fighting his suspension. ... Despite a concussion, it looks as if Larry Fitzgerald will play for the Cardinals.

• Sounders: Forward Kenny Cooper, acquired recently in a trade, agreed to terms with the Sounders yesterday and hopes to stay in Seattle a long time.

• That's what we have for this Friday. That and one more day on the Patchin, Lukens and Osso radio show. We're on between 3 and 6 p.m. If you want to listen, here's a link. Until then ...