This Super Bowl had everything. It was a rout, than it wasn't. There were big plays on offense, big plays on defense and a fourth-quarter call that really ticked off Jim Harbaugh – though, to be fair, the 49ers' Harbaugh seems like a guy who gets ticked off if McDonald's leaves a pickle on his burger. There were expected stars and unexpected standouts. Heck, even the halftime show was dramatic. But there was more. Read on.

• Of course there was more. There was a blackout that changed the momentum of the game completely. (By the way, if you don't believe in momentum – and I understand such skepticism – then at the very least you have to admit the delay allowed the 49ers to regroup and they were a better team from then on.) And there were commercials that caught our eye. I would have to say, after a bunch of years with boring-as-heck commercials, the industry had a comeback yesterday nearly as dramatic as the 49ers. I had a couple favorites (the Tide Joe Montana stain one comes to mind, as does the Paul Rudd/Seth Rogen/LeBron James Samsung commercial) but I'm sure your list included others. And the food was incredible. Wait, that might not have been the case for everyone but at our house, the ribs were delicious, the shrimp divine and those little hot dogs stuffed with cheese and wrapped in crescent roles? They were to die for. All-in-all, a great day made greater by one delicious fact: The team I picked to win actually did. That doesn't happen all that often. I am bragging while I can. 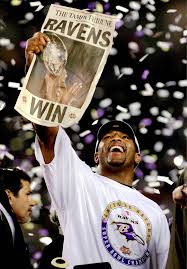 • OK, so you want links. We have them. We'll start with the commercials, in case you were too busy to watch them. Now you can catch up with all of them. ... The non-call on fourth down – if illegal contact or PI had been called, the 49ers would have had another chance to take a last-minute lead – is the subject of Jim Harbaugh's wrath and a couple stories. ... The Ravens picked on a guy who put his foot in his mouth and had been picked on by the media all week. ... Of course, we can't do links without covering the power outage. ... Did CBS have a power outage of its own? ... The 49ers' future looks solid (could they challenge the most unbreakable record in sports, the Bills' four consecutive Super Bowl losses?) though they are in the same division as the up-and-coming Seahawks. ... We knew we could find a story that focuses on Ray Lewis' final game (left). ... Joe Flacco (pictured above) was Super Bowl MVP at just the right time. ... Finally, San Francisco still thinks it is the better team.

• Washington State: Not a lot from Cougar land, though Christian Caple does find some links for his morning post. ... The WSU women swept a road weekend, a pretty rare occurrence lately. ... Jon Wilner takes a quick peek at recruiting rankings.

• Gonzaga: Jim Meehan raced home to see the Super Bowl – I can recall a couple of years watching part of the game at SeaTac; it isn't as fun as watching it home with the family – but before he did he looked back at the USD victory. ... The Toreros are BYU's next opponent but the Cougars are not their's.

• Sounders: Brad Evans and Eddie Johnson will be part of the U.S. National team as it tries to qualify for the World Cup.

• That's it for this post-Super Bowl Monday. And yes, I believe more than ever today should be a national holiday, though the aspirin helped. Until later ...