Tonight there will be tears. Tears of sorrow. Tears of joy. Count on it. Read on.

• High school basketball seasons have cruel endings. Only six boys and six girls teams that make the playoffs get to slump their shoulders in relief, having won their final game. The rest, dozens and dozens of teams, see their season end in defeat, often a harsh, one-or-two-point letdown. After spending weeks, months and sometimes years working toward and dreaming about winning a state title, the rug is snatched from under those dreams. Sometimes the fall isn't pretty. But sometimes it isn't all that bad. See, there are teams whose goals are a bit different. They know they're not good enough to win a state title. They've seen the best of the best and they're not part of it. Nothing wrong with having a bit of self-realization. So there is another goal. The goal is making a trip to Yakima or Spokane or Tacoma, the state tournament sites. The trip is the reward for all their hard work. Speaking of long trips, you might be wondering where am I going with this. There is a reward, I promise you. See, tonight is the first night of the state tournament, held at sites all over Washington. In a bid to cut down on costs, the WIAA a couple years ago decided to hold the round of 16 the weekend before, winnowing the field to eight before gathering at one of the big venues. And the first game – girls play tonight, boys tomorrow – became a loser-out contest. Want to make that trip to Tacoma? It doesn't matter if you are 24-0 or 12-12, win tonight and you get to. Want to spend a weekend in Yakima (ya, I know how that sounds)? You have to survive tomorrow. Want to follow in your granddad and dad's footsteps and win a B title in Spokane? You have to get through tonight or tomorrow. And that brings us, in a road with more twists and turns than U.S. 2 through Stevens Pass, to our point. Tonight, eight girls teams in six classifications will be jumping up and down with joy. Eight will slump to the floor. The same thing will happen tomorrow with the boys. Sports can be cruel at times. It also holds the promise of a reward that exceeds the dreams of a lifetime. Funny, all over the state tonight and tomorrow, both will happen at the same instant.

• One other thing today. The M's open their spring schedule in Peoria and the game will be on the radio. It may be snowing outside right now (yes, it is snowing lightly in my part of Spokane) but there is major league baseball on the radio. Nothing, and I mean nothing, is a better harbinger of spring than that. For some 50-odd winters I've looked forward to this day throughout November, December, January and much of February. It's here. The promise of spring has been fulfilled. And today also carries one other promise. The promise we'll all make a snap judgment on new Mariners' radio voice Aaron Goldsmith. He'll join Rick Rizz for the first time today. I'm looking forward to hearing what he has to say – and how he says it.

• By the way, we've never had a poll that had such a runaway winner. College basketball was the choice of 92 percent of the respondents the past couple days, with just 3 percent picking the NBA. I'm sure a little of that is residue from the way the Sonics left the area, but not all of it. More than anything, this is an area dominated by college sports. So we switch gears today. Think the Cougars will win again this year? Or will the season end without any joy in Pullman? 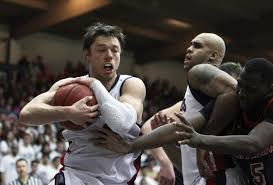 • Gonzaga: With no game last night, Jim Meehan took the time to look back at GU's dominating win over Santa Clara. ... With the night off, I'm sure the Zags watched the showdown in Moraga between BYU and St. Mary's. The Gaels had a lot more to lose – BYU is NIT-bound unless it wins the WCC tournament – and they played like it down the stretch, winning 64-57 and clinching the second seed to the tourney. They also kept their NCAA at-large hopes alive. ... Portland is playing better and last night put a dagger in USD's hope of finishing in the top four. ... The GU women were in action, clinching at least a share of the WCC crown with an easy 70-55 win at Santa Clara. Chris Derrick has a blog post on the significance of the victory. The Bulldogs have a big game Saturday at BYU, with a win in that one ensuring GU of the outright title.

• Washington State: Christian Caple is on the road in Arizona, though that didn't stop him from holding a live chat yesterday and putting up a morning post today. In other news, Phoenix-area In-N-Outs report they have run out of beef, lettuce, buns, sauce and french fries. Coincidence?

• Idaho: The Vandals will be back in action tomorrow but today we pass along a Utah State story.

• Whitworth: The Pirates' successful season almost came to an abrupt end last night at home, when they had to rally to keep their NWC tournament title hopes alive. Steve Christilaw and Colin Mulvany were at Whitworth last night, with Steve supplying the words and Colin the photos. ... The Whitworth women also are still playing, after upsetting Whitman in Walla Walla last night.

• CCS: Think it would be cool to have a trophy named after you? Maury Ray knows what that is like.

• Chiefs: It's not often a hockey player switched positions in midseason. Especially from a right winger to defenseman. Chris Derrick has the story and blog post on the Chiefs' Blake Gal who did just that.

• Mariners: With games beginning today, the coverage is all over the map, from Jerry Brewer's column on closer Tom Wilhelmsen to Michael Saunders' newest hitting contraption to the news a couple of infield starters aren't ready as of yet. But that's not all. There is a feature on a newbie and the usual story of hard work.

• Seahawks: Guess what? The draft is still a ways away, but that doesn't mean it's too early to start examining the players Seattle might take where and the ones the Hawks will keep – including the quarterbacks. After all, the combine is this week.

• Sounders: As the regular season draws ever nearer, Seattle is tweeking the roster, including the all-important designated players. ... The Sounders women have hired a coach and general manager. It's the same guy.

• We'll be out at University this evening for a state game featuring the Titans and Holy Names. And yes, we expect one team to be ecstatic and the other to be down in the dumps. We just don't know which is which. ... By the way, the headline refers to a song Simon wrote years ago titled "One Man's Ceiling is Another Man's Floor." It didn't have anything to do with sports, but I always liked the title. Until later ...