The headline hit me like a Montee Ball run up the middle. "41-year wait is over; Stanford gets Roses." It has been 41 years since Stanford won a Rose Bowl game? Really? It seems like only yesterday. After all, the last time the Indians – as they were known then – won, I was sitting in the stands. In the south end zone, actually. And I was shocked by how wide the splits were on Stanford's offensive line. They were like a yard wide, if not more. Stanford coach John Ralston was Mike Leach before Mike Leach was Mike Leach. Read on. 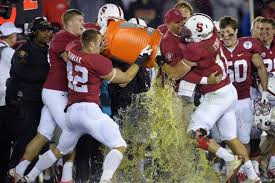 • Stanford wasn't nearly as physical as its opponent that day, Michigan, so Ralston's idea was to spread the Wolverines out and make them run with the faster Stanford offensive players. Sound familiar? If the bottom line is winning, which it always is, then Ralston's plan worked. Though the final score was 13-12, Stanford, with Rod Garcia kicking a game-winning 31-yard field goal that landed about five rows in front of a then 15-year-old Vince Grippi. Hardly an offensive show. But then again, neither was yesterday's Rose Bowl. Instead it was two physical teams pounding each other for 60 minutes, with the Cardinal – as Stanford is now known – winning 20-14. It was a throwback game Bo Schembechler would have appreciated. The Badgers, a distinct underdog after a 4-4 Big Ten season, had a chance to win on their final possession but the game's only turnover, an interception by Stanford's Usua Amanam, sealed their fate. The Cardinal defense wasn't at its best yesterday, but it was good enough. Too bad it didn't have a cool nickname like the defense had in 1972, when it was known as the "Thunderchickens." Now that's a moniker a school could be proud of.

• Washington State: Now the holidays are really over, Christian Caple and the Cougars can get back to a routine. It begins today with Christian's blog post and coach Ken Bone's press conference this afternoon.

• Gonzaga: Believe it or not, the West Coast Conference schedule begins tonight (USF is at Santa Clara), though the Zags don't kick off conference play until Thursday in Malibu against a better-than-expected Pepperdine team. Jim Meehan not only had a day-after blog post on the Oklahoma State win yesterday, he put together this WCC preview that ran in today's S-R. ... Here's another conference preview, this one from the San Francisco Chronicle.

• Seahawks: So how did Pete Carroll build this playoff-bound Seahawk team? With a high-energy blueprint. Or brick by brick. Take you pick. ... Rookie cornerback Jeremy Lane is one of the key bricks. ... It just feels right that the Hawks are meeting Washington in the playoffs. ... Though it's only partly about the Hawks, Art Thiel's column today seems to be worth passing along.

• Sounders: The top 30 stories of the year for Seattle's MLS franchise.

• Not only was 1972 the last year Stanford had won a Rose Bowl (until yesterday), it was also the last year the West Coast's roads were actually safe. I got my driver's license later that year and the term "road rage" was born. Until later ...