It's sort of tough to get into the writing mode this morning. But I have a pretty good reason. Read on. 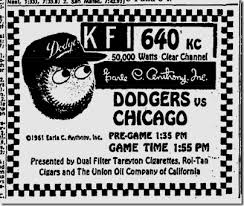 • July 10 was always a pretty big day around the Grippi household. The patriarch's birthday always is, isn't it? Yep, this would have been my pop's 88th birthday. Got thinking about that last night as I listened to the Mariners' game. How many times in the 1960s and early '70s had I sat with my dad and listened to Vin Scully describe the action from Dodger Stadium? Too often to count, that's for sure. The best were the warm summer nights when we would be headed somewhere in his old Scout car, windows down, radio on, the noise of the under-powered engine making it hard to hear. The Dodgers weren't all that good in the late '60s after Sandy Koufax and Don Drysdale had retired but Scully was worth listening to even if he was reading the phone book. The vagaries of AM radio being what they were, if we were headed down Sierra Madre Blvd., toward Pasadena, the Spanish-language broadcast would often intercede as we drove by the radio tower of the station that carried the broadcast. I can remember the Spanish description of the game wafting in, with the only words I could recognize being the names of the players. "Ahora camina a la placa es Ron Cey. Él va seguido por Dusty Baker." A half-mile down the road Jaime Jarrin's voice would recede and Scully's would return. Sometimes, if we had to go inside a store or market, dad, a notoriously impatient man, could be talked into waiting for the inning to end before we left the car. Of course, if Jerry Doggett was in the booth, the radio was clicked off and the doors locked even if the Dodgers were threatening to score. The Dodger games in those days were broadcast over KFI, a 50,000-watt, clear-channel station. I know of people here in Spokane who could pick it up at times, but its long reach also resides in my memory. I remember sitting in the car with dad at Lake Alamnor, where he had bought a lake cabin in the early '70s, leaning forward to hear Scully's voice from more than 500 miles away. Most of the time he had to get back inside quickly to keep my mom happy (that was an imperative in those days, the years leading up to their divorce), but I could sit there and listen as long as I liked. I just had to make sure the battery didn't run down. It's funny isn't it? A few words on the radio, a certain date on the calendar and you are headed down memory lane. It's a sad trip.

• WSU: No Cougar news to pass along, but it was a bad day for the Huskies, what with news of star receiver Kasen Williams' alcohol-related driving citation from May finding its way into the news. ... Utah and BYU have agreed to renew their rivalry in football. ... Steve Alford isn't going anywhere for a while, thanks to the buyout clauses in his UCLA basketball contract.

• Indians: No game yesterday for Spokane. The Indians will be at Salem-Keiser tonight.

• Shock: The Shock have clinched a playoff spot with three games remaining, but that was never their ultimate goal. To get favorable playoff positioning, they may need to win out to keep ahead of San Jose via the tiebreaker. Jim Meehan has more leading up to this weekend's game at Jacksonville in his weekly notebook.

• Golf: It's mid-July. Time for the Lilac Invitational. Jim has an advance.

• Mariners: OK, so maybe we were premature yesterday. The M's bats were still potent, but Hisashi Iwakuma, named to the All-Star Game earlier in the week, continued his inexplicable mid-season slump as the M's blew a four-run lead and lost 11-8 to the Red Sox. ... Geoff Baker seems to think the OPS is the be-all and end-all of statistics. He uses it to compare Kendrys Morales and Justin Smoak, as they have similar numbers (if you don't know, OPS is on-base-plus-slugging percentage). Here's the problem. They both play first base and/or designated hitter. They both are expected to be middle-of-the-order bats. First basemen/designated hitters and middle-of-the-order guys are supposed to drive the ball. Middle infielders and outfielders are supposed to get on base and use their speed. Smoak's OPS of .783 (as of this morning) is made up of a .367 on-base and .416 slugging, a fine percentage if you are a lead-off guy. Morales' OPS of .802 is made up of a .340 on-base and .462 slugging, which is closer to what you want for a power hitter. So don't use this stat as an argument the two fill the same role and Smoak is younger and cheaper. And, by the way, Morales has 13 home runs and 51 RBIs in 329 at-bats. Smoak has 7 and 17 in a third fewer. ... Danny Hultzen is going to rest for 10 days and then the M's will see how his arm responds. ... Mike Carp has carved out a role with Boston.

• Sounders: Fredy Montero, about to be an ex-Sounder for good, was at practice yesterday to talk with his old friends, including the media. ... The U.S. national team destroyed Belize in Portland, 6-1. ... Joshua Mayers has his MLS power rankings.

• Seahawks: The Hawks will try to set a record in the home game vs. San Francisco in September. Well, the fans will.

• Sorry to take your time with personal reminisces. Just wanted to wish my pop a happy birthday. Too bad he's not around to read it. Until later ...