Even before the first pitch, you had a feeling Mariano Rivera would have a role in the outcome of Tuesday's All-Star Game. After all, it was the final All-Star Game for the greatest relief pitcher of all time (for once, that type of hyperbole is matched by the record) and the game was in New York, the city he has called home his entire baseball career. Lo and behold, the pregame feeling turned into reality. Read on. 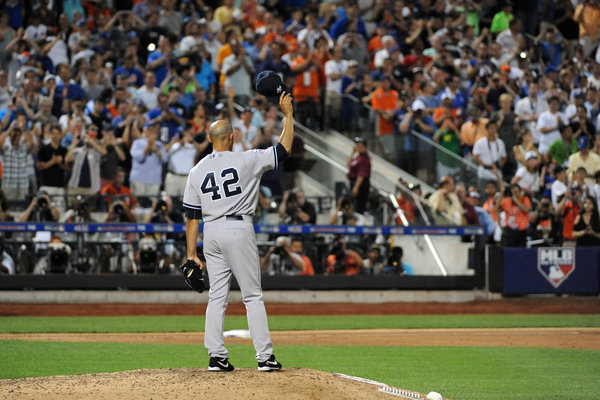 • Before we get going, I have to admit I didn't get to see any of the game. I was flying for the entirety of the event, so television was out, unless I wanted to spend the $10 on in-flight Wi-fi. I decided to pass. But I figured there had to be some Rivera magic somewhere. When it comes to baseball, New York and the Yankees, things always seem to work out. And for once, there was a guy on the bump – albeit in the eighth inning – who had earned one final curtain call. A perfect eighth and Rivera had earned the MVP award after the American League's 3-0 victory. No matter what's at stake – and we all know it's bogus having home field advantage in the World Series decided by an exhibition – the All-Star Game is about celebrating the best players in a game that has a 150-year history of celebrating its best players. So Rivera's perfect appearance was seemingly preordained. But he's not a starting pitcher or a hitter, so the logistics of getting him into the game at just the right time was tough on American League manager Jim Leyland. If he saved Rivera for his usual spot in the ninth and the National League rallied in the eighth, Rivera might not see the field. So Leyland used him in the eighth, the players on both teams conspired to give him a moment in the sun alone and the deed was done. When this season is finished and Rivera retires, baseball will have lost one of his class acts. The hardest part of rooting for the guy is the uniform he wears. Get past the pinstripes and underneath is not only one of the best pitchers the game has ever scene, but a humble, hard-working solid professional who is a credit to the game. A Hall of Famer if there ever was one.

• WSU: The Cougars game time at the opener in Auburn was announced yesterday (it's 4 p.m. PDT if you are wondering), as was the television partner (it's ESPNU). Christian Caple has more in this blog post. ... ESPN.com's Ted Miller examines the Pac-12 running backs and wonders if the position even matters to the Cougars.

• Indians: Spokane's pitching was pretty darn good last night in a quick 2-1 victory over the Tri-City Dust Devils. Chris Derrick was there and has the story along with more on manager Tim Hulett's ejection Monday night in this blog post.

• Shock: The season is winding down, which means it's time for Jeremy Geathers (pictured) to return to the team. Jim Meehan has more in his weekly notebook.

• Golf: The pros who play in this week's Rosauers Open at Indian Canyon may see a bit different course. Jim has an advance on Spokane's long-running tournament.

• Mariners: No game yesterday, of course, but Larry Stone was in New York and he caught up with a few former M's who are now all-stars for someone else. He always has a lot of players to choose from. ... Felix Hernandez's inning wasn't perfect, but it was scoreless. ... The next few months will decide the future of the Mariners' brain trust. ... Baseball's drug policy will be tested again over the next few weeks as the Biogenesis scandal comes to a conclusion.

• Sounders: The Sounders are really snakebit this year, especially at goalkeeper. There are three of them injured right now, including starter Michael Gspurning. A player signed just days ago, Andrew Weber, will probably be in goal Saturday against Colorado. ... Joshua Mayers has his MLS power rankings. ... The U.S. edged Costa Rica, 1-0, in Gold Cup action.

• Seahawks: The Hawks schedule may end up being tougher than it looks, throwing a wrench in all the preseason hype.

• If you are wondering, I hit In-N-Out about 11 p.m. last night and ate way too much. However, my non-scientific study of nutrition leads me to believe calories built around nostalgia only count half as much as usual when they get into your body. That could be why I always have trouble shedding pounds. Until later ...