I was a little disappointed to see Mark O'Meara shoot a 78 today in the British Open's second round. After all, his 67 on Thursday had me a bit nostalgic. Read on. 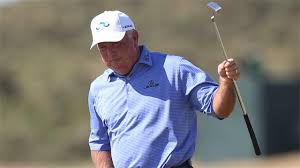 • Over the years, I've written about more athletes than there are people in line to ride the Matterhorn at Disneyland. But you never forget your first. And my first published story was about Mark O'Meara (pictured). Yep, it happened more than 30 years ago. One of my first full-time jobs after college was as an assistant sports information director at Long Beach State. Though I helped with football – the first road trip I remember was to Boise, where I was impressed with the tree-lined streets and friendly people – my emphasis was on other sports. And then SID Terry Ross had me write features on 49er athletes. That included Mark O'Meara. I interviewed the reigning U.S. Amateur champion on his decision to leave Long Beach and turn professional. As we were almost the same age and had both spent most of our life in Southern California, we had a basis of knowledge to draw from, which always makes an interview easier. Afterward, I put together the feature and Terry sent it out as a press release. Lo and behold, the Orange County Register liked it and ran it complete under my byline (newspaper ethics, at least at the Register, were a little looser then), listing me as a contributor or something. I have the story in a box somewhere at home (my dad clipped it for me and gave it to me, along with every other byline I had in the paper before moving to Spokane), so I could prove it if I had to. O'Meara went on to a pretty decent professional career, his two major wins overshadowed a bit by a relationship he was to develop later on with Tiger Woods, who grew up down the road from Long Beach State in Cypress. But whenever he teed it up, O'Meara had at least one fan in his corner, someone I'm sure he's forgotten about but who can't ever forget about him.

• WSU: Ted Miller thinks Washington State's defense could be sneaky good. ... I also love Miller's one sentence description of the Cougars in his look at Pac-12 tight ends. ... I meant to pass this along yesterday morning but forgot to. It's a look at how Oregon's marketing helped bring the football program to prominence. Though Bruce Feldman is a good writer, he missed a key component in this story. See if you can discern who is missing. ... Here's one man's thoughts on the Pac-12 football race.

• Gonzaga: Former Zag Ronny Turiaf signed with Minnesota, where he had a connection he can't forget.

• Indians: The Hillsboro Hops were struggling until the Indians came to town last night. The Hops won 5-3 after a seventh-inning rally.

• Shock: Though Spokane has clinched a playoff spot, the last two weeks of the season still hold one key component: playoff seeding. Jim Meehan explains what tonight's game with the San Antonio means in this advance.

• Mariners: The next few days, and how their youngsters perform, may just decide whether the M's begin to reshape their lineup for the future or stick with the current roster and try to make a late-season run.

• Sounders: With Eddie Johnson having to leave for national team duty (pictured), the Sounders' lineup will change once again. ... One of the early changes, adding Obafemi Martins, is probably a really good thing. ... The Sounders have been pretty darn good against Colorado. ... Osvaldo Alonso wasn't surprised his red card disappeared.

• Seahawks: A couple more questions to tide you over until training camp. Just how good is Earl Thomas and who will lead Seattle in receiving?

• One thing about being 56 years old. It's harder to be at your best every day. Especially on the golf course. And here. Until later ...