Sorry, but I have an important engagement this morning, so the post will be a short one. And, as befitting my status as a (semi) retired American, the engagement is on the golf course. Read on. 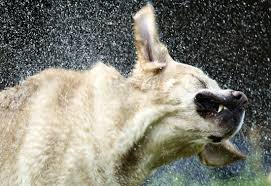 • Today is the second Monday in June. As important around here each year as any other designated day on the calendar. It is the day reserved for the Wet Dog Fur Open. The Wet Dog, as it is affectionately referred to by the members of the ever-dwindling Spokesman sports department, is an almost 30-year tradition. A four-person scramble, it is a display of some of the worst golf in the history of the game (I know, because I've have been a part of each one, ergo, some of the worst golf in the history of the game). Back in 1985, former sports editor Jeff Jordan thought up the idea of a stress-relieving tournament once the prep sports season was done and I served as his sous chef for nearly 20 years, collecting the money, making sure a T-shirt was designed, putting together teams that gave me the greatest chance to win. That role continued until current sports editor Joe Palmquist exiled me to Pullman, where, for five years, I organized an occasional one-man tournament, called The Wet Dog South. It included the most important part of the original tournament without all the distractions of, you know, actually playing golf. Over the years we've seen our share of rainy days and cold winds while slogging through the 19 holes (as this time of year can offer), but never has the WDFO been cancelled. And a day like today – mid 70s and sunny – is enough to bring out the young kid in all of us. Let's hope no one goes overboard, as the guys from the photo department – most of whom are retired or in Memphis – were wont to do in those younger days. And if you are wondering where the name came from, it was an early example of what was affectionately called citizen journalism for a few years early in this century. A reader, appreciative of our coverage of something or other, took time out of his or her busy schedule to find a crayon and write Jordan a nice letter back in '85, just before the first tournament. Included in all the "praise" of our outstanding effort covering the state championships or whatnot, was a P.S. It said something to the effect of "and oh, ya, you're sports section sucks wet dog fur." It just seemed appropriate.

• WSU: Oregon State stayed alive in the Corvallis super regional yesterday with a 12-4 victory, forcing a deciding third game today. A college World Series berth is on the line.

• Gonzaga: This might be a great place for Kelly Olynyk to land. Won't happen though. Too late in the draft.

• Mariners: You wanna know what else sucks wet dog fur? The Mariners' offense, that's what. And there is nothing affectionate about the phrase here. It is so bad Geoff Baker of the Times' only solution is to recall Dustin Ackley from Tacoma. And you know what? The M's lineup is hitting so poorly, it would help. Another outstanding pitching effort by Felix Hernandez (pictured when trainer Rick Griffin had to come out for a minor problem) was wasted – as an aside, someone should start one of those meters, like they had with Ichiro's hits back in the day, for Felix's wasted quality starts; they could bring it to the park when he throws and every time he leaves tied or behind after an excellent outing, they could click it over once more; I'm sure it would have at least a Felix-fastball number of clicks already – as the Yankees left town with a 2-1 victory. Even Eric Wedge is tired of seeing the M's struggle at the plate. He, or hitting coach Dave Hansen, may not have to watch much longer if it isn't turned around. And quickly.

• Sounders: The U.S. National Team is in Seattle for a World Cup qualifier with Panama tomorrow (something that first happened when I was in college). A couple of Sounders will probably play key roles for the U.S.

• Golf: We decided to use this weekend's U.S. Open as our poll question today – by the way, most of you who had an opinion think San Antonio will win the NBA title though the Heat won last night  – and we needed to find a story to kick it off. I found one I could laugh about. I certainly don't need Tiger Woods to win this weekend.

• OK, we're out of here. I have a list a mile long to get done before my tee time. On it are important pre-golf activities like "take Advil" and "find exploding golf ball to put on Bud Nameck's tee." Until later ...