Today was supposed to be simple. I would wait until the NCAA released its sanctions on Oregon and then rail about how unfairly the Ducks were treated. Simple. But the NCAA didn't cooperate. Read on.

• One thing became crystal clear this morning. The NCAA had it out for USC. At least it seems that way now that the NCAA has released its decision on the Oregon Ducks in what has become known as the Willie Lyles case. Though the organization found there was a failure to monitor the football program, all the NCAA did was slap the Ducks' wings. No bowl ban. The loss of a scholarship for each of two years. Three years on probation. And, oh ya, coach Chip Kelly? He has an 18-month show cause penalty, meaning if any college wanted to hire him they really couldn't. But that doesn't matter one whit. Kelly is coaching in the NFL, and more than likely will be for at least the next 18 months. So the NCAA can't really touch him. Compare the Oregon penalties with what the Trojans received in the Reggie Bush case and, if you are a USC fan, you have to be crying – or throwing things. Which makes one wonder. Was the NCAA trying to make an example of USC? Duh. Trojan athletic director Mike Garrett didn't feel USC had done anything wrong. He fought with the NCAA, treated the investigators and the Committee of Infractions with contempt and the organization didn't like it one bit. So the hammer came down. Oregon went another direction, more than likely quietly pushing Kelly out the door, apologizing for the mistakes that were made and making changes in the compliance area. And the NCAA was fine with it. Or it could be, after coming close to destroying the USC program (though the NCAA sanctions did not include forcing the Trojans to hire Lane Kiffin), the NCAA just decided its point was made. Or, after the USC and Penn State debacles, the organization may just be tired of all the crud that comes its way when it comes down hard on a school. Either way, the Ducks will shake these penalties off like Marcus Mariota shakes off a cornerback en route to a 93-yard touchdown run. 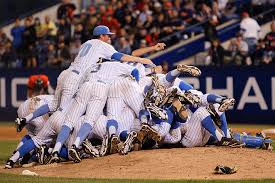 • WSU: The Cougars' recruiting seems to be hitting a different gear, as they received the seventh verbal commitment for the class of 2014. Christian Caple has more in this blog post. ... Going into last night, UCLA had won 108 NCAA team titles. None of those, however, were in baseball. That's changed as the Bruins routed Mississippi State 8-0 to win the title. ... What is the best game to watch in week two of the Pac-12's schedule? Washington State at USC.

• Gonzaga: John Stockton's autobiography comes out this fall and, if you want a sneak preview, read this.

• Indians: The four-game winning streak is toast following a 4-0 loss to the Vancouver Canadians. Chris Derrick has the information in this story and blog post.

• Golf: Manito's Corey Prugh is in good position to earn a berth in August's PGA Championship.

• Mariners: There are three main themes today. ... Joe Saunders pitched at Safeco last night and pitched like he did early in the season on the road. The M's lost to the Pirates 9-4. ... Franklin Gutierrez is back on the disabled list (now that's more surprising than, well, nothing) so the M's brought Dustin Ackley back from Tacoma. Ackley feels he's ready to be the hitter everyone thought he would be. ... Finally, Taijuan Walker (pictured) made his Tacoma debut and he was, at the very least, solid. He threw six shutout innings, giving up three hits while striking out four and walking two. ... We've made this point here before, but Larry Stone does a much better job of enumerating the Mariners' search to replace Dan Wilson. He counted up 23 tries, in fact. ... The M's leadoff situation is not good.

• Seahawks: Though the quarterback is young, the Hawks' offense is filled with veterans.

• Sounders: Coach Sigi Schmid is away from the team for a while getting a knee replaced. ... Another transfer window is about to open. ... Who is the best in the MLS? Here is one man's opinion. ... The Sounders really like July.

• That's it for today. I know a lot of you were hoping the NCAA would "USC" the Ducks today, but your hopes were not fulfilled. You'll have to deal with those hard-to-take Duck fans another year. Sorry. Until later ...