Tuesday was sort of the eye of the hurricane in Las Vegas. The WCC – and the nation's No. 1 team – had just blown through Monday night. Today the Pac-12 tourney starts pelting the town. All that happened in the basketball center of the West Coast yesterday was some bottom-rung WAC teams had their moment in the desert sun. Read on. 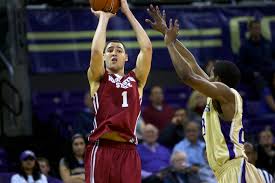 • Sometime late tonight, maybe even after I have hit the sack, the Cougars and Huskies will finish up their third game of the season. The last time these teams met in a post-season game, I was sitting behind the UW bench at a half-empty Staples Center as Klay Thompson diced through Washington to the tune of a career-high-tying 43 points. But even that great performance, coming as it did on the heels of Thompson's one-game suspension for marijuana possession, wasn't enough to overcome the Huskies, who took an 89-87 victory. What was strange about the outcome was the Cougars were the better team that season. They had proven it by winning both matchups, including an 11-point win in Seattle less than two weeks before. But the best team doesn't always win these conference tournament games. Which gives Washington State some hope heading into tonight. The Cougars are on a roll, having dispatched UCLA and USC last weekend. (Again, it's eerily reminiscent of 2011, when WSU defeated USC and came within a hair of upsetting the Bruins with Thompson watching the weekend before the tournament.) But Washington has won both of the season's meetings, including a four-point decision in Seattle 10 days ago. That win gave UW a five-game winning streak in the series, a streak that began, you guessed it, in that 2011 tournament game. Wouldn't it be fitting if it ended at the Pac-12's revamped tournament tonight?

• Gonzaga: A light day as the Zags rest and get ready for Sunday, when they'll hear their destination and opponent in the NCAA tournament. (My guess: San Jose vs. whoever wins the MEAC title this week.) But that doesn't mean Jim Meehan didn't have news yesterday, like Kelly Olynyk (pictured) named to the USBWA District IX team and Mark Few winning coach of the year honors in District IX. Plus, Jim also has this day-after blog post. So even in a quiet day we have some news. ... There will be backlash when Gonzaga earns a No. 1 seed, you can count on it.

• Washington State: Of course there is news from Las Vegas, where John Blanchette writes about the Pac-12's adventure in Sin City. Christian Caple joins in with an advance of tonight's game along with a blog post from Ken Bone's press conference and one from this morning.

• EWU: The Eastern women open pursuit of an NCAA tournament berth today in Missoula. Chris Derrick has an advance of the Eagles' (and Idaho's) conference tournament games.

• Idaho: The Vandals begin WAC play today but the tourney got underway yesterday when Seattle U. lost to Texas State.

• Chiefs: Chris was in the Arena last night as the Chiefs picked up a win, putting them all alone in fourth place in the WHL's U.S. Division. Not only can we pass along his story and blog post, but we can also direct you to Jesse Tinsley's photos as well. ... The reason the Chiefs are all alone is because Tri-City lost last night in Seattle. ... Portland, as it's done so many times this season, won once again.

• Shock: The Shock know they won't be going to the playoffs unless their defense plays better. Jim Allen has a story on Andy Olson's team, which missed the postseason last year.

• Mariners: Thank goodness wins and losses in the spring don't count. If they did, Hector Noesi would never see the mound. Wait, that would be a good thing. Noesi followed a typically strong Felix Hernandez outing yesterday with a typically weak Noesi performance. And the M's lost. ... Michael Saunders is happy to be back from the WBC. ... Jon Garland is not happy MLB banned the fake-to-third, throw-to-first pickoff move. I am. I always felt it was a balk. ... The Mariners made a little money last year. ... Brendan Ryan received off-season hitting tips from his older brother. Hey, it can't hurt. ... Josh Kinney doesn't know how he got hurt.

• Seahawks: The Harvin trade, now official, is still the main topic of conversation among Seattle football fans. And it should be. After all, by making the move, the Hawks made a statement. ... With Harvin in, Leon Washington is out. That's too bad. ... Russell Wilson made more money last year than we thought.

• Sounders: Speaking of football, international variety, the Sounders did something last night no MLS team had done: Defeating a Mexican pro team in the knockout round of the Champions tournament. All it took were three second-half goals, three more goals than Seattle has scored all season. And all three were things of beauty, earning praise over Twitter. ... The MLS has made a tiebreaker change.