The second Saturday in May doesn't seem like a traditional time to be thinking about professional football, but it is. At least it is this year. Read on. 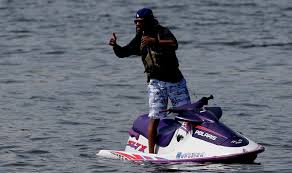 • Are you looking forward to the Seahawks' season? Are you anticipating the best year in a while? Then I'm guessing you want as much football news as possible. Well, you can scratch that itch today. The Hawks opened rookie mini-camp yesterday at their practice facility and though it wasn't the guys you'll be counting on to help the team to a Super Bowl run, it was football. In May. A hot May day, actually. So hot, Richard Sherman could watch from his jet ski. Not a bad selling point for potential free agents in the future. "Sign with us and when it comes time for rookie mini-camp, you can watch from the lake next to our practice facility. Yes, it's on a lake. And the sun is always shining in Seattle." That last sentence is how I imagine Pete Carroll selling his team, so don't hold me to it.

• Coming Sunday: It's Mother's Day and we have a treat for you, whether you're a mother or not. It's your responses to our call for stories about you mom and your sporting life. They are pretty darn good, let me tell you. So don't forget to check in tomorrow morning before brunch.

• WSU: Believe it or not, I don't have anything to pass on with a Washington State slant. Well, maybe this on the Warriors – and Klay Thompson – losing at home to the Spurs, but it is tenuous at best. And not as interesting as this light bulb story. Wow. ... Oh, wait. It is Saturday. So we can pass along the mailbag from ESPN.com's Pac-12 blog.

• Gonzaga: Remember when we passed along the stories from Michigan about a Michigan State matchup with Gonzaga in the Arena to honor Jud Heathcote? Well the game is not going to happen. Seems as if there were too many scheduling problems to overcome.

• Shock: Remember a few weeks ago when the Shock routed San Jose by intercepting quarterback Aaron Garcia (pictured) – hey, another WSU connection as he played in Pullman a couple decades ago – five times? Garcia is in the Arena tonight but with Orlando, not San Jose. He was traded to the Predators recently after former Shock quarterback Kyle Rowley – and this year's Orlando starter – was arrested on drunk driving charges. Jim Meehan has an advance that explains all the changes with the Predators.

• Preps: Now this is where all the stories are today. ... Greg Lee was at the 4A and 3A track meets at Spokane Falls Community College (pictured). ... Chris Derrick covered the regional qualifying 4A softball game at Whitworth where the Mead Panthers used their bench to their advantage in a 4-3 win. ... Steve Christilaw has a roundup of all the tennis playoff action. ... Jim Meehan chips in with his weekly golf notebook. ... To cap it all off, we can also pass along this roundup of all the other local playoff action, from track to tennis.

• Golf: Missed this early but wanted to pass along Jim Meehan's weekly golf column. Jim examines the changes at Chambers Bay as the course prepares for the U.S. Open in a couple years.

• Mariners: The A's are in an umpire-assisted free fall and the M's had a seemingly healthy Hisashi Iwakuma on the mound. As you might expect, those two facts combined to help the Mariners win again, this time 6-3 over the reeling A's, who have lost five consecutive games. The biggest news, however, is that Raul Ibanez backed up his big talk from Thursday with a three-run home run, supplying the margin of victory. ... Franklin Gutierrez will be back "some time." But for how long? ... What's up with Jesus Montero?

• Seahawks: It was not only the weather that stood out yesterday. So did fifth-round draft pick Luke Willson, a tight end from Rice. As almost 70 rookies and free agent tryouts showed Carroll what they can offer, he responded with his usual upbeat assessment. At a lot of places, that type of talk is just talk. But with the Hawks, there is always a chance a low draft pick or a free agent could make the team and contribute.

• Sounders: The Sounders are hosting San Jose today – a couple of Grippis will be in attendance, though not me – in an afternoon contest at CenturyLink Field and it should be good. But recently it's been one-sided as well, with the Earthquakes having won four consecutive games in the series. Both teams have been hit hard with injuries and recent suspensions.

• Sonics: "The NBA is saying no? Then I'll just offer the Maloofs another $75 million for their team. Let's see the league turn that down." That's what I imagine went through Chris Hansen's mind last week.

• Unless someone offers me another $75 million to write somewhere else – and believe me, I would accept in less time than it takes to say "David Stern" – I will be here again tomorrow. And we'll have our Mother's Day treat. Until then ...