I'm pretty sure it was Yogi Berra who said, "it ain't over until it's over." Or something akin to that. Whatever. That saying has a double meaning today. Read on.

• The first meaning is baseball-related and has to do with the Yankees. Which is appropriate as it concerns the M's loss to New York last night (and Yogi was the quintessential Yankee back in the day). The M's built a 3-0 lead and Felix was on the mound. But it didn't feel safe, not in Yankee Stadium. After all, it ain't over until it's over in that place, as many a visiting team has discovered. First Felix tweaked his back and had to leave the game. Then Charlie Furbush's strike zone was tweaked by plate umpire Jerry Layne, a pretty common occurrence in New York (though Layne's obstruction call on Felix earlier in the game was a unique way to homer the road team). By the time the bottom of the seventh inning was over the Yankees led 4-3 and the M's hopes of winning were over.

• The other meaning relates to the NBA Board of Governor's meeting today in Dallas. Though everyone thought Chris Hansen's chances of buying the Sacramento Kings were over a while ago when the league's relocation committee voted unanimously to discourage the move, it ain't over. And may not be over today. Hansen tried to move the bar some in the past 10 days, first offering more money for the team and then coming up with a contingency plan should the sale not be approved. Disinterested observers – and they aren't very many of those ­– see Hansen's moves as tweaking the NBA owners' interest, but they may not be enough to tilt the field in Seattle's favor. However, the moves may have done one thing. They may force the league to postpone a decision – again – and prove Yogi right once more.

• WSU: It seems like a good day to look forward, what with ESPN.com's Pac-12 blog listing all the verbal commits each conference school has in football recruiting and Jon Wilner taking a stab at next year's all-conference team.

• Gonzaga: The Bulldogs had a golden opportunity to burnish their at-large credentials with a win at No. 10 Oregon yesterday but couldn't get a big late-inning hit and fell 4-3 when the Ducks scored in the bottom of the ninth. The teams meet again today.

• EWU: Weber State has buffed up its football schedules down the road.

• Preps: It's the middle of spring playoff season, with Jim Meehan covering the final day of the GSL golf districts (Jim also covered Idaho golf on Monday and I missed the story in yesterday's paper). We also can pass along a roundup of Idaho's state golf tournaments. ... Jim Allen has an advance of today's soccer matchups. ... Chris Derrick was at the 3A regionals at Whitworth and has this story. ... We also can pass along this baseball roundup. 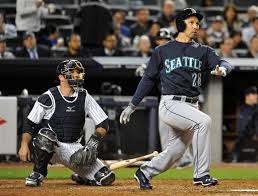 • Mariners: Just what the M's needed. Felix getting hurt. Well, not hurt exactly, but he tweaked his back enough to leave the game maybe an inning early. And that inning turned out to be the decider in New York's 4-3 win. ... Larry Stone makes a compelling argument the M's have a National League lineup. Only instead of the pitcher hitting it is their shortstops. ... Jason Bay and Raul Ibanez returned to New York. In Ibanez's case, he made Eric Wedge look like a freaking genius for putting him in the lineup, hitting a two-run dinger (pictured) off C.C. Sabathia. ... This is a big roadtrip for the M's. ... Only in New York does a topper out in front of the plate that results in a force out become the lead of a game story.

• Sonics: If I were a betting man, I would bet the NBA will put off the decision a bit longer today. But what do I know? What does anyone know? I can tell you there are groups in Sacramento suing (and other things) to stop the arena project, but that shouldn't derail the city's bid to keep the team. And I can tell you there are people in Seattle that believe this might be the city's last chance to get back in the NBA game.

• OK, it's over. Today's blog post, I mean. It brings to mind another of Yogi's sayings. "No one goes there anymore. It's too crowded." Until later ...

Posted May 15, 2013, 7:56 a.m.
By Vince Grippi
vincegrippi55@yahoo.com
Vince Grippi is a freelance local sports blogger for spokesman.com. He also contributes to the SportsLink Blog.