Three-run home runs are cool, sure, and oftentimes can be crucial to winning a baseball game. But catching a short flip from the first baseman very well may be more important. Read on. 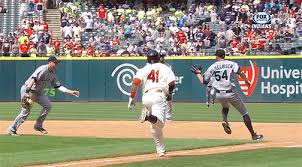 • At least it was yesterday for our regional major league baseball team. But before we go into the drop that cost the M's another game in Cleveland, we want to share some thoughts honed over years of being involved with baseball. There's an old cliché about the 162-game major league season. More than one actually, but we are concerned with just one. The premise is every team will win a third of its games no matter what and every team will lose a third of its games, so pennants are decided by the other third. As clichés go, this one is pretty accurate. And stupid. Sure, rarely does a big league team lose more than two-thirds of its games – or win more than that, actually. But the reasons they lose or win those two-thirds are the same as why they lose or win the other third. It's not like the outcomes are predetermined in two of every three games. Many elements affect the outcome. Sure, to win consistently in the big leagues, all the big things are important. Pitching, defense, hitting, hitting with power, an occasional lucky bounce, all of those. We concede that. But there are not the be-all and end-all for championship contenders. Oftentimes what separate the haves from the have-nots are simple little things. A good example occurred yesterday in the M's 10-8 loss to the Indians. It was the top of the seventh and the game was tied at 5. Brendan Ryan led off the inning with a single to right. Now I understand the stat folks' aversion to sacrifice bunting, but there are times when it is called for, like in this situation. Mainly because the M's needed a run and because Michael Saunders – a struggling Michael Saunders – was in the batter's box. Move the runner over, give Jason Bay and Kyle Seager a chance to drive him in. Simple. Except Saunders popped up the bunt and failed to move Ryan into scoring position. He couldn't execute a little thing. Produce a productive out. With the bunt failing, manager Eric Wedge decided to send Ryan – it might have been a hit-and-run but not knowing the M's signs, I can't say for sure – in the hopes of accomplishing the same goal, get the go-ahead run in scoring position. But Bay swung through the ball and Ryan was thrown out. A promising inning shot to hell. Now, no one knows what would have happened if Saunders had gotten the bunt down. But we can say with some certainty a runner in scoring position puts more pressure on the defense than one at first base. And pressure, if applied consistently, can lead to breakdowns. As it did for the M's in the bottom of the ninth. Leading 7-6, Tom Wilhelmsen pitched himself into a bit of a jam, with Cleveland putting runners on first and third with two outs. Any mistake and it's a tie game. Pressure. And Wilhelmsen buckled. Carlos Santana stroked a ground ball that seemed headed to right field, Justin Smoak dove, came up with it and flipped to Wilhelmsen covering (pictured). It was the epitome of a little thing, catch the ball, touch first and the game is over. Pitchers and first basemen do it all the time in PFPs, practicing the fundamental until they can do it in their sleep. Except Wilhelmsen couldn't, not this time. He dropped the toss. The Indians went on to win an inning later. And that's how not-so-good teams lose that third of their games. Or two-thirds, however you want to look at it. 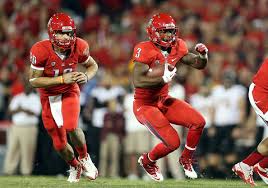 • WSU: A few things of note around the Pac-12, including Daniel Jenkins (pictured with ball) explaining why he decided to stay at Arizona instead of transferring to WSU. ... Christian Caple ran down the story behind Logan Mayes' hit-and-run citation. ... Larry Scott makes a lot of money. More than any other conference commissioner. ... The Pac-12's bowls may be changing. The conference's revenues certainly are.

• Shock: This doesn't really affect our local Arena League team, but it is interesting. A San Jose assistant coach spent some time in jail after a postgame incident in Florida, where it is a felony to manhandle a senior citizen. In nine more years, I'll have to move there for my own protection.

• Preps: The state golf tournaments tee off today. Jim Meehan has an advance.

• Mariners: We gave you some of the particulars of the M's fourth consecutive loss in Cleveland yesterday, but there was more to it, of course. The short synopsis: The Indians hit Hishashi Iwakuma pretty well, the Mariners bats came alive, the M's took leads in the top of the ninth and 10th and couldn't hold them. Thus they were swept. ... Will the lost weekend in Cleveland have ramifications down the road? ... Kelly Shoppach used to be an Indian. ... When a manager makes out a lineup, he's aware of a lot of things, including how players hit with runners in scoring position. 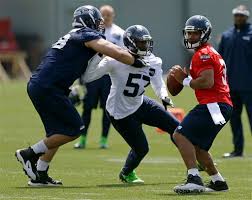 • Seahawks: Pete Carroll spent part of his day Monday lamenting the Hawks' troubles with the NFL police. He says he's not happy about it and it could cost the Seahawks money down the road. ... Another Hawk is in trouble and it's with the real police. ... OTAs started yesterday and Marshawn Lynch decided not to participate. Russell Wilson (pictured in red jersey) was there, though, and better than ever. ... The team made some roster moves.

• Sonics: Chris Hansen says he's not giving up on the NBA.

• That's it for this morning. I'm sore today. Sore in body, because my back and legs hurt after cleaning the house yesterday, and sore in attitude, because there is still more to do and the day is going to be gorgeous. It's not fair. Until later ...

Posted May 21, 2013, 8:25 a.m.
By Vince Grippi
vincegrippi55@yahoo.com
Vince Grippi is a freelance local sports blogger for spokesman.com. He also contributes to the SportsLink Blog.