Want to know when it is going to rain? Just check with me. If I've scheduled a golf outing, it will rain. Been perfect 100 percent of the time this spring. I'm beginning to think the big guy upstairs doesn't like me. Read on. 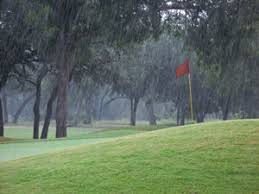 • Here's my evidence: The golf and weather problem. A recent string of losing lottery tickets. The mirror. Re-occurring car trouble. The Mariners. Yep, add it up and I've got to believe there's a bit of Job-like discussion going on somewhere with me as the foil. Like a lot of folks around here, I got my hopes up a while back about the Sonics returning. Shot down in flames. Then the M's started playing better. Boom, heartbreak in Cleveland and last night – don't get me going about last night. I thought maybe the Seahawks would be the exception. Instead they proved the rule, what with the utter disdain they have been showing the league's PED rules. It's getting so bad I am constantly checking for boils, locusts and lightning strikes. Though, as I think about it, that's a bit Old Testament. Retribution 2.0 seems to have taken a hip, new look. Wrath seems to be centered round our sports teams, from the Cougars to the Mariners. Even when winning seems ordained – remember when Gonzaga was ranked No. 1 in the nation? – failure seems to be just around the corner. Maybe I'll start advertising in the New York Post that I'm thinking of becoming a Yankee fan. Solicit donations to root for the Red Sox instead. Show my recent track record, prove the big guy is out to get me. That should bring in enough cash to buy an umbrella. You know, for my next golf outing.

• WSU: Christian Caple passed along the news last evening Shadle Park High's Jake Rodgers (and, I presume, his mullet) has left Washington State's football team. ... Want to know who has the worst bye week schedule in the Pac-12 North? It just may be Washington State.

• Preps: As the high school sports season winds up this weekend, track and field take center stage. Greg Lee begins with this advance of the small schools' meet. ... The state golf tournaments began yesterday with Spokane athletes in the running for state titles. ... Steve Christilaw chips in with an advance of the state tennis, which is also this weekend.

• Seahawks: But both sports hate it when reserves screw up and get cited for a DUI. It can cost a guy a job. ... No doubt about it. The Hawks are now Russell Wilson's team. ... The Seahawks are not shy aboutspending for backups. ... Super Bowl L is headed to the Bay Area. Old person alert: I remember Super Bowl I, when it wasn't even called a Super Bowl.

• Mariners: The losses in Cleveland hurt in a "wow-we-could-have-won-every-game" way. Last night's 12-0 blowout in Anaheim hurts in a "we-had-no-chance-not-with-Aaron-Harang-pitching" way. The Angels, who are starting to heat up, took batting practice off Harang and the M's staff, which leads to a bunch of soul searching in the Seattle media today. Is it time to make changes, both in the pitching staff and in the everyday lineup? Some folks think it is. Now the big question is, do the M's? ... Endy Chavez is no stranger to late-inning heroics. ... Mike Trout (you know, the guy the M's passed on to take Dustin Ackley – I realize that's a cheap shot and I apologize) hit for the cycle yesterday, becoming the youngest player since Mel Ott in 1929 to do it. ... As a hitter, strikeouts are not a good thing. ... Loved this blog post from Larry Stone. There is a difference in how PEDs are perceived between baseball and football.

• Sounders: Though the Sounders are playing better and better, national team call ups could hurt them over the next month. The latest is midfielder Brad Evans.

• That's it for this rainy, cold May morning. By the way, if you want to play golf anytime in the next couple weeks, you're probably good. I am going to be on the radio for an extended stretch starting Thursday, so golf is out of the equation for a while. You're welcome. Until later ...

Posted May 22, 2013, 7:45 a.m.
By Vince Grippi
vincegrippi55@yahoo.com
Vince Grippi is a freelance local sports blogger for spokesman.com. He also contributes to the SportsLink Blog.