Social media is an interesting beast. Sometimes it can bear sharp teeth, ripping into, say, Sergio Garcia, after his ill-advised comments about Tiger Woods and a dinner entrée. And other times it can be a beauty, as it was yesterday when the Chicago Bears' Brian Urlacher announced his retirement from football. Read on. 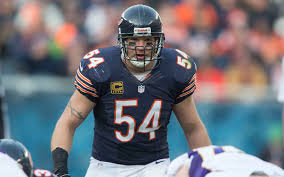 • I find Twitter an invaluable resource for this job. By following a multitude of sports writers, broadcasters and the like, I keep up-to-date on breaking news and the day-to-day minutia of modern sports. But there is a downside to instant person-to-the-world communication. When something odd happens – a bad play, an idiotic statement, a loss in a winnable game – Twitter tends to overload with inanity. It's that side of Twitter that people cite when condemning the medium, and rightfully so. But there is another side to Twitter and it surfaced yesterday. It happened when Brian Urlacher, the longtime Chicago Bears' middle linebacker, announced his retirement. All of a sudden my timeline exploded. Not with people bitching about what the Bears had done to Urlacher (they sort of forced the 34-year-old out the door) or any other negative response. Nope, it exploded with people praising Urlacher and what he represented. And the best part of it? It was mainly from his peers. See, I follow a couple of former Washington State players who are in the NFL and they retweeted comments from other NFL players. The main thrust of the tweets: Urlacher was a player who played the game the "right" way, with his heart, his mind and his body. Guys like the Seahawks' Earl Thomas saying they considered it "an honor" to have competed against Urlacher. Teammates praising him as a mentor and leader. Opponents acknowledging how tough he was. A public display of affection even your old high school gym teacher could approve of. It was a great way to send out a football player who epitomized toughness, a trait still greatly admired in a sport that demands it. It was Twitter at its best.

• WSU: Christian Caple reported the news yesterday concerning the assault on the Cougars' Mansel Simmons and the Pullman police recommending assault charges against a UI player, Roman Runner. Christian filed a blog post and this story on the day's events. ... Adam Lewis summarizes the recent scrapes with the law on SportspressNW. ... The Pac-12 bowls have been scheduled for this year. ... The NCAA's beef with Oregon is coming to light.

• Gonzaga: The Zags  and pitcher Marco Gonzales (pictured) are in Stockton for the WCC baseball tournament this weekend. The winner – GU won the regular-season title – earns an NCAA berth. Christian has the story in his weekly baseball notebook. ... The GU women, along with the Idaho women, will play in this fall's WNIT preseason tournament. ... BYU had a good experience this season with a returning missionary.

• EWU: Because Eastern is playing at Oregon State this season, the Corvallis paper took a look at the Eagles.

• Preps: Lots of high school news, with Lewis and Clark's Sierra Kersten winning the state 4A girls' golf title and Mount Spokane's Sierra Bezdicek finishing second in the 3A. ... Other sports begin today, with U-Hi looking for another softball title (Chris Derrick has an interesting feature on coach Jon Schuh and his daughter Karly), Cheney trying for a soccer crown (Jim Allen has this advance) and many schools involved in the state track meet (Greg Lee also has an advance).

• Chiefs: Portland wins another Memorial Cup game, moves along in the tournament.

• Mariners: Another great thing about Twitter. I found out about Jesus Montero being sent to Tacoma today from it via Ryan Divish. ... Of course, when the M's play as poorly as they did yesterday – an uninspired 7-1 loss to the Angels despite a reshuffled lineup once again – then Twitter is filled with folks bitching. Sometimes I'm one of them. ... The Montero move may just be the first in a series of changes the M's make – and need. ... Part of the lineup change yesterday was Jason Bay batting leadoff again. ... After the loss, the veterans convened a team meeting. 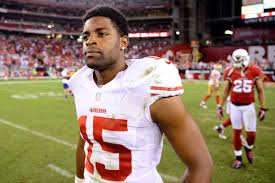 • Seahawks: The other big football news yesterday, besides Urlacher's retirement, was the Achilles' tendon injury suffered by the 49ers Michael Crabtree (pictured). ... The Hawks drafted themselves one athletic defensive lineman. ... Marshawn Lynch's court date in California was moved back to July. ... Does such news bug you?

• Sounders: Travel is a crucial element of professional soccer and getting a team of players to a certain destination on short notice is not easy. Don Ruiz has a real interesting story on how the Sounders get it done. ... Though the next Sounders game is in Los Angeles, some folks are already looking forward to their U.S. Open Cup game next week – and beyond.

• We're back on the radio today for the first time in a long time, joining Rick Lukens and Tom Giles on 700 ESPN at 3 p.m. You can listen here if you like. We'll be doing a pretty long stint – until early June – filling in. Vacation season is beginning. Until later ...

Posted May 23, 2013, 8:19 a.m.
By Vince Grippi
vincegrippi55@yahoo.com
Vince Grippi is a freelance local sports blogger for spokesman.com. He also contributes to the SportsLink Blog.