It is hard to be labeled. No matter what that label is. But for a professional athlete, one of the hardest labels to live up to is potential. The word may have claimed another casualty yesterday. Read on. 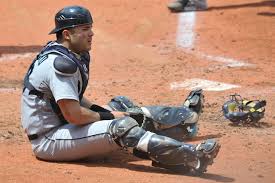 • Jesus Montero always had the potential to be a major league star. It surfaced early when he was in the Yankee organization. It was stuck to him when he was part of the trade that sent Seattle's Michael Pineda – another player with unlimited potential – to New York. It was brought up nearly every day last year as Montero struggled to acclimate himself in the major leagues as an everyday catcher. And it began to be accompanied by the word "unrealized" as this, his second season, began to go sour. Something had to be done. The label needed to be torn off. So the M's tried to perform a labelectomy yesterday, sending Montero down to Triple A Tacoma and letting it be known Montero's days as a catcher are over. Montero will be giving another type of mitt, one you use at first base, for an occasional look, but will be penciled in the Tacoma lineup often as a designated hitter. The hope is he has the potential to become another Edgar Martinez, or a reasonable facsimile. But right now the Mariners really hope Montero will settle down and then settle in as a big league hitter, free of the pressure of trying to learn how to be a passable defensive catcher at the major league level. The potential is still there in a sense, as he does have a bat with pop. But anyone with a modicum of catching knowledge could see last year there was little in the way of potential Montero could become a decent catcher. He was too stiff and not nearly athletic enough to perform the tasks needed at a high enough level. Those same deficiencies have the potential to limit his ability to be a first baseman – it's a tougher position than it looks. Which leaves designated hitter. Because Montero was part of a high-profile trade, he'll be given every opportunity to reach his potential at that spot, more than likely filling the role day-after-day for the Rainiers. And if the M's season takes a nosedive and decisions are made to make a free deadline trades for the future? Then Montero may just be back in Seattle filling the designated hitter role as the M's once again build for "next year." At least the potential is there.

• WSU: The Cougars depth on the offensive line is taking a hit, with Shadle Park High graduate Jake Rodgers (pictured) leaving the team. Christian Caple caught up with Rodgers yesterday and that led to this blog post and a story. ... One man's opinion on the football race. ... Every team has rough stretches in their schedule. The ESPN.com Pac-12 blog picks its choices for each of the conference's North division teams.

• Gonzaga: The WCC regular season baseball championship amounted to exactly zilch. At least as far as the WCC tournament is concerned. The Zags struggled in the opener and fell to USF, meaning they'll have to win three consecutive games if they hope to earn an NCAA berth.

• EWU: Bo Levi Mitchell was back in Cheney recently and he worked out with the Eagles (his brother is a wide receiver for Eastern). Jim Allen had a chance to talk with the former EWU quarterback and that led to this story.

• Preps: And so it begins. The last weekend of high school sports this school year. ... Greg Lee was in Tacoma for the big schools track meet and chronicled the local runners wins in the 1,600. ... Central Valley will be in Spokane trying to win the State 4A softball title. Chris Derrick has an advance of the tournament that begins today at the Merkel Sports Complex.

• Shock: Spokane is on the road in San Antonio tonight needed a win to build off last week's losing-streak stopper over New Orleans. Jim Meehan has an advance of tonight's game.

• Mariners: As we talked about in our lead-in, Montero is headed to Tacoma. That means the Mariners must make a move on their 40-man roster. That shoe should drop today. ... No one in Seattle seems too surprised by the Montero move, or too overly upset by it.

• Sounders: Seattle GM Adrian Hanauer had time this week to chat about a variety of issues with reporters.

• Another day on the radio today, as we will be joining Rick Lukens and Tom Giles on 700 ESPN at 3 p.m. for a two-hour show. You can listen here. Until then ...

Posted May 24, 2013, 6:20 a.m.
By Vince Grippi
vincegrippi55@yahoo.com
Vince Grippi is a freelance local sports blogger for spokesman.com. He also contributes to the SportsLink Blog.