An unimportant play in a completely forgettable season. That's what traditionalists – or apologists – might say about another obviously blown call in the Mariners' loss to the Texas Rangers. But there is another view, even if baseball may have trouble seeing it. Read on.

• It is the seventh game of the World Series. The New York Yankees have runners on first and second with no one out. There is a ground ball to first. The throw is made to second for the force and the return throw is made to first in time. Except the pitcher, in front of the bag, accidentally intercepts the ball from the first baseman, who is stretching for it. No worries. First base umpire Jeff Nelson, who has worked two previous World Series (so he has to be good), calls the runner out. Joe Girardi comes out to argue, but to no avail. None of the other umpires chime in to help because, after all, it's not their call. Up in the press box and in homes all around America people can see the pitcher caught the ball and the runner was safe. It is replayed over and over. The on-field argument ends, the Yankees big inning is thwarted and the Miami Marlins go on to win another World Series. And the baseball world explodes. If you think that scenario is far-fetched, and not just because the Marlins will never win another World Series, think again. The exact play happened last night in Seattle. Jesus Sucre, in his major league debut, hit a ground ball to Mitch Moreland at first base. After a force at second, the return throw was snagged by Texas pitcher Justin Grimm, who was not on the bag. Yet, Nelson called Sucre out. Another obviously wrong call may have turned the outcome of another game. (By the way, don't take my word for it. The Rangers involved in the play admitted it happened.) Big deal, you say? It is only May 24 and it is only a regular season game between one team headed to the postseason (Texas) and another who isn't (you know). But yes it is. Let's not even get into what one game might mean in the standings in a few months – after all, who really knows if the call changed the outcome. But what about the integrity, and reputation, of the game? This is, by my count, the third obviously blown call in the past month that could have been corrected quickly with a replay review. A review that would have saved baseball embarrassment. Sure, it happened in Seattle and only a few folks care, but if it can happen there, it could happen in my scenario above. So why wait? Why not, to use a 2007 phrase, be proactive and make the leap other sports – football, basketball, tennis, even golf – have made and utilize technology to improve your officiating? Who knows? Maybe baseball believes in the theory even bad publicity is good. Or maybe the owners are too cheap to spend the money. Or maybe the umpires' union is too powerful for changes to occur. All I know is when an umpire can't even see who caught a ball but still call a guy out, then it is time for something to change. 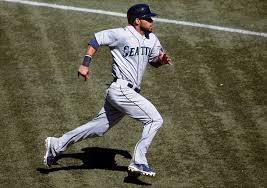 • Speaking of bizarre, that's a perfect word for what happened concerning the M's roster changes. We won't go into depth here, but we do have some links below that explain how the Mariners finally ended up clearing space on their 40-man roster for new catcher Sucre and designating Robert Andino (pictured)  – by the way, if the M's past has taught us anything, he'll end up having an All-Star-caliber year at his next stop – for assignment, meaning his short-lived Seattle stint is over. The whole thing reeks of mismanagement, but who could use that term in relation to the M's front office? Oh, right. Everyone.

• WSU: Though the Cougar news is somewhat thin, we did find some Pac-12 items to pass along. But before we get there, the WSU baseball team, down 7-0 early at No. 3 Oregon State, rallied for an extra-inning victory. Might be the highlight of a pretty disappointing season. ... It's Saturday morning, so we pass along the weekly ESPN.com Pac-12 blog mailbag. ... Cal's new coordinators have hit the jackpot. ... News and notes from around the conference.

• Golf: Think you can hit the ball a long way? (My answer would be, "no, no I don't.") You can prove it. Jim Meehan tells you how in his weekly golf column.

• Preps: We will begin with track and field as Greg Lee has coverage of the boys (pictured) and the girls at the big school meet in Tacoma while John Blanchette and Jim Allen divided up the 1A/1B/2B meet at Eastern Washington. John covered the boys and Jim had the girls' meet. ... Though Central Valley's state title hopes are over, the Bears are still hoping for a 4A softball trophy. Chris Derrick has the story. ... U-Hi is still in the running for the 3A softball title. The Titans will meet longtime Vancouver-area rival Prairie in the semifinals. ... Rain caused problems at the 2A softball tournament. ... Cheney is back in the 2A boys soccer final. ... Finally, a few local tennis players are still battling for state titles.

• Chiefs: Portland earned a trip to its first Memorial Cup final since 1998 with a 2-1 semifinal win over the London Knights.

• Shock: The Shock seems to love playing on the road. They proved that again last night with a 61-48 win over San Antonio in Texas. Jim Meehan put together a blog post and a story on the game.

• Mariners: Joe Saunders wasn't Safeco Joe last night, which means he wasn't near-perfect at home as he has been all year. Still, the M's had chances in their 9-5 loss to Texas which stretched Seattle's losing streak to seven games. ... We teased this above, but we have a whole bunch of blog posts from Friday that tried to follow the saga of the M's roster moves. It got kind of strange there for a while. Suffice to say, blame social media for the problems. That seems to be the modern way. ... Sucre was in the lineup yesterday but Carlos Triunfel (pictured) was not. ... The M's pitching questions have few answers. ... Though he didn't cover the game, Tacoma's Ryan Divish held a live chat yesterday.

• Seahawks: Another day, another Achilles tendon tear. However, this one happened to the Hawks' tight end, Anthony McCoy. Don't expect him back next season. ... NFL fans seem to be in the Seahawks' corner.

• Sounders: All the roster changes that occur during the MLS season makes it tough on a coach to put together a consistent lineup.

Posted May 25, 2013, 6:52 a.m.
By Vince Grippi
vincegrippi55@yahoo.com
Vince Grippi is a freelance local sports blogger for spokesman.com. He also contributes to the SportsLink Blog.