Of all the holidays we celebrate each year, this is the one where the words "happy" or "merry" just don't fit as an adjective. Memorial Day is just that, a day for memories. Memories of those who gave their last full measure, to quote Abraham Lincoln once again, for our freedom. It's a day to reflect, a day to remember, a day to be thankful. Read on. 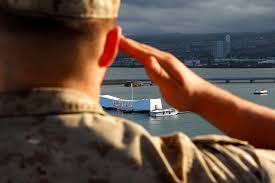 • It seems entirely appropriate our two most reflective national holidays – Memorial Day and Thanksgiving – have their roots in the Civil War (as does the Lincoln quote I like to cite on this day). That bloody conflict that split this country apart and cost more American their lives than any war should never be forgotten. Neither should the reasons we celebrate days like today. My father had his reasons, having lost too many friends and colleagues during World War II. The effect such things had on his life didn't really hit me until he was in his 70s and, after years of lying to me (and to everyone else) about the death of his captain, a man he greatly admired, during the war, he sat down and told me the truth. It's not a story I want to share at this time but I can say this, the death ate at him his entire life. It happened on his birthday on Guam, an island in the South Pacific, and when he finally shared the truth with me, his only son, he cried like a baby. It was one of only two times in my life I saw my father cry. Just thinking of that day makes me tear up even now. So on this Memorial Day I am going to remember my dad, who gave up some of the best years of his life – and many of his dreams – for you, me and this country. His naval service in World War II affected him deeply, more than I'm sure I know even today. I'm going to take some time to think of my dad, who died a couple years ago, and Captain Cunningham, who died on my dad's birthday so long ago, and give thanks. It's what this day is all about.

• WSU: OK, some sports news. The Cougars couldn't hold on two a two-run lead in their season-ending game at Oregon State and lost 7-6 to the Beavers, who will host an NCAA Regional.

• Preps: I was mistaken yesterday. There were local teams whose state title games were postponed until Sunday, including Colton, who won the 1B softball title again, and Northwest Christian, who lost in the 2B title game.

• Chiefs: The Portland Winterhawks, carrying the banner of the WHL, fell just short in the Memorial Cup, losing to Halifax 6-4. 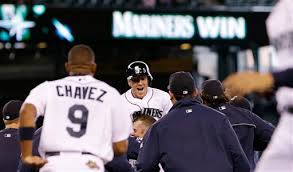 • Mariners: Our long regional nightmare is over. Wait, haven't I written those exact words before? Yes, yes I have. So let's amend them. Our long regional nightmare is over this time. The M's eight-game losing streak is a thing of the past thanks to Hisashi Iwakuma's outstanding pitching and a Jason Bay 13th-inning broken-bat dunker to left. Thus Texas leaves Seattle on a one-game losing streak. As Geoff Baker kept tweeting throughout extra innings, with each out the psychological importance of the M's having to win kept growing. As the game wore on, a loss would have been more and more devastating. No matter. They won. And will host San Diego today. ... Justin Smoak will be out for a while with an injury.

• Sounders: Every once in a while a professional team – heck, every team – just plays crappy. It was the Sounders turn last night. They played awful in the first half, gave up four goals and lost 4-0 at the L.A. Galaxy. And their coach wasn't pleased. Though the Galaxy players were. ... The final score will be forgotten someday but a late appearance by Robbie Rogers will be remembered by some forever.

• Auto racing: Can't skip the Indianapolis 500, won by Tony Kanaan. Kanaan got to kiss the bricks and drink the milk for the first time.

• That's it for today's post. You know, I originally intended to share my dad's story here today, but I just can't. Not yet. Every time I recall him telling me, I have trouble typing. Maybe some day. Until later ...

Posted May 27, 2013, 8:12 a.m.
By Vince Grippi
vincegrippi55@yahoo.com
Vince Grippi is a freelance local sports blogger for spokesman.com. He also contributes to the SportsLink Blog.