Sometimes I have this vision of myself as a gold miner in California, circa 1850. A crusty old guy with a filthy hat, overalls, a bad limp and a pie plate from Marie Calendar's. Bent over the waters of the Internet, I picking up a bunch a mud, swirl the plate over and over again and, Eureka, a couple of nuggets appear in the bottom. Read on. 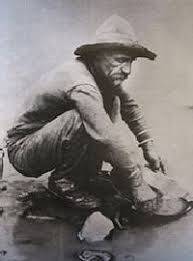 • The mud in this analogy belongs to our regional major league baseball team, of course. The gold? It can come from many sources though, like what happened for a lot of the prospectors oh so long ago, it doesn't show up every day. And sometimes there are no nuggets, just flakes. Speaking of flakes, I have to link this column from Salt Lake City. Don't get me wrong, the writer is not a flake. It's the subjects of his column. I'll pause here a second while you read it. OK, you done? Now I will concede there is a good chance the column isn't covering the whole story. But just the idea of people suing because their offspring was cut from a high school sports team, now that's flaky. What happened to learning lessons from failure? Michael Jordan talks often of being cut from the varsity as a high school sophomore – he played on the junior varsity – and how it motivated him the rest of his life. Why didn't his parents just sue? I remember being cut from the freshman basketball team in high school. It was the best thing that ever happened to me, though I sure didn't think so that Saturday when it happened. See, basketball and baseball overlapped by about a week in the spring. If I had made the basketball team, the 5-foot-2 version of myself (I was probably a bit shorter than that as a freshman, but you get the picture) probably wouldn't have made the junior varsity baseball team. I needed that first week, without the guys from the basketball team, to impress the JV baseball coach. If I had turned out a week later, when things got hectic and players were given less than a complete look, my skills (hustle, baseball acumen, the ability to kiss up) probably wouldn't have been recognized. If I hadn't made the team as a freshman, I may have given up baseball. And the fact I grew about 8 inches between the beginning of my sophomore baseball season and my junior one, going from a twerp who barely could hit the ball out of the infield to a twerp who could at least get the ball to the outfield grass, would have all been for naught. Even as dense as I was back then I realized getting cut in hoops was the best thing that ever happened for me, athletically. It hurt, sure. But many of the things that make one stronger hurt. Does that lesson it takes a long time to learn? Sure, often it does. So sue me.

• WSU: Christian Caple is keeping up with Washington State's football recruiting and has a blog post today on another commit for the next signing class. ... We found this piece yesterday on CBSSports.com. It seems one CBS writer really believes in Marquess Wilson. ... The Pac-12 will announce some of its early season football television schedule this week. ...  I guess we could have put all these links in an Idaho section, as Mike Bohn was the Vandals' athletic director at the turn of the century. But as his last job was in the Pac-12 at Colorado, we insert them here. The news: He was forced out in Boulder.

• Preps: The annual Jack Blair girls' basketball all-star game is tonight and this year will feature players from state champs in Idaho and Washington. Greg Lee has an advance of the game.

• Mariners: Was last night the final big league start for Brandon Maurer (pictured) for a while? The rookie righthander struggled against the Padres as the M's lost 6-1. And there is the matter of Jeremy Bonderman and his contract stipulation he has to be in the major leagues by June 1 or he's a free agent. We'll see if something happens later this week. ... Larry Stone weighs in on the potholes encountered by the M's recently with their rebuilding plan. ... Nick Franklin, who wouldn't be in the bigs if not for said potholes, started at second base last night. It was his first major league start. FYI, he made an error. ... Mike Morse strained his right quad and had to leave the game. He, like Justin Smoak, is day-to-day. There is a bit of a strain on the roster right now. ... Jason Bay is being used sparingly and rightfully so.

• Seahawks: Marshawn Lynch showed up at OTAs yesterday, so that's good. Meanwhile, the vets got together and talked about the Hawks' recent problems with PEDs. ... The Hawks waived/injured (it's an NFL term) Anthony McCoy yesterday, looking to be able to put the backup tight end on the injured reserve list now and save a roster spot. ... The NFL switched the dates of next year's draft.

• Sounders: After suffering their worst MLS defeat in a while, the Sounders hit the road to open U.S. Open Cup play tonight against a familiar team, the Tampa Bay Rowdies. The franchise isn't what it used to be, however. ... This week's MLS power rankings.

• Sonics: Chris Hansen is not giving up his dream to bring the NBA back to Seattle.

Posted May 29, 2013, 8:14 a.m.
By Vince Grippi
vincegrippi55@yahoo.com
Vince Grippi is a freelance local sports blogger for spokesman.com. He also contributes to the SportsLink Blog.