Sometimes you can see a storm brewing from miles away. Other times it hits you before you have time to run for cover. The latest brouhaha in Seattle? It was visible from here. Read on. 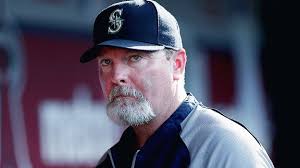 • When the Mariners decided to send Dustin Ackley to Tacoma a couple days ago, it seemed to be just another glitch in their rebuilding program. And it should have stayed that way. But nothing ever seems that simple with our regional major league team. As I was reading the news Tuesday afternoon, I came upon a couple of comments from manager Eric Wedge (pictured) and immediately knew we had elevated from glitch to full-blown crash. Wedge was trying to explain Ackley's fall from grace and mentioned sabermetrics, calling those who crunch numbers and statistics to pontificate on the right way to run a baseball team "people who haven't played since they were 9 years old and think they've got it figured out." Oh oh. We talked about it quite a bit Tuesday on the radio show and I made it clear I felt Wedge was going to hear about this. The folks he was criticizing are pretty entrenched in the baseball media and they wouldn't be happy. They would want his head. I was right. They weren't. And Wedge heard about it, with one ESPN columnist saying it was time for him to go. Not for the comments, though David Schoenfield brought those up, but for the Mariners inability to develop talent. That's an illogical argument based on a flawed premise (players are listed as top prospects so they are destined to be great major league players) that doesn't deserve discussion (even if the premise was accurate, the blame isn't all Wedge's; the front office has to shoulder most of it). But the tempest that occurred in baseball's teapot is worth discussing. Wedge was person-non-grata throughout the sabermetrics world yesterday, Public Enemy No. 1 and No. 2. But the anger may have been misplaced. At least to the guys who cover the team regularly like Ryan Divish and Larry Stone. Both guys spent some time yesterday on the subject and let Wedge make his case. You can read what the manager had to say – they both gave him ample room on their blogs to present his side of the story – and make up your own mind. But one thing's for certain. If the M's make a change over this, then they are destined for eternal mediocrity. And aren't worth following. There may be good reasons to make a managerial change, but this isn't it.

• WSU: For a Wednesday in late May, yesterday was chock full of football items. Christian Caple got us started with this blog post containing the news the Whitman County prosecutor will not prosecute anyone connected with the Mansel Simmons injury. ... Christian came back later with another blog post after the Pac-12 and its broadcast partners announced some of the starting times for football games. The Apple Cup will once again be midafternoon on Black Friday. ... Jon Wilner chimes in on the game-time news.

• EWU: There is some Eastern news in the Seahawks' section below. ... Portland State, which struggled last basketball season, is trying to improve its roster quickly, announcing four signees in the late period. The quartet includes three junior college transfers and a senior-to-be from Long Beach State.

• Preps: Greg Lee has one of the more heartwarming stories of the month today, a feature on Mead runner Andrew Gardner (on left in picture) and how he and his teammates are trying to help women in Ethiopia, Gardner's birth country. ... Greg was also at the 20th Jack Blair game last night, only the second won by the Region squad. ... We would be remiss to skip this blog post yesterday from the News Tribune's Todd Milles on a controversy from the 2A soccer title match. Pretty interesting stuff and reminds me of many of the sportsmanship discussions recently from the golf world. Such incidents are not good for anyone.

• Shock: Kickers often have a tough time proving their bonafides to the rest of the football team. And it probably doesn't help when the coach puts all the onus of post-practice running on their shoulders as Shock coach Andy Olson did yesterday. Jim Meehan has the story in his weekly notebook.

• Mariners: Even the greatest closer of all time – cough, Mariano Riviera – blows a save now and again. So maybe we shouldn't get too worked up Tom Wilhelmsen blew one last night. Though it was his second consecutive mishap. And that is worrisome. So is another 10-inning defeat, this one 3-2 at San Diego. ... Justin Smoak is about ready to begin playing once again. ... With Smoak and Mike Morse hurting, the M's sent Brandon Maurer to Tacoma and recalled Alex Liddi, who was not in the lineup. A pitching decision will be announced later this week.

• Seahawks: Former Eastern receiver Greg Herd, who signed and then was cut by the Dallas Cowboys earlier this year, inked a free agent deal with the Hawks yesterday. Seattle had a busy day on the roster front. ... The most recent addition to Seattle's secondary isn't built like the rest of the group, but he hits like them.

• Sounders: The Sounders have won the U.S. Open Cup three times in the past four years. Last night they played their first game in this year's tournament. They are done, losing 1-0 to Tampa Bay, an NASL team. The MSL, America's top league, lost four teams in the tournament's third round.

• Sonics: Art Thiel wishes expansion had been the first option to bring back the NBA, but the NBA – and our friend David Stern – wouldn't let it be.

• No radio today as the M's play a day game and the Miami/Indiana game follows right after. So we have the afternoon off. We'll be back here tomorrow. Until then ...

Posted May 30, 2013, 7:24 a.m.
By Vince Grippi
vincegrippi55@yahoo.com
Vince Grippi is a freelance local sports blogger for spokesman.com. He also contributes to the SportsLink Blog.