If things start going bad for you today, just remember this. The day is probably worse for Gordon Gee. Read on. 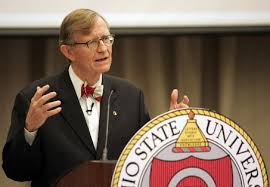 • The president of Ohio State University had to apologize again yesterday when comments he made last year came to light. He was joking, of course, but said some things he probably shouldn't have about Catholics, Notre Dame and the folks in the SEC. Though the SEC comments, when taken in context, were pretty funny. Someone asked Gee about jokes being made in SEC country concerning the Big Ten, seeing as Ohio State's conference now has 14 members. As the question went, what would Gee say to SEC fans who say the Big Ten members can't count. Gee's response had something to do with when they can read and write, they can figure out what the Big Ten is doing. So basically Gee, who used to be a president of an SEC school, was doing what a lot of us do, respond to a joking insult with another joking insult. But taken out of context it's seems pretty mean – and even in context probably not something a university president should be saying outside of a bridge game with his friends. When the Associated Press reported Gee's comments, made to Ohio State's Athletic Council, yesterday, the stuff hit the fan. And Gee, who has been in trouble before, had to apologize again. Plus, this time Gee was put on a "remediation plan," which sounds a lot like double-secret probation to me. Maybe some day you'll hear Gordon Gee mutter, "damn, seven years of college shot to hell," or something to that effect.

• WSU: The Cougars picked up their fifth commitment for the 2014 football class and Christian Caple has all the particulars, and links, in this blog post. ... Ted Miller at ESPN.com's Pac-12 blog, lists all the players who he believes will put up 1,000 receiving yards next season. ... Phil Steele released his preseason All-Pac-12 teams. No Cougars were on the first team but two, safety Deone Bucannon and kicker Andrew Furney, were on the second. ... The NCAA should release its report on Oregon in the next couple weeks.

• Gonzaga: John Stockton's autobiography will be available the end of October. Put it on your reading list.

• Idaho: The Vandals have filled out their football coaching staff. Josh Wright has the information in this blog post. 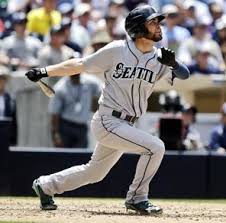 • Mariners: So is Nick Franklin (pictured) Roy Hobbs? Heck, is he the next Mike Trout? Or should we just be happy he hit two home runs yesterday – his first two in the bigs – and leave it at that? The Mariners hit five home runs (one of them by Brendan Ryan, who thought it was going foul) and Felix Hernandez shined at Petco Field, again, as the M's won 7-1 to split the four games with San Diego. Today it's on to Minnesota for the M's.

• Seahawks: Jermaine Kearse is seeing the ball better this offseason. There is a reason for that.

• Sounders: The up-and-down nature of the season was illustrated perfectly this week. Part of the problem might be players being rotated in-and-out, thanks to national team duties.

• We're back on the radio today, albeit for just an hour. We'll be with Keith Osso and Rick Lukens starting at 3 p.m. on 700 ESPN. Listen here if you like. Until then ...

Posted May 31, 2013, 8:14 a.m.
By Vince Grippi
vincegrippi55@yahoo.com
Vince Grippi is a freelance local sports blogger for spokesman.com. He also contributes to the SportsLink Blog.