It doesn't take all that long for a fan to lose faith, does it? Sometimes it is a week-to-week thing. Other times it's cumulative. And often it's a combination of both. Read on. 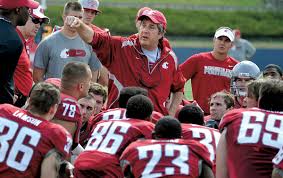 • We wrote some yesterday about WSU's disappointing loss to 25th-ranked Arizona State on Thursday night. The disappointment for Cougar fans came, as far as I can tell, from the team's seeming inability once again to compete. That lack of a competitive attitude, exemplified in a 21-0 lead for the Sun Devils right off the bat, came on the heels of a fourth-quarter blowout by Oregon State and a methodical destruction by No. 2 Oregon. The cumulative effect has led some Cougar fans to lose faith in Mike Leach, last year's savior. How do I know? I listen to people talk. I pay attention to fan sites like Cougfan. I follow Twitter. I monitor our comments. And, for the first time, there was a real undercurrent of dissatisfaction. There were complaints concerning the way the defense is playing, the way the offense is playing, the way the special teams are playing and, in true egalitarian fashion, how much money Leach is making. The on-field concerns are valid, if a little too early in my mind. This is just Leach's second season in Pullman and, though there was talent built up during Paul Wulff's tenure, each coach wants their own players – or at least their type of players. That takes a while. Leach is still building the foundation he wants. Until that foundation is built, we really don't know whether or not Leach's Air Raid offense, and his overall football philosophy, will work in Pullman. But the money, that seems silly to moan about, even if Leach is making three times what the Cougars were paying Wulff and the results have not appreciably improved. In a lot of ways, Leach is like a stock Bill Moos invested in. By selling Wulff, who may have been on the cusp of turning the Cougars into a competitive product, and buying Leach, who won at Texas Tech while, for better and worse, attracting national attention, Moos invigorated the WSU fan base. It was needed. Look, I believe if Jeff Tuel had not been hurt against Idaho State and Oregon State, costing him most of the 2011 season, the Cougars would have won at least six games and gone bowling. His current employment in the NFL shows the talents he possessed. But Tuel did get hurt and the Cougars didn't win. The fans – and boosters – were bailing on the program. Moos was at a crossroads. He had achieved his greatest accomplishment, convincing the Pac-12 powers-that-be to distribute their new-found media wealth equally, something the conference had never done. And it still begrudges, considering conference commissioner Larry Scott was quoted by John Blanchette last night as saying “schools like Washington State have disproportionately benefited” from the wealth. Geez, it almost sounds as if Scott and the USC, Oregon and Stanfords of the world resent having WSU in the conference. Whatever. Moos had the money. It was available to bring the Cougars' football facilities into the 21st Century, to try to keep up with the West Coast Jones. But he needed to fill the luxury suites and seats. A winning team would probably have done that. But the Cougars were 4-8 in 2011. Something else had to be done. Enter Leach. And the money flowed. That, however, came with a bill: higher expectations. Expectations the Cougars have only reached occasionally in the past two years – last season's Apple Cup, the USC game this season, against hapless Cal a few weeks ago. But the last three games' struggles have unleashed the hounds a bit, if only on social media, talk shows and fan websites, the petri dishes of college football's negative vibes. It happens. But in a sense it doesn't matter. Leach's hire has served its purpose. The south side of Martin Stadium has been transformed. The football operations building is taking shape and will be open next year. The culture in Pullman will never be the same, whether you are excited about the new direction or mourn the loss of innocence. Winning, that's still a crapshoot. The last few weeks have been snake eyes. The last three regular season games might either come up craps or sevens. The season will end, the plusses and minuses will be weighed and the days will pass. And no matter who occupies the sideline for WSU (or the athletic director's chair), they will be doing their jobs in a place that is markedly different than it was three years ago.

• WSU: By the way, I'm sure there is a silent majority of WSU football fans that back Leach 100 percent. They are just waiting for the corner to be turned. But the old cliché, the squeaky wheel gets the grease, seems appropriate for the college athletics bandwagon. ... Jacob Thorpe spent some time yesterday looking back at Thursday night's loss and the bye week that preceded it. He also covered Friday night's exhibition basketball game at Beasley and posted the box score. Jacob has his usual morning post with links. ... USC ran over Oregon State in Corvallis last night, meaning today's Pac-12 slate is a bit thin. ... ESPN.com's Pac-12 blog has its usual Friday mailbag. I would have answered the first question a bit differently. ... The Huskies will hold a closed scrimmage with Portland today.

• Gonzaga: The exhibition season is in full swing, with BYU hosting Alaska-Anchorage tonight and San Diego having rallied for a win earlier this week.

• EWU: The Eagles are in Pocatello today for a matchup with Idaho State, coached by former Eastern head man Mike Kramer (pictured). The Bengals have taken some big strides since last season. Jim Allen has an advance in the paper this morning and had more on the blog last night. ... Portland State is nursing injuries but won its basketball exhibition.

• Idaho: The Vandals will host Texas State today in the Kibbie Dome.

• Chiefs: Spokane got back on the winning track at Vancouver last night with a 6-4 victory. ... With the Chiefs returning home, Chris Derrick has a feature on defenseman Jason Fram (pictured). ... Medicine Hat defeated Tri-City in a shootout while Portland extended its winning streak to 10 games.

• Preps: Shadle Park rallied to win a share of its first Greater Spokane League football title since 1999 with a 43-20 win over Lewis and Clark last night. Jesse Tinsley has photographs from Albi. ... Gonzaga Prep earned the league's second 4A playoff berth with a 49-27 win over Central Valley. Greg Lee has the story and Jesse also has photos from that game. ... U-Hi rallied from a big halftime deficit to earn a 3A berth with a 25-24 win over North Central. ... Host Pullman edged West Valley in GNL action. Thomas Clouse was there. ... Freeman just continued to roll, routing Medical Lake. ... We can also pass along a roundup of other Friday night games along with a scorelist and box scores from last night. ... There is also this roundup of soccer playoff matches.

• Seahawks: Though Marshawn Lynch hasn't practiced much this week, he will play Sunday. ... Lynch tried to put his legal troubles behind him yesterday but a judge wouldn't budge. ... The Hawks' defense has been especially stout in the fourth quarter. ... Some injured players are inching closer to playing.

• Sounders: It's playoff time in Seattle and that means goals will be at a premium. Especially for the Sounders, who have always struggled to score in the first leg of a two-match series. ... Both the Sounders and the Timbers will be without key players in tonight's match due to injuries and other things. ... Playoff time also means awards time.

• Mariners: The Mariners cut ties with more than just Franklin Gutierrez and Joe Saunders yesterday (refusing to pick up their options). They also said goodbye to bench coach Robbie Thompson. That seems to excise one name from their managerial-prospects list, though another was added yesterday: broadcaster and former catcher Dave Valle.

• That's it for this morning. Enjoy your Saturday. My schedule is packed and, if the rain holds off and I can get outside on leaf patrol, will be packed even more. Until later ...