If you like violent, aggressive defensive football, than the past couple days has been nearly perfect for you, especially around here. It started with the Cougars and USC going toe-to-toe in the Coliseum, with WSU winning in the end. It finished yesterday with the Seahawks butting heads with Carolina and emerging with a 12-7, NFL-season-opening victory. Read on.

• A couple of takeaways from the Seahawks game with the Panthers: Watching an NFL game on the DVR in the evening is just about right – when the good guys have won – and Russell Wilson is a 12-year veteran – has to be. A near-perfect Sunday afternoon in mid-September is best spent on the golf course, if you can keep from finding out the score of the Hawks game. I couldn't do that, mainly because my curiosity got the most of me and I had to check the phone. But knowing that Seattle had won made it easy to avoid any details and whetted the anticipation for the evening's entertainment. And the best part of it? Other sports fans understand. If they know you are waiting to watch, they have little trouble respecting the code of the DVR. They bite their tongue, smile or frown depending on the circumstances – oftentimes the opposite of what you really happened just to be "that guy" – and do whatever they can to alert others of your willful ignorance. It's expected and appreciated. 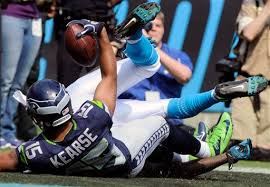 • As for the Hawks themselves, I came away with three points about the offense after watching the game, some plays a lot more than once (another benefit of an unhurried DVR viewing). The first was a negative one. The Seahawks' offensive line got manhandled a bit. If you wondered what was wrong with Marshawn Lynch the answer would be "nothing." The line didn't open holes and it couldn't get to the second level. That kills a running game. But I don't worry about the line, mainly because Tom Cable is a really good line coach and the group will improve. But it wasn't good yesterday. The second obvious point is Jermaine Kearse has really improved. His touchdown catch yesterday was the type of play Steve Largent used to make. The ball was in a place the defenders couldn't get to and only Kearse could. But to get there he had to twist his body awkwardly, leave his feet and hit the ground unprotected. All that while his momentum took him away from the quarterback. Kearse pulled it off. A professional catch by a guy whose hard work has made him a professional receiver. Finally, Wilson is pretty darn good. The running game wasn't there. The Panthers weren't going to let him use his feet. The Hawks needed a fourth-quarter score to win. And Wilson came through. His confidence belies his age and experience. Now he wasn't perfect. There was a time in the middle of the game he seemed in a hurry to try to exit the pocket, though the Panthers had all the doorways blocked. When that happened, Wilson was in trouble. But as the game wore on, he settled in, accepted the role of a pocket passer and delivered the ball on time and in the right place. His throw on the touchdown was perfect. His throws during the final, clock-killing drive were perfect. He wasn't perfect, but he was a winner. And that's what mattered Sunday.

• WSU: The Cougars will get to talk about a Pac-12 win this week, not a common occurrence the past few years. Christian Caple will be there and will report back here on the blog. Before then, however, he has a story on the Cougars winning attitudes, a blog post following last night's easy practice and a morning post. ... Washington State has moved all the way up to sixth in the ESPN.com Pac-12 blog's power rankings and is still included in the bowl projections. ... Damante Horton earned a helmet sticker and there were some lessons learned over the weekend.

• Mariners: Erasmo Ramirez did his part, throwing six shutout innings. Kendrys Morales did his part, belting a second-inning home run, part of a late-season salary drive for the designated hitter. But the M's bullpen didn't pull its share of the weight, surrendering the one-run lead. The result was a 4-1 loss to Tampa Bay.

• Seahawks: We focused on the offense in the section above, but credit for this win probably goes to the defense. They bent a few times – and snapped during an early Panther touchdown drive – but they didn't break, especially at the end. An Earl Thomas' forced fumble with about 5 minutes remaining kept Carolina at bay and the offense ran out the clock for a 12-7 win. ... Pete Carroll and his players had a lot to say afterward, some of it in the mea culpa genre but mainly just about how happy they were to win. ... Like most games, there were about five big plays that decided it. ... The early Eastern Time Zone victory (a rarity over the years for Seattle) gives the group confidence – and a list of things to work on – as the head into an early season showdown with San Francisco next Sunday night.

• Sounders: The Sounders have been red-hot at home and that's carried them to near the top of the Western Conference standings. The leader comes to town Friday night.

• Sonics: The greatest Sonic of all-time, Gary Payton, was inducted into the basketball Hall of Fame yesterday.

• I've been replaced. My son wanted to know what the weather would be like today and I couldn't help him. Buried in my writing and research since I got out of bed, I couldn't help him. So he asked Siri. She told him it would be nice. And she did it in a much nicer voice than mine. She is now his go-to weather person. Dang it. Where was she when diapers needed to be changed a couple decades ago? Until later ...