Memory can be a funny thing. There are times when you can't remember where you put the car keys when you walked through the door five minutes previously. And then there are faces from 40 years ago that you can't forget. Read on. 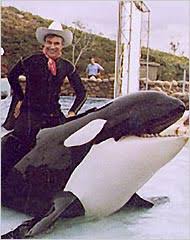 • "If you need a better car, go see Cal. For the best deal by far, go see Cal. If you want your payments low, if you want to save some dough, go see Cal, go see Cal, go see Cal." If you liked watching late-night wrestling in the 1960s and '70s in Southern California – and I did – then there was no way to escape Cal Worthington's commercials. The guy was so uncool he was cool. A big white hat. A hard-to-place accent. And the shtick. Oh, the shtick. The car salesman as next-door neighbor. Cal and his dog Spot. Except Spot was never a dog. Nope. A hippo maybe. An ostrich, a llama, anything but a dog. Yep, Cal Worthington was a one-of-a-kind huckster, except there were guys like Cal all over America, selling cars through the medium of television in its early days. Now Cal is trying to get through the pearly gates, where only Noah has a menagerie of equal status. Cal Worthington died on Sunday at the age of 92. That means he lived a long, full life, which is the ultimate cool. After all, he gave a lot of people a lot of laughs – and sold a whole bunch of cars – over the years. Cal used to do live spots on television during telecasts of Southern California sporting events and that led to some really outrageous situations. My favorite was the time (I do believe it was during a Rams game) when Cal's "dog" Spot was an elephant, an elephant with flatulence. Extreme flatulence. You could hear it on TV and you could almost smell it, because Cal's facial expressions told the entire olfactory story. He could barely talk. He perched behind the elephants head, stuck up there as the clouds wafted by his head. There were off-camera utters of "oh God," and the like. It was hilarious. And probably enticed more than a few people to buy a car from Cal, in pity if for no other reason. We laughed about it for a week at school. Did the Rams win the game? Who knows. But Cal, he won us over. So long Cal. And thanks for the memories, one minute at a time.

• WSU: The Cougars have got to put the USC win in the rear-view mirror or there will be a wreck this weekend when Southern Utah comes to town. That was Mike Leach's unspoken message yesterday when he met the media. Christian Caple has video of that press conference, along with video of Dom Williams, Ioane Guata and Pac-12 defensive player of the week Damante Horton. ... Christian also has a story on Horton's honor, the first look at Southern Utah and his morning post. ... A Southern California newspaper has a story on Daquawn Brown's first collegiate game. ... ESPN.com's Pac-12 blog has a Tuesday mailbag (quick summary: USC sucks) and a look at this week's Pac-12 games.

• Gonzaga: The Zags announced their basketball schedule yesterday and Jim Meehan was all over it with a couple blog posts and a story in the paper. ... Women's coach Kelly Graves received a commitment from a 6-foot-3 senior forward from Montana.

• EWU: Jim Allen will be back at practice this week as the Eagles prepare for Toledo. He has a morning post with links. ... Weber State will try to bounce back against Utah State after yielding 70 points to Utah. ... Eastern coach Wade Benson is the main subject of Jim Meehan's volleyball notebook this week.

• Idaho: The Vandals have their work cut out for them against Northern Illinois on Saturday. Josh Wright has a few notes in this blog post.

• Preps: It is a challenge to follow a legendary coach, as former Gonzaga volleyball and basketball player Elaina Renius (pictured) is finding out at Mead High. Chris Derrick has the story of Renius succeeding the ultra-successful Judy Kight as part of his volleyball preview.

• Locally: The Inland Northwest Sports Hall of Fame will have a few new members next month and I actually know a couple. Heck, I used to work with one.

• Mariners: Put another thing on the offseason list: Find a closer. If the M's are to be successful, they will have to do better than Danny Farquhar, who blew another save last night in a 6-4 loss to Houston. The blown save upstaged Taijuan Walker's fine effort in his last start and Abe Almonte's first home run (pictured heading into the Safeco right-field seats). But it was OK. There was no one in the stands. The 9,808 in attendance was the smallest crowd in Safeco history. Hey, a record! ... Felix Hernandez is going to miss another start with an injury that was supposed to be no big deal.

• Seahawks: The Hawks will host rival San Francisco this Sunday night and CenturyLink will be jumping. ... Russell Wilson is the key to the Seattle offense and it's not just his right arm that is crucial to the Hawks' success. ... There should be a couple of key players back who missed the Carolina game. ... The Seahawks running game left a lot to be desired against Carolina. And Pete Carroll desires more.

• Sounders: Their late-season run has put the Sounders right in the middle of the Supporters Shield race. ... The U.S. National Team will host Mexico tonight in a huge World Cup qualifying match.

• If you're still wondering what an old car dealer has to do with sports, I'll admit it is peripheral. But, as I said, his commercials kept wrestling on the air for years and he loved to be on live sporting events, so there is that. My memories of Ram and Laker games (the Dodgers were too high-brow to air Cal's commercials as I remember) are somewhat entwined with Cal. Until later ...