The answer to the question in the headline is yes. Where it will occur, I'm just not sure. Read on. 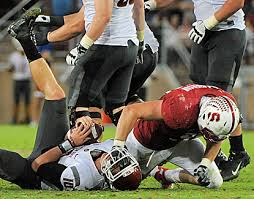 • There are always upsets in college football. It's a given. Heck, even mighty Alabama lost last year, though it didn't derail their national title hopes. It never does for the anointed SEC title team. However, if Washington State were to upset fifth-ranked Stanford tonight at CenturyLink Field – where the weather is expected to be akin to something out of a Wolfgang Petersen movie – then the Cardinal's national title hopes would disappear faster than a hot dog at Joey Chestnut's backyard barbecue. Which is part of the reason I don't believe the Cougars will win tonight. Yes, they can compete with the Cardinal, which is light years from where they were a few years ago. And, yes, a team that throws the ball 60 times a game, as the Cougars are known to do, with a big-armed quarterback is a threat to put up a bunch of points on the board. But I just don't see it happening. As improved as the WSU offensive line is – and it's much better than the past few years – Stanford's front seven is the best WSU has faced. Better than Auburn's and better than USC's. Yes, it's better than the Trojan group that put the shackles on the Cougar offense. The difference tonight is, unless Stanford just self-destructs, the Cougar defense can't win the game alone. The Cardinal offense can move the ball and their special teams are solid. Unlike the USC game, Washington State's offense will have to score – not just maintain possession – to give the Cougars a chance. To do that, the offensive line will have to give Connor Halliday a pocket to throw in. I'm not sure it can, at least consistently. Without a place to step up, Halliday (and any quarterback) is vulnerable to inaccurate throws. If that happens, if WSU turns the ball over whether it be by interception or, like last week, fumbles, then Stanford is good enough to make it pay. That's what I see happening. Let's call it Stanford 28-14 and see if the Cardinal drop any spots in the polls.

• By the way, if the weather is anything like predicted, you know, Noah-like, then all bets are off. A wet football does funny things, as do wet shoes. (Remember the Oregon State game – pictured – a few years ago?) Nothing like seeing a defensive back slip and fall on a quick slant that then breaks for 86 yards. I used to believe wet conditions favored running teams. I'm not so sure anymore. However, wind, especially strong wind, is another factor. I know that hurts passing teams. Put them both together, as is expected tonight, and the offenses usually turn real vanilla. And who knows what might happen.

• WSU: Just so you know, we might be a bit late tomorrow with the blog post, thanks to tonight's late WSU start. But I still intend to say goodbye to Christian Caple in this spot, though lack of sleep will probably make my adieu hard to understand. Which is perfect considering most of what I write is hard to understand. Not so the case for Christian. His advance of tonight's game is easy to read, as is his blog post this morning. Christian also has a two-minute drill with keys to the game. ... There is other football news, including this story from the Olympian on a former player suing the school and coach Paul Wulff over his concussions. ... We also can pass along a couple preview items from San Jose and a look at today's Pac-12 games from ESPN.com. Oh, and the mailbag. ... One basketball story to pass along. The JC point guard the Cougars brought in to help at the position? He's not practicing right now. A "violation of team rules."

• Gonzaga: Jim Meehan has a bit more on the blog in advance of Gonzaga beginning practice today. ... USA Today thinks the Zags might be Final Four contenders again.

• EWU: Jim Allen is in Texas, where it is a little warmer and drier than here. (One of the times I went to Texas to cover a college football game there was a hurricane, a Friday night contest and a drive out of Dante's Inferno.) He has a few posts on the blog today, including one that serves as an advance and one with links. His summary of today's game is also the lead of our college football roundup.

• Idaho: The Vandals will be in the Kibbie Dome today hosting a winless Temple team. Josh Wright will be there as well and he's also on this blog, with a preview of today's game and a roundup of news from Moscow.

• Preps: Talk about a busy, surprising night. First off, Shadle Park caught Gonzaga Prep the week after the Pups' huge win over Ferris and pounded them, 42-10 in the opener at Albi. Peter Sowards was there and has the coverage of the Highlanders first win over G-Prep since 1999. Then Mt. Spokane dominated Mead up front and won the Battle of the Bell 10-0. As Greg Lee's story points out, Friday's two Albi winners will meet next Thursday with the GSL lead on the line. After four weeks, Mt. Spokane is the lone undefeated team with Mead, G-Prep, Ferris and Shadle all 3-1. Before we move on, we want to remind you there are these Colin Mulvany photographs of the Albi action. ... In other GSL action, Central Valley improved to 2-2 with 48-7 win over North Central. Mike Vlahovich has the story. ... Over in Idaho, Lake City edged Post Falls 36-30 in a wild game, with Jim Meehan supplying the story and Kathy Plonka the photographs. Coeur d'Alene routed Minico 60-14 on homecoming night. Chris Derrick has the story. ... Around the area, Thomas Clouse was at Lind-Ritzville's 15th consecutive win, 27-13 over Reardan, and Steve Christilaw was in Cheney for Pullman's 29-26 comeback win over the Blackhawks to open Great Northern League play. ... We also can pass along the box scores and the scorelist. ... Our last prep link is the roundup of action in other sports.

• Chiefs: After three consecutive road wins to begin the season, the Chiefs are finally in the Arena tonight. Chris Derrick has an advance of their first home game and more in this blog post.

• Mariners: By now I'm sure you know Eric Wedge told the Mariners goodbye yesterday. You also know he was pushed out the door. And you also know how I feel about the whole deal. The franchise is a wreck. It's that simple. I'm about ready to pull the plug on them, at least in my personal life. We will still cover them here, it's our duty. ... Larry Stone has his opinion about what went down at Safeco yesterday. ... The young M's went out and showed Wedge (pictured in happier times) how they felt by pounding the A's last night. Wait, that didn't happen. They might have wanted to do, but even with Felix on the mound, Oakland is a better team – and a way-better franchise – right now. The A's breezed 8-2 and earned some home postseason games. ... By the way, check back with me in the spring. With the trees turning green and the flowers sprouting, I might just be back on the M's bandwagon. Hell, I'm a baseball fan.

• Seahawks: The biggest questions going into Sunday's game in Houston is who will be healthy up front on the offensive side of the ball. With Russell Okung already out, two more of the usual starters may not play either. That may not bode well for Pete Carroll's Hawks, especially not quarterback Russell Wilson. ...

• Sounders: CenturyLink is busy again this weekend. There is the WSU game tonight then the Sounders host New York tomorrow night, still hoping to get everyone healthy. I wonder which game will draw more?

• I know the Washington State game doesn't start until 7 tonight. And it's on ESPN, so that mean it won't be done until around 11. I get that. And I know the postgame call-in show I do each week with Dennis Patchin won't begin until around midnight. But if you have the Tunein Radio app on you phone, pad or computer, you can listen to our thoughts about the game, no matter where you are. Let's hope you do. Until then ...