After watching Connecticut win another national title last night, it hit me. The Huskies' win should give seventh seeds every year the realization even they can win the NCAA tournament. Seventh seeds with NBA first-round draft picks in the backcourt and athletic, defensive-oriented big men up front. Wait, not too many seventh seeds can boast that, can they? Read on.

• Really, the one thing that hit me last night is how badly the selection committee missed this season. There is no way Kentucky, with that talent, should have been an eighth seed. Or Connecticut a seventh. It points out the fallacy of making up the bracket based on the entire year. There was a time not too long ago the committee put more emphasis on how a team was playing down the stretch. In other words, they actually seeded a tournament based on now, not November. But the committee went away from that a few years ago. It seems kind of dumb. Kentucky started five freshmen. Five guys who had to learn how to play together. How to defend at the collegiate level. How to win. Of course they were going to be better in March than January, especially if they had a coach who knew what he was doing. John Calipari does. So making that group of future NBA players an eighth seed was not the best decision ever. And Connecticut? It was just a team that came together late, though it showed what it could do in glimpses throughout the season. The last loss Florida had before losing to the Huskies in the semifinals? Ya, it was to Connecticut in late 2013. The Huskies didn't start playing like a national title contender until the stretch run, which means the committee has to give them a lower seed. But the team that won the title last night was anything but a seven. 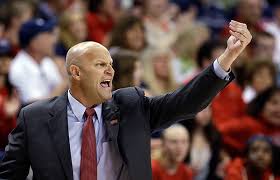 • It took all day yesterday, a day spent with Gonzaga athletic director Mike Roth and women's basketball coach Kelly Graves talking, with Oregon and Graves hammering out a deal, with Graves deciding, after family discussions, to move on to Eugene. He'll be introduced in a press conference this morning. He'll do well as the Oregon head coach. The Duck fans will love him. But now Gonzaga will have to replace him. Whoever gets the job will be facing major expectations. It's never easy to follow the most successful coach in a program's history. But Graves didn't leave the cupboard bare. Though the Zags lose three seniors, and the starting backcourt, there is a lot of talent returning. One thing, though. The postseason banquet is scheduled for Sunday morning at McCarthey. It should be interesting. And, I'm guessing, emotional.

• WSU: The Cougars extended the contract of their women's basketball coach, June Daugherty, yesterday. ... The football team gets back at it today with another spring practice. Jacob Thorpe will be there. He had a morning post today. ... If you like statistics, you'll like this post from ESPN.com's Pac-12 blog. ... California seems to be leaning toward one of two guys, including the head coach at my alma mater.

• Gonzaga: Besides the Graves' news, covered here by Thomas Clouse, Jim Meehan has a summation of the men's season in today's paper.

• Idaho: The Vandals hired a secondary coach with a long NFL pedigree. Josh Wright has the particulars in this blog post.

• Chiefs: So Victoria isn't going to roll over. The Royals took a 2-1 win over Portland last night in Canada.

• Preps: The soccer season is underway and Jim Allen catches us up with this story.

• Seahawks: Did you know the Hawks were better than anyone else in the NFL at blitzing last season? ... Richard Sherman is in the news again.

• Mariners: So we have to ask – not us, actually, but a couple of Puget Sound-area columnists – is the M's hot start just a mirage? ... The Mariners open the 2014 home season tonight with youngster James Paxton on the mound.

• Today is going to be TNDOTYTF (the nicest day of the year thus far). And I will be indoors. Yep, I am on the radio this afternoon. You thought I had given it up? Well, my packed schedule has made it tough for me to join Dennis Patchin and Rick Lukens until today. You can listen here between 3 and 6 p.m. as we entertain you leading into the Mariners' game. Until then ...