It was an up-and-down college basketball Thursday around here, with an emphasis on down. Read on.

• First the up. St. Mary's came to town last night featuring a big with a gaudy reputation. No, coach Randy Bennett wasn't here, he was watching on TV like everyone else, forced to sit because of NCAA violations. But he still had a better game than Brad Waldow and the rest of the Gaels. Waldow, considered one of the best posts on the West Coast, was completely dominated by Przemek Karnowski (pictured) and GU in the Zags' 73-51 destruction. Waldow was 1-of-8 from the floor, the Gaels were 15-of-47 overall and Gonzaga, despite one starter (Gary Bell Jr.) out, one (Sam Dower Jr.) extremely limited, one (David Stockton) dealing with the flu and one (Kevin Pangos) still struggling with a bad toe, routed its archrivals.

• Now the down. WSU was dealing with injury problems too – and had to face the No. 1 team in the nation on its homecourt. The results were not pretty. Ugly is probably a better word. Without leading scorer DaVonté Lacy and Dexter Kernich-Drew, both missing due to injury, the Cougars looked lost on offense. Now, a part of that is Arizona. The Wildcats play the Bennetts' Pack defense, and they do it with athletes Dick and Tony only dreamed about having in their WSU days. But the biggest part of Thursday night's debacle is the Cougars lack of firepower. Without Lacy, their most offensively skilled players are their youngest. The upperclassmen are all limited in some way, whether it be in quickness, shooting ability or the ability to get to the rim. Arizona is really good at exploiting weaknesses and the result was a 9-for-45 shooting night. Only one Cougar, Junior Longrus, had more than one basket. Check the box score for yourself if you don't believe me. The bottom line: The 60-25 defeat was one of the more embarrassing ones of Ken Bone's Pullman tenure.

• Eastern started hot (it led 10-0) but once again was unable to keep the home team off the boards and lost its Big Sky Conference opener at preseason favorite Weber State. The Wildcats won the rebound battle by eight and the game by seven, 74-67. The best note for the Eagles? Venky Jois seemed to get untracked in the second half. The sophomore had been in a bit of a funk lately but finished with 15 points and seven rebounds, getting back to the attacking force he was as a freshman. That bodes well for EWU down the road. 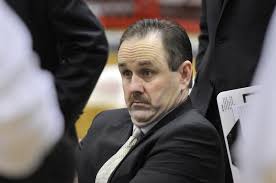 • Finally, Idaho opened WAC play with a home loss to Missouri-Kansas City. What did head coach Don Verlin (pictured) think about the defeat? Don? You there? Nope, he wasn't. Verlin refused to talk after the game. This seems to becoming a bit of an epidemic in the Palouse. I always thought one of the roles of a college coach was to teach young men how to deal with life and its problems. Ya, I know. Old-fashioned. But showing them the best way to deal with problems – yes, some coaches believe dealing with the media, answering their intrusive questions, explaining what happened, is a problem – is just to ignore them certainly doesn't bode well when it comes to winning either. You don't want to answer questions? Ignore your postgame responsibilities. Maybe that works on the court as well. Having troubles hitting free throws? Ignore it, don't work on them, the problem will go away. Having trouble guarding folks? Don't drill, don't practice, just ignore it, it will work out. Wait, that doesn't seem to be the answer. Either does hiding after games.

• One other thing concerning college basketball. When I wrote about Gonzaga the other day and the Zags success this season despite their injuries, I wondered how that could still be happening. A few people, who I know are WSU fans due to their comment history, mentioned on social media how poor the Zags' schedule was, as if that was the reason for their success. Well, I checked. Yes, Gonzaga's non-conference schedule wasn't as challenging as usual. That's true. But according to a couple of reliable RPI sources (including the ones on ESPN's site and Ken Pomeroy's), it was considered tougher than Washington State's – and of most of the Pac-12 schools. And Gonzaga had a better record than those schools. Yes, the WCC isn't as deep or as talented as the Cougars' conference. A conference schedule is what it is, that's not controllable. But a non-conference slate is put together each year. It can be as hard or as easy as you want it, for the most part. Year after year, Gonzaga plays as challenging a non-conference schedule as anyone on the West Coast.

• WSU: Jacob Thorpe was in Tucson last night, watching the Cougars score seven points in the first half. How I envy him. Not the basketball part, though a game in McHale is worth it no matter the outcome. No, being in Tucson, where lunch today would consist of a Double-Double, a cheeseburger, well-done French fries and large diet. All better than WSU's offensive effort last night. Jacob has the story and supplements it with a blog post from after the game. ... That's not all he had on the blog yesterday. He also had a video of his interview with SWX's Neil Stover and a piece on Bill Moos' son being a freshman high school All-American. Yes, someone actually comes up with a list like that. ... Finally, Jacob has a morning post with links from around the Pac-12. ... A couple of football-related links, including a look at the bowl results and a post on some interesting stats from the conference season. Connor Halliday's 89 pass attempts against Oregon are included in the latter.

• Gonzaga: Jim Meehan was in McCarthey last night along with John Blanchette, but there weren't a lot of students. That's too bad – and also the subject of John's column. Jim has the game story and a blog post from last night. He'll be back later this morning with a day-after post. ... Jesse Tinsley has a photo story as well. ... Around the WCC, Pepperdine went to 3-0 with a win over Santa Clara but everyone else besides Gonzaga already has at least one loss. Portland defeated visiting Pacific, USF handed Loyola-Marymount its first league loss and BYU and USD await their showdown this weekend.

• EWU: We have a story from Ogden in today's S-R along with one from the Deseret News in Salt Lake City. ... Elsewhere in the Big Sky, Northern Arizona went into Missoula and defeated Montana, Idaho State shot down Portland State and Montana State defeated Sacramento State. North Dakota also won, defeating Southern Utah. ... The Eastern women won last night.

• Idaho: Josh Wright was at the defeat and put together a game story and blog post without comment from the Idaho folks. ... The only other WAC game last night was in Arizona, with Grand Canyon earning a win.

• Preps: We have a roundup of Thursday night's limited action.

• Seahawks: Percy Harvin practiced. He looked good. We'll see. That, in a nutshell, was what happened Thursday. Oh, and Russell Wilson talked with the media. So did Richard Sherman. ... Is this the year the sun shines in Seattle?

• That is our report for today. We'll be back tomorrow. Don't miss it. Until then ...