So it's the Saints. Again. Good. Read on. 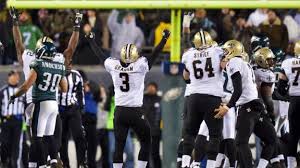 • Of the three teams that could have been in Seattle next Saturday, New Orleans seemed – on paper – the most favorable opponent. After all, the Seahawks had dominated them in a 34-7 regular season win. Plus the Saints aren't the best team in the NFL on the road. Finally, compare them against the 49ers, who have a one-game winning "streak" against the Hawks right now, and the Packers, who feature one of the more dangerous quarterbacks in the NFL, and the Saints come up a bit short. Which had me rooting for New Orleans last night – that and I want to read more of Steve Gleason's tweets next week; the former Cougar and New Orleans linebacker, fighting ALS, tweeted the game with his eyes last night and his comments were oftentimes hilarious and always inspiring. The Saints could also be a bit short-handed against the Hawks as well, as a couple of starters didn't finish the game due to injury. All in all, Saturday's outcome was not a bad thing for Seattle's postseason chances.

• I did a little math this morning – always a dangerous thing – and realized the oddsmakers in Las Vegas think Washington State will score 60 points against Arizona State. How's that? Well, the Sun Devils are favored by 11 points. The over/under is basically 131. Subtract 11 from 131 and that leaves you 120. Divide that by two and you have 60. So Vegas expects a 35-point improvement in WSU's offensive output from Thursday. That's a good thing, right? Of course, they still expect them to lose by double digits. And that's not a good thing if you are a Cougar fan.

• WSU: The Cougars are on one of those Thursday-Sunday Pac-12 road trips, so Jacob Thorpe got to spend another day in the warmth of Arizona – and, I hope, the loving embrace of the In-N-Out chefs. He did put together an advance of today's game along with a blog post yesterday and one this morning with links. ... Because this story covers all the local colleges, we put it here. It's actually about all the local officials who worked postseason games. It's a long list.

• Gonzaga: The Zags finished the four-game, WCC-opening homestand perfect, despite a less-than-healthy roster. Jim Meehan was in McCarthey last night and has a game story from the 86-64 win over WCC newcomer Pacific along with a blog post. He'll be back this morning with another post. ... It was an interesting night in the conference, with Portland breaking out fast against St. Mary's but fading as the game went on. ... USF handed Pepperdine it's first defeat of the conference season. ... There was also a blowout in Provo, as USD lost its third consecutive WCC game, this one to a BYU team with a new lineup. And Santa Clara handed Loyola-Marymount another defeat.

• EWU: The Eagles' losing streak didn't end in Pocatello last night, but their road trip finally did. Eastern lost to Idaho State, 83-72, but at least they head home for their next couple games. ... Of course, Montana, one of the preseason Big Sky favorites, and Montana State, which is playing as well as anyone in the conference, come to town this week. ... Portland State is also struggling on the road and fell at Weber State. ... Northern Colorado continues to play well. ... The Eastern women won again. ... North Dakota State handled Towson fairly easily yesterday in the FCS championship game, winning its third consecutive title.

• Idaho: The Vandals fought to the finish but fumbled away a chance to rally against Chicago State, losing 57-55. Josh Wright was there and has this game story – with UI quotes – and blog post.

• Whitworth: The Pirates had to rally, but a 25-point run in the second half lifted them to a 64-53 victory at Willamette. ... New football coach Rod Sandberg is settling into the job. Thomas Clouse caught up with him and has this story.

• Chiefs: There is just something about the Arena that seems to flummox the Everett Silvertips. Or maybe it's just the Chiefs. Either way, Spokane won 3-2 in overtime last night. Chris Derrick has the story and more in this blog post. ... Portland is struggling.

• Preps: Saturday's are for wrestling tournaments and yesterday was no different. Mike Vlahovich was at the one the U-Hi Titans won, the Pacific Northwest Classic. ... We also have roundups of boys and girls basketball action.

• Seahawks: The regular season is over so it's time to give the Hawks their final quarter grades. Here's a hint: the defense did well. ... Yes, Seattle will be playing the Saints on Saturday. ... If the Hawks don't win the Super Bowl, will it be a wasted season?

• We slept a bit later than normal today – when you get to be my age you'll know how good that feels – so we apologize for the later post. Yet, we feel so refreshed, it's hard to feel too bad. We'll be up earlier tomorrow, we promise. Until then ...