I don't know about you folks, but it seemed like a pretty good weekend to me. A good way to kick off the year, so to speak. And it isn't over yet. Read on. 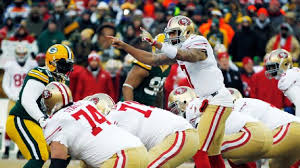 • Yes, it was the first sports weekend of 2104. And it's hard to imagine a better NFL weekend. All four games were exciting, even if, as was the case for me in the Chargers and Colts victories, you didn't have a dog in the hunt. A great comeback (Colts) is always fun to see, as is a team winning when it isn't supposed to (the Chargers are never supposed to win in the playoffs). The Saints win was fun in that they are always expected to self-destruct on the road – and in cold weather – while the 49ers/Packers game was just a good, hard-fought professional football game. Plus all the steam rising from the breath gave it an old-time feel. It would have been cool if someone would have made the game available in black-and-white, then it really would have looked like something out of the 1960s. Though all the tats would have given the year away. Still, it was a great weekend to watch pro football.

• The NFC final four, if you will, is as good as it gets, with the conference's four best teams meeting next weekend. That doesn't always happen, as it's not easy for teams to win on the road the first weekend. But New Orleans and the 49ers broke through and will travel to Seattle and Carolina, respectively. Those two games should be worth the three-plus hours each you will have to devote to them. Then again, if the Hawks should lose Saturday, you may not want to watch football ever again.

• And the college basketball this weekend wasn't bad either. I caught the final few minutes of San Diego State's upset of Kansas and was thrilled to see Xavier Thames seal the victory with some clutch free throws. Thames played his freshman season at WSU and was one of the nicer kids I covered in my tenure there. A true gentleman and competitor – and yes, those two things can go together. He's changed physically in his time at San Diego State but I hope his personality hasn't changed.

• WSU: The Cougars struggled once more, losing 66-47 to Arizona State yesterday afternoon. DaVonté Lacy tried to go only a week or so after his appendectomy, but lasted just a few minutes before having to leave the court. Coach Ken Bone said afterward Lacy was being checked out at a local hospital, which always tweaks my worry bone. We should know more later today. Jacob Thorpe was in the desert and filed a game story along with postgame videos of Bone, Que Johnson and Junior Longrus. He also posted the box score on the blog as well as pregame notes and a morning post with links. ... The Arizona Republic had coverage of the contest including a game story and some analysis. ... The WSU women finished a weekend sweep with a win over Arizona at home. ... ESPN.com's Pac-12 blog has a review of WSU's football season.

• Gonzaga: Jim Meehan returned to the blog yesterday for his day-after post from the Pacific victory. ... The WCC schedule is so odd. BYU and USD will meet Loyola-Marymount and Pepperdine again this week. They opened the season against each other just last week. Odd. ... BYU may be without one of its inside players.

• Seahawks: Sometimes the NFL is right on top of things. Take Marshawn Lynch and the media. The league figured out last week Lynch wasn't fulfilling his media obligations and fined the running back $50,000. The league just realized that last week? Doesn't anyone ever look at a Seattle paper? Heck, they are all right there on the Interweb thingee. ... The Saints realize how tough the Hawks will be in CenturyLink. After all, they have a history here. But they were kind of looking forward to having another chance. ... Golden Tate is starting to walk the walk a bit better. ... Yep, the Seahawks had a pretty good season.

• That's it for the column this morning. However, our day isn't done. We will be on the Patchin, Lukens and Osso show today – and all week. You can listen here. We go from 3 p.m. to 5 p.m. today due to the BCS national championship game, the last of those for, well, forever. Isn't that a welcome statement? Until later ...